When Tesla (TSLA) reported its earnings last week, they smashed all expectations, both on the top and bottom line. The immediate reaction was mixed, but then we saw the tech sector in general take a hit for a few days in a row, and TSLA did not escape the selling. Instead, it went from a high of 1689 the day after they reported to a low of 1366 by Friday, a nice 20% haircut.

Even before its report, there were multiple analysts and other market observers complaining about TSLA’s meteoric run higher and its bloated stock price. After all, the stock had run from just over $420 on January 1 to $1794 at its peak on July 13, a 4+ bagger in just over six months. Perhaps a bit much, with some type of correction making sense.

But regardless of what the critics have been saying about the stock, facts are facts, and the chart shows TSLA has been a sought-after stock that traders have been willing to pay up for. And that is why the company – along with many others that report strong numbers in the current economic environment – will remain at the top of the heap. Investors like winners, especially when they go on sale.

This is where the patience comes in. If you had chased TSLA right after they reported earnings, you wouldn’t be happy. But, if you could identify several areas of support and waited for the stock to move towards more attractive entry levels, you might end up with some nice profits.

For example, take a look at the chart below. I’ve identified 3 specific levels you might consider taking an equal 1/3 position. If all 3 levels were hit, the average cost basis would be $1182. The stop would be any close below the 50-day moving average, currently at 1097. So if the trade stopped out, that’s a loss of 7%. However, if the stock held, resumed its march higher and just got back to last Thursday’s high of 1689, that would represent a profit of 43% – a 6-to-1 reward to risk. Not too shabby! 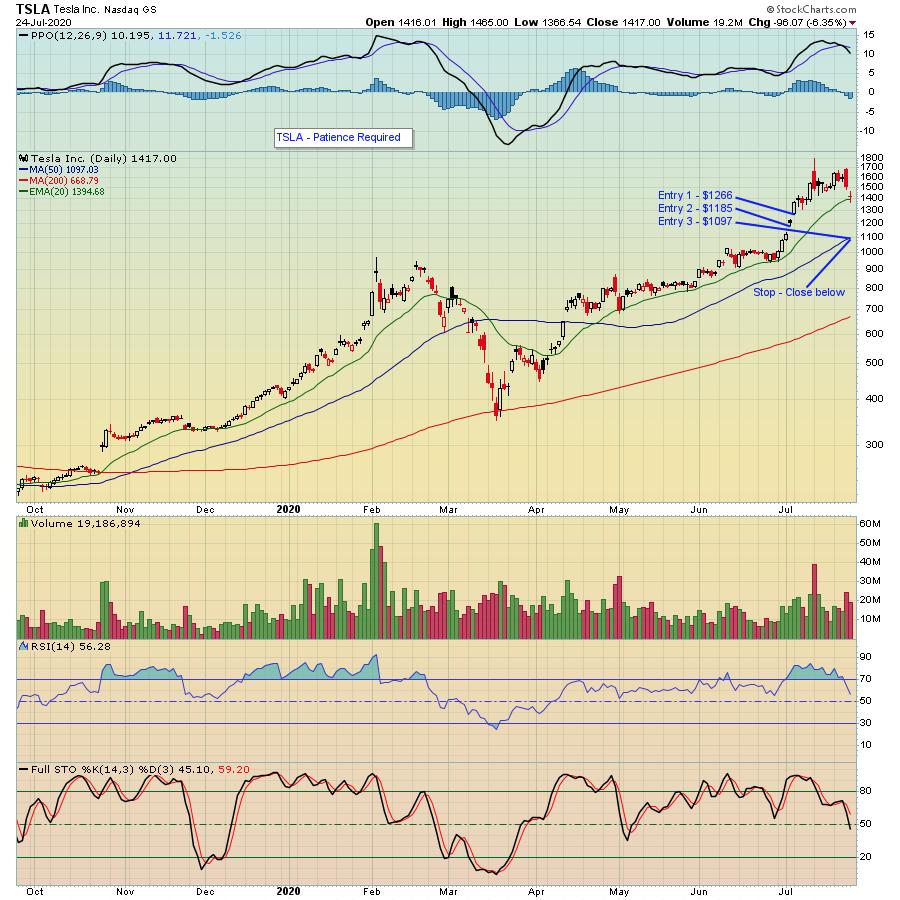 The whole point here is that we’ve already seen a number of companies that have easily beaten earnings expectations, yet have pulled back along with the market correction. And there will be many more that beat their numbers over the next several weeks that could also pull back, becoming high reward-to-risk trading candidates. So you need to be able to zero in on that group of stocks. At EarningsBeats.com, we track every earnings report; those that beat both top and bottom line expectations and have promising charts are added to our “Strong Earnings ChartList.” We currently have 210 companies on the list and will be adding many more as earnings season progresses. If you would like to access the full list, just click here to sign up for our FREE EarningsBeats Digest and the list will be sent to you.