July 20, 2020 admin
These indicators are mostly for travel and entertainment – some of the sectors that will recover very slowly.
—– Airlines: Transportation Security Administration —–
The TSA is providing daily travel numbers. 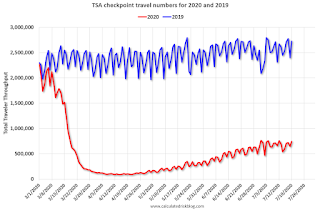 That is a decline of 73%. There had been a slow steady increase from the bottom, but the increase in air travel has slowed.

—– Restaurants: OpenTable —–
The second graph shows the 7 day average of the year-over-year change in diners as tabulated by OpenTable for the US and several selected cities. 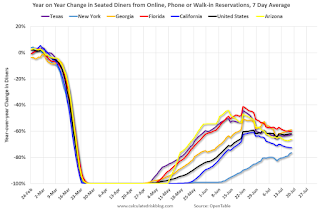 Florida is down 62% YoY.  Note that dining seems to be declining in many areas over the last few weeks (certainly due to the recent surge in COVID cases). 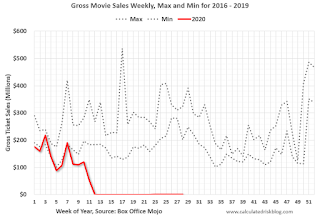 This data shows domestic box office for each week (red) and the maximum and minimum for the previous four years.  Data is from BoxOfficeMojo through July 16th.

Note that the data is usually noisy week-to-week and depends on when blockbusters are released.

Most movie theaters are closed all across the country, and will probably reopen slowly (probably with limited seating at first). 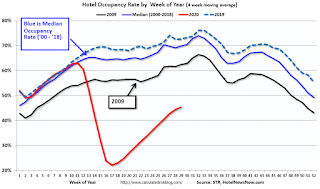 2020 was off to a solid start, however, COVID-19 crushed hotel occupancy. 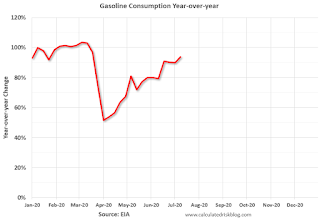 Note: I know several people that have driven to vacation spots – or to visit family – and they usually would have flown.   So this might be boosting gasoline consumption over the summer.

—– Transit: Apple Mobility —–
The final graph is from Apple mobility. From Apple: “This data is generated by counting the number of requests made to Apple Maps for directions in select countries/regions, sub-regions, and cities.” This is just a general guide – people that regularly commute probably don’t ask for directions.

There is also some great data on mobility from the Dallas Fed Mobility and Engagement Index. However the index is set “relative to its weekday-specific average over January–February”, and is not seasonally adjusted, so we can’t tell if an increase in mobility is due to recovery or just the normal increase in the Spring and Summer. 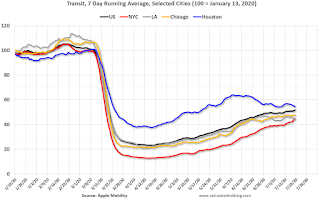 This data is through July 18th for the United States and several selected cities.

The graph is the running 7 day average to remove the impact of weekends.

According to the Apple data directions requests, public transit in the 7 day average for the US is still only about 52% of the January level. It is at 45% in New York, and 54% in Houston (down over the last few of weeks).