This means analysts will focus on the Department of Labor’s initial weekly claims report to be released this coming Thursday (covering the BLS reference week) for clues about the July employment report.

The consensus is for a 1.3 million initial claims, unchanged from the previous week. Some analysts are expecting an increase in claims this week related to bar and indoor dining closings in some states – and possibly also due to the end of some Paycheck Protection Program (PPP) agreements.  For example, Merrill Lynch economists are expecting an increase to 1.5 million initial claims in the report this week.

Another interesting data point will be released on Wednesday; the Census Bureau’s experimental Household Pulse Survey.

Note: Initially the Pulse Survey was planned for 90 days starting April 23rd.  Hopefully this program will be extended!

Ernie Tedeschi (former US Treasury economist) @ernietedeschi has pointed out that his survey was helpful in predicting the June employment report. 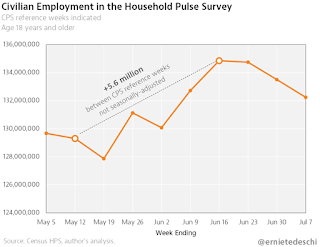 Seasonality & survey noise may be factors, but the HPS did an excellent job of anticipating the June jobs report.

The graph is from Ernie Tedeschi.

So we will need to look at two Pulse weekly surveys for hints about the July employment report.