“Engage people with what they expect; it is what they are able to discern and confirms their projections. It settles them into predictable patterns of response, occupying their minds while you wait for the extraordinary moment — that which they cannot anticipate.” –  Sun Tzu, The Art of War

Throw out the old playbook. We are near the point of Emergence in the Markets, the Economy, and People’s Lives as key technical indicators, pointing to an imminent upside breakout for stocks. While the mainstream investment gurus and economists search for the elusive V, L or U shaped recoveries, beyond their radar screen an entirely different process is being shaped by the ruling force of the Universe, Complexity, which acts in a purely nonlinear fashion and beats to its own drum independent of anyone’s opinion.

In fact, based on price chart and trend analysis and fueled by the Federal Reserve, as I describe below, we are well into a secular long term and meaningful change in MEL, the complex adaptive system composed of the markets, the economy and everyday people’s lives and financial decisions. Therefore, even as some are predicting a dismal outcome, investors should instead be paying close attention to the reality on the ground, not fighting the Fed or the market’s momentum and allocating their resources accordingly.

COVID-19 has hastened the movement in MEL toward what is known in Complexity jargon as the point of emergence; the series of events which culminates in a decisive move which delivers systems to their next level of operation – what stock traders call a breakout. Therefore, if the current trend remains uninterrupted, I expect the combination of the ongoing pandemic, the ensuing social unrest and the rising election uncertainty to tip the balance of people’s decision-making regarding where and how they live and work.

Moreover, this transition will affect how people spend their money. Thus, from a trading standpoint, it’s becoming increasingly clear where the next set of winners will materialize in the stock market. Incidentally, I discuss this topic below and offer further detailed guidance as to where the best places to invest are likely to be in my recently recorded “Charting the Second Half” outlook report titled “Taming the Uncertainty”, which you can find here and at the bottom of this page.

Certainly a currently-popular view is that the highly indebted global economy won’t be able to function much longer, especially under the weight of the pandemic, and that a double-dip recession or worse will deliver long-lasting economic pain. Yet, in many places in the real world, the jury is still out on these expectations. In fact, what’s actually happening is that MEL is adapting, albeit in nonlinear fashion. This means that the activity is not uniform and seems regionally uneven. Indeed, this lack of linearity is confusing to many, but it is in fact a naturally-occurring phenomenon and the central concept in Complexity.

Be that as it may, what is increasingly visible is that events are shaping humanity and people are reacting. One reaction which is increasingly evident is the migration from areas of the country where life is increasingly difficult to other regions where there is more opportunity; whether it’s a move to the suburbs or a move to a totally different geographic area. In other words, the system is acting according to the tenets of Complexity by adapting to the circumstances.

Of course, there are no guarantees of any particular outcome as Complexity has its own agenda. Certainly, not everyone is benefitting from the current situation, and it is entirely plausible that the mainstream is correct and the world’s economy will crash and burn. Nevertheless, it is at least equally plausible, and backed by price chart analysis and emerging data, that, instead of a declining economy, what we are actually seeing is an increased regionalization of the population and a concomitant reshaping of economic activity.

Indeed, in this space I have frequently discussed the increasing number of out-of-state license plates I see on the highways as I drive to work and the generally upbeat economic activity in my hometown of Dallas, Texas. Surprisingly, I am now seeing what seems to be an increase in the number of out-of-state license plates and U-Haul trucks from other states, along with an amount of large truck traffic on the highways as I haven’t seen in years. Moreover, my business channel checks continue to provide encouraging data, albeit somewhat spotty at times.

You can certainly argue that my observations are only those of one person and that, if I drove down a different highway, I might see a different picture. Yet the migration away from big cities is now manifesting itself in tangible data. For example, the most recent housing starts and housing permits data overwhelmingly shows that the new builder focus is on single-family units and away from multiple family units as demand for the former increases and demand for the latter decreases. In other words, MEL is on the move.

The Fed Has No Options without Dangerous Consequences

So what’s the bottom line? The old playbook – the economy drives the markets – is no longer operational. In the present, the tail (the market) is wagging the dog (the economy).

Therefore, even as the Federal Reserve has hinted that it wants to cut back its QE programs, the odds of them actually doing so seem remote because the stock market is now the number one factor influencing MEL. Thus, if the Fed stops QE and the market crashes, it will be the market’s crash, due to the Fed’s actions that will lead to an economic crash. Now, if you’re the Fed, you know this to be true, which means that the odds of a meaningful reduction in QE beyond what’s already in place is not likely to be in the cards.

Investors who are in tune to the changes in the markets, the economy and people’s lives (MEL) and how this complex adaptive system works will likely fare better than those who think of the world in traditional terms. A great example is the price action of DR Horton (DHI), the largest homebuilder in the U.S., which is a perfect MEL stock.

Here is how MEL works. The financial markets have become the primary driver in the economy as zero-interest rates push stock prices higher. This market effect raises the value of 401 (k) and other investment accounts. What then follows is that people feel as if they have some wealth and are more willing to spend, especially on big-ticket items such as cars and houses, which are sometimes financed by borrowing from retirement accounts such as 401 (k) plans. These decisions in turn drive the economy and the circle is completed as MEL moves onto the next level. 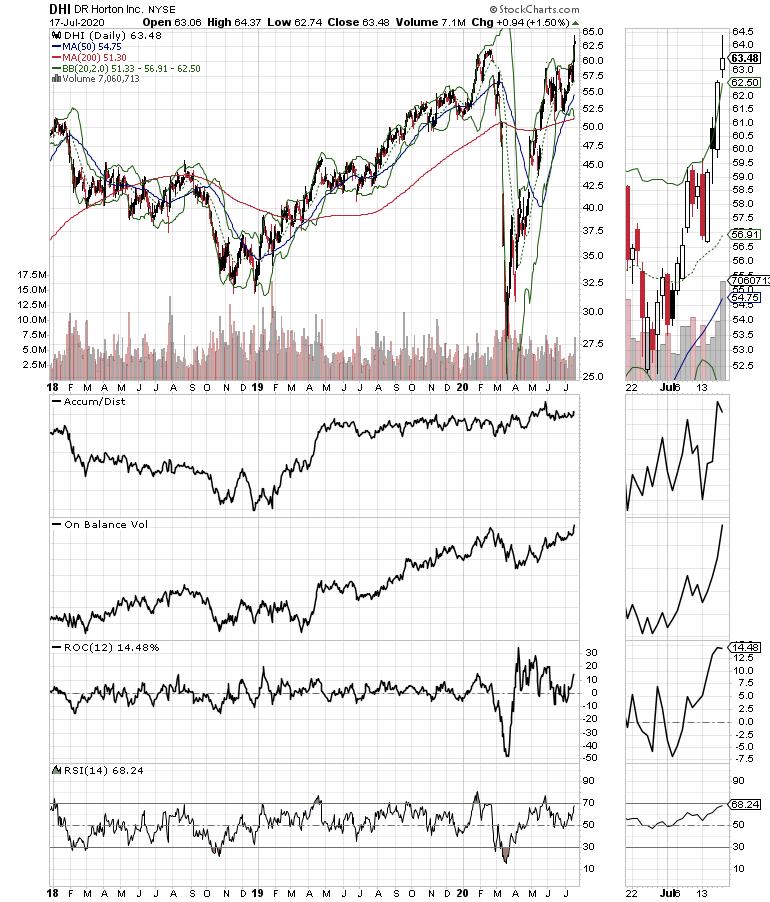 All of which brings me to DHI, a company which is a primary benefactor of the current state of MEL. Because it is at the demographics crossroads between millennials looking to form families and empty-nesters looking to downsize, the company has already benefited heavily over its last several quarters. Moreover, with low interest rates forever, rising demand and now COVID-19 and social unrest driving decision making, DHI is well-positioned to continue its steady business, which means that the odds of the current stock breakout holding and extending are pretty good.

Indeed, the stock just cleared a huge shelf of resistance at $62 on very encouraging Accumulation/Distribution and On Balance Volume. That’s a reasonable short-to-intermediate-term target, barring a market-related event or other external surprise is the $75 area.

I recommended DHI to my subscribers on 6/23/2020, well ahead of its breakout, and I have an entire portfolio of MEL stocks for your review via a FREE trial to Joe Duarte in the Money Options.com. Click here for yours.

Last week in this space, I noted that “the most interesting aspect of NYAD this week is the shrinking Bollinger Bands (green bands above and below the line). This is usually a sign that a big move in the market is coming. Moreover, there are some technical clues that suggest that the move, when it materializes, may be to the upside.” 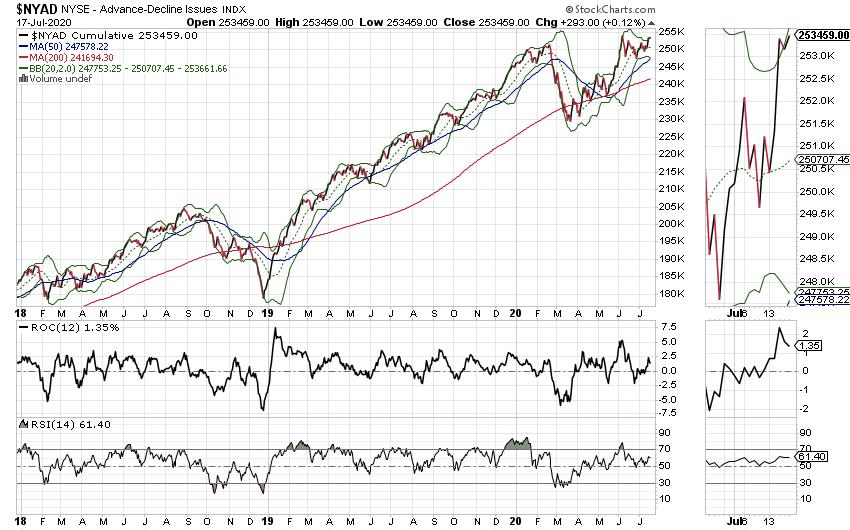 In fact, what we saw last week was a continuation of the same positive dynamic, as the New York Stock Exchange Advance-Decline line (NYAD) is on the verge of an upside breakout. Bullishly, NYAD found support at its 20-day moving average, moved steadily up and closed the week of 7/17/2020 at the cusp of a new high. Thus, barring something very negative, the odds favor a new up leg in stocks. 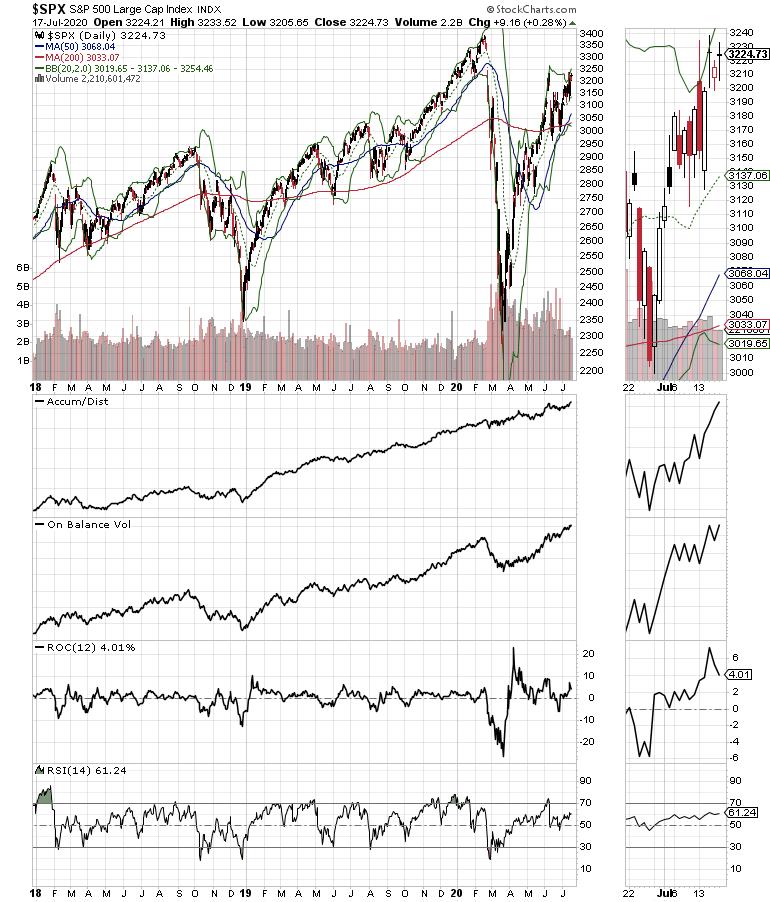 The S&P 500 (SPX) defended the support area near 3200, delivering another positive for the bulls. 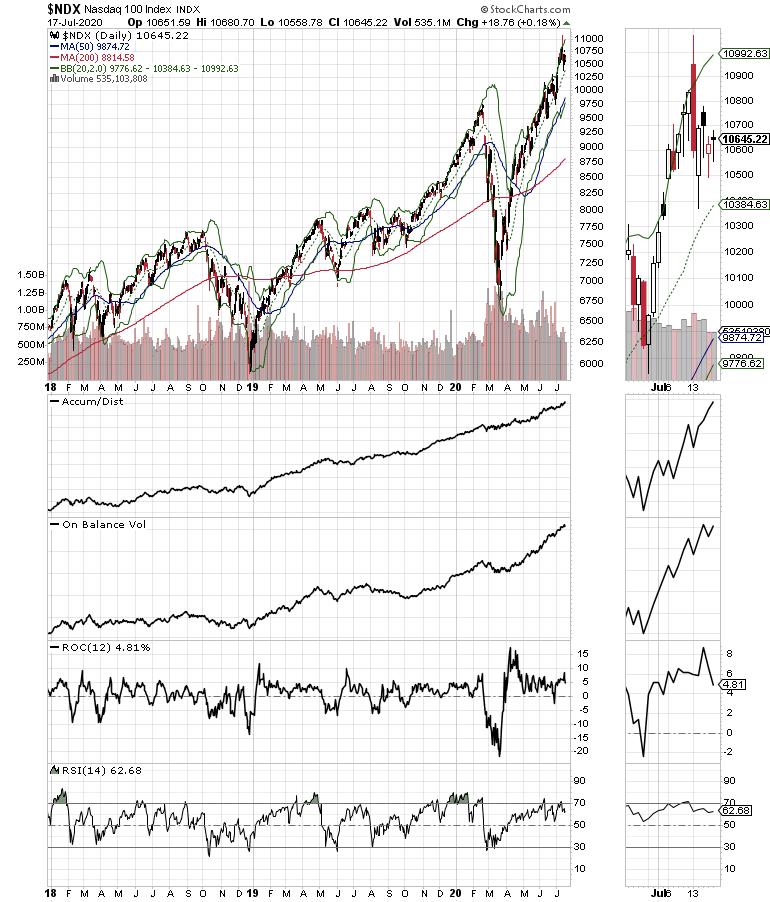 Meanwhile, the Nasdaq 100 (NDX) held above key short term support after some profit-taking. The stock had made a new high the prior week.

Trade What You See

The mainstream viewpoint is that the global economy will crash under the weight of insurmountable debt and that the stock market will follow. My position is that, as long as the stock market remains in an uptrend, there won’t be such a crash because the stock market is now the leading variable in MEL.

Indeed, despite the current pandemic and the ensuing and related consequences, the Fed’s mega QE, despite its recent slower pace of injecting money into the bond market, seems to be keeping the crash scenario from fully unfolding. What this means, only from a trading standpoint, is that the trend is up. Therefore, investors should be looking to make money on the long side as long as the trend and the indicators remain reliable.

Does that mean that we are reckless? Of course not; risk management remains highly important. As a result, keeping positions small, using sell stops and monitoring trades on a daily basis remain the basis of our success.

So what could derail what could be another up leg in the bull market? Aside from a truly extraordinary event, the fate of the markets remains in the Fed’s hands.

I own shares in DHI.