STR data ending with 23 May showed another small rise from previous weeks in U.S. hotel performance. Year-over-year declines remained significant although not as severe as the levels recorded in April.

“The steady climb in national occupancy continued, and to no surprise, the highest levels were recorded on Friday and Saturday ahead of Memorial Day,” said Jan Freitag, STR’s senior VP of lodging insights. “Occupancy gains continue to be led by popular leisure markets like the Florida Panhandle, Mobile, Myrtle Beach and Daytona Beach. We even saw a weekday-to-weekend ADR premium in higher occupancy markets.

“What was also noticeable in the week’s data was the higher occupancy levels across all classes of hotels. Economy properties continued to lead, but we also saw the higher-priced end of the market up over 20%. Regardless, Upper Upscale occupancy continues to lag the broader industry as meeting demand is still not returning.”
emphasis added 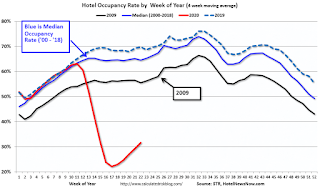