This gives a total of 8.14% delinquent or in foreclosure.

Today, the Data & Analytics division of Black Knight, Inc. (NYSE:BKI) released its latest Mortgage Monitor Report, based upon the company’s industry-leading mortgage performance, housing and public records datasets. As Black Knight Data & Analytics President Ben Graboske explained, despite record-low interest rates and record-high levels of tappable equity – the amount available to homeowners with mortgages to borrow against before reaching a maximum combined loan-to-value ratio of 80% – both the number of cash-out refinances and the volume of equity withdrawn via such loans fell in Q1 2020.

“Tappable equity rose by 8% year-over-year in the first quarter of 2020 to a record high of $6.5 trillion,” said Graboske. “What’s more, with mortgage interest rates hitting record lows, 90% of homeowners with tappable equity now have first lien rates above the prevailing market average. But while Q1 2020 saw overall refinance lending climb to a 7-year high, the number of cash-out refinances, as well as the dollar value of equity withdrawn via refinance, fell for the first time since early 2019. All in, cash-outs accounted for just 42% of refinance loans in the first quarter, roughly half of what was seen at the recent high in Q4 2018 and the lowest such share since Q1 2016. Likewise, the $38.7 billion in equity withdrawn from the market via cash-out refinances was down 8% from the prior quarter. Further, rate lock data – a good indicator of lending activity – suggests the trend is likely to continue, as the cash-out share of refinance activity has continued to fall throughout the second quarter.
emphasis added 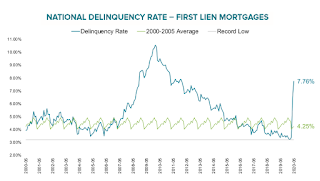 Here is a graph from the Mortgage Monitor that shows the National Delinquency Rate.

• The national delinquency rate jumped again in May, climbing another 1.3 percentage points to its highest level since December 2011

• May’s increase would have been the worst single month ever recorded if it weren’t for the 3.1 percentage point increase in the month prior

• There are now 4.3 million homeowners past due on their mortgages, including 200,000 currently in foreclosure

• That number has ballooned by more than 2.3 million in recent months after falling below 2 million earlier in the year for the first time since 2005

There is much more in the mortgage monitor.