July 27, 2020 admin
The GOP is scheduled to release their proposed Disaster Relief plan this afternoon. Based on early reports, their proposed package will be grossly insufficient. However, there will be further negotiations with the House, and the eventual package might be somewhat adequate.

If the package is inadequate, I’d expect the initial negative impact to be on retail sales and housing. In addition, I’d expect to see significant state and local layoffs over the next few months.

Retail sales for August will not be released until September 16th, but there are several high frequency releases on housing that I’ll be tracking. 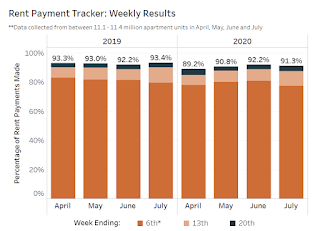 The NMHC has been releasing this data at several points during the month.

Note that this is a “survey of 11.1 million units of professionally managed apartment units across the country”. Smaller apartment owners are certainly performing worse.

We might see a significant decline in rents paid in August or September, especially if the extra Federal Unemployment benefit is cut substantially.

2) Weekly Forbearance Activity from the MBA and Black Knight.

This graph is from Black Knight.

If the Disaster Relief package is inadequate, we might see another increase in forbearance plans.

The Household Pulse Survey is scheduled to end this week, on July 29th, but hopefully the survey will be extended. 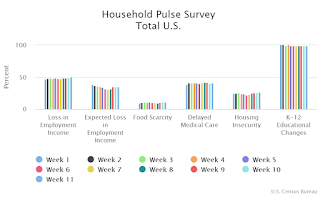 The most recent release of the Pulse Survey, for the period of between July 9th through July 14th, showed that 26.4% of households reported they missed last month’s rent or mortgage payment (or little confidence in making this month’s payment). This has increased from a low of 22.1% in the survey of June 4th – June 9th.

This will be a key number to watch.

In addition, I’ll be watching the High Frequency Indicators for the Economy that I’ve been posting every Monday.

Also, I’ll be looking for reports on credit card spending to get a hint about retail sales.