One of the major risks of the global slowdown is the number of companies that are forced to close due to lack of cash flow or credit risk. Jerome Powell jumped on the credit risk issue early on to avoid contagion in the USA. The Fed flooded banks with liquidity, bought ETFs, bought junk bond ETFs, promised to help in commercial real estate and talked about the use of unlimited tools. Recently, members of the Fed discussed controlling both ends of the yield curve so inflation could not arrive to create a problem.

With the currencies muted through currency swap windows between countries, there are no clues there. The Fed has taken huge precautions in front a global GDP implosion and flattened currency fluctuations to a mere blip.

Early on Friday, Jerome Powell talked up a situation where they are unlimited in their efforts. That becomes one of the reasons this market keeps going higher. There is no downside risk. While companies earnings may be 1/2 or 1/3 of what they were in 2019, the stock market continues to believe earnings don’t matter.

But this week there was even more actual action on debt. Japan announced the 2nd round of a “trillion dollar stimulus.” As Abe and Kuroda started seeing the public dissatisfaction rise with only $1T in stimulus, they doubled down with their largest ever for the second time in a month. With GDP expected to be down 20%, the Asian nation added $2.1 trillion US in government/Central Bank stimulus in May. It is not the time to be focused on a budget, the leadership said. The stock index closed up 7% on the week with such good news. 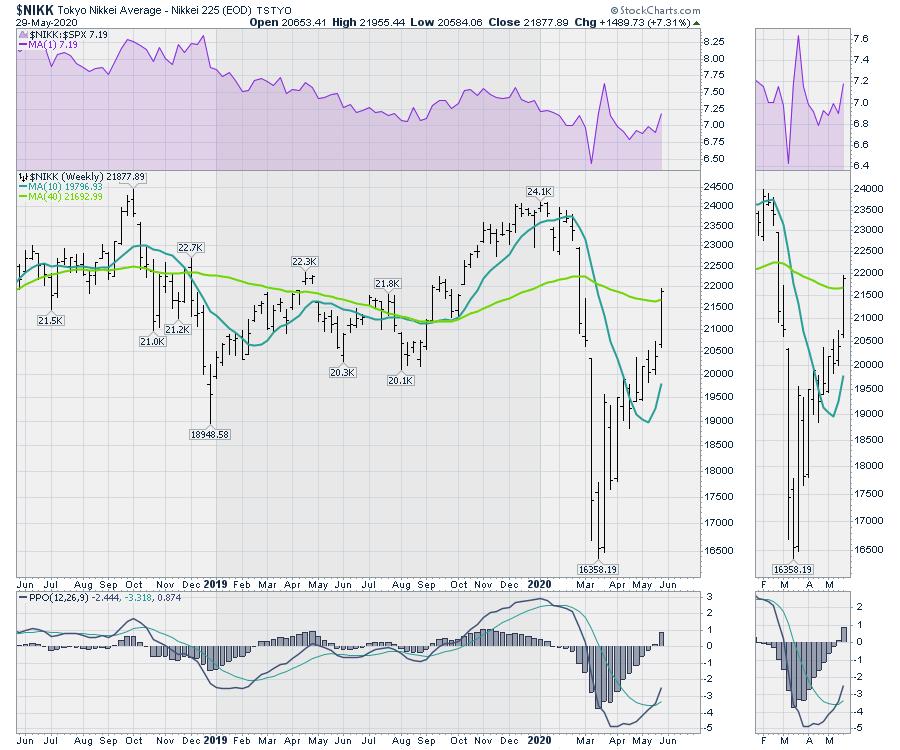 While credit rarely plays out immediately, I am reminded that Japan also has the largest debt-to-GDP. What amazes me is that this good news borrowing is on top of a Debt-to-GDP ratio over 235%. Many countries have been forced to deal with their debt at much lower levels. With plummeting GDP and the massive addition to debt, this happened overnight on Tuesday. Japan’s Nikkei rallied 1000 points following the announcement through the rest of the week to retake the 40 week-moving average. Besides owning the majority of bond and stock ETFs, there is still more they can do. 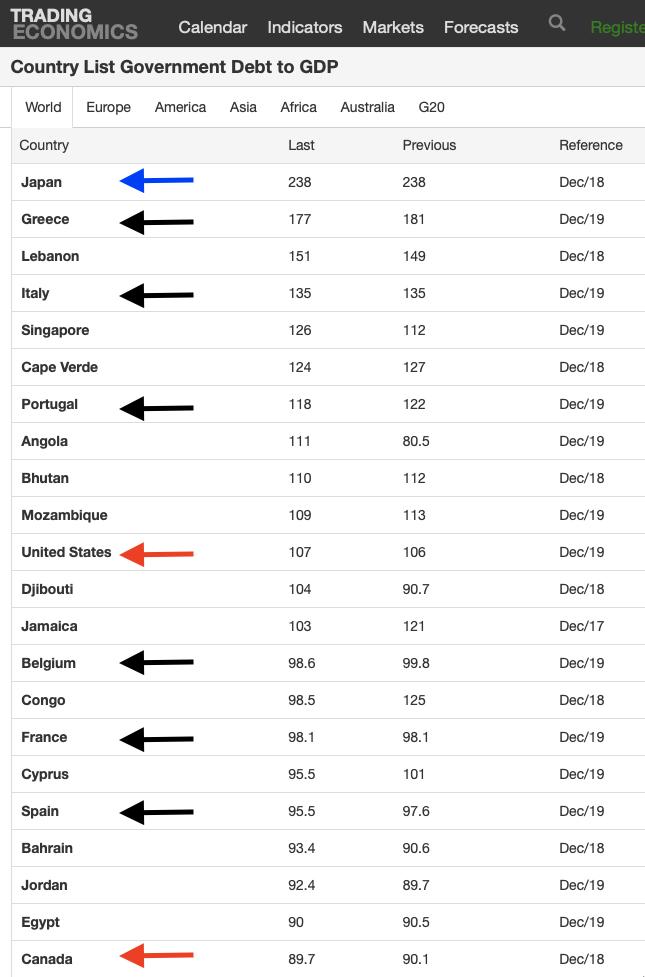 On the same evening, Europe proposed a rollout for a series of grants and loans. It was an additional $800 billion on top of previously announced funding. 6 of the top 18 nations with heavy debt are in Europe, including ones with large populations like France, Spain and Italy. It was more good news for everyone, and the European ETF ran up 5%. 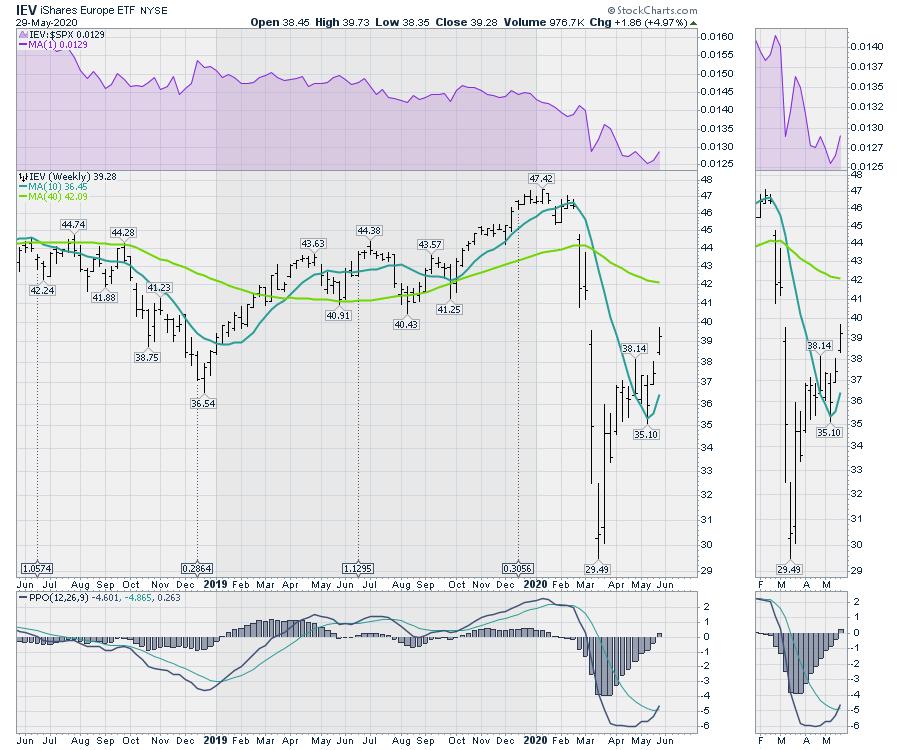 Canada’s Prime Minister has been holding a press briefing almost every day announcing new programs to help some part of society on the front step of the official residence. This week, he also suspended parliament in a democracy until September. The stock market was not outraged, up 1.87%. Canada is also on the debt list above. 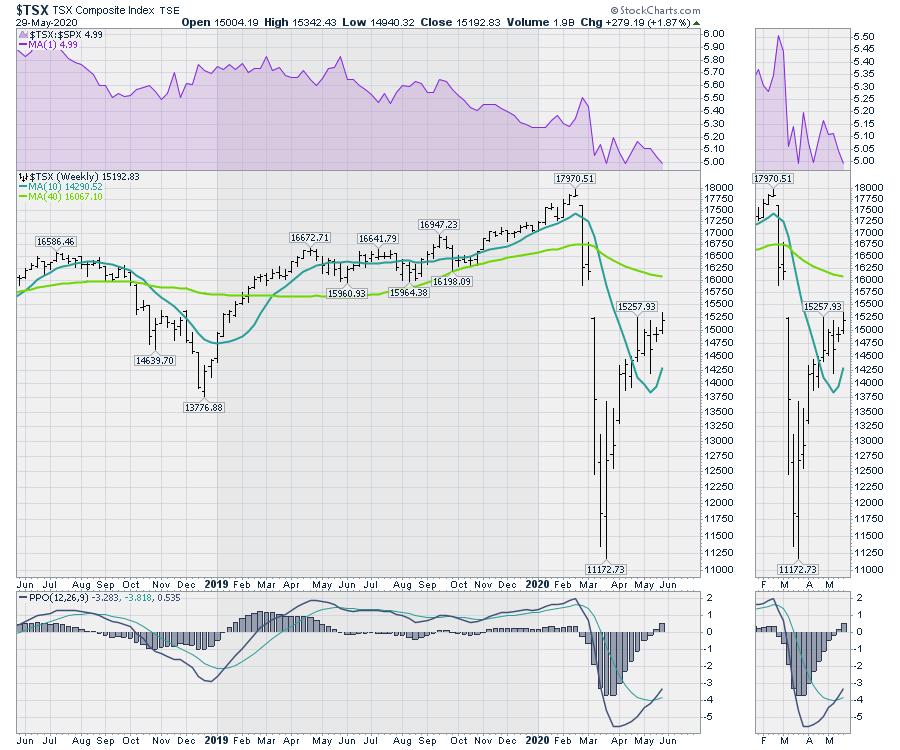 As long as there are no increased taxes, and central banks and governments worldwide continue to use debt to solve the current problems, the market is optimistic. Some of you reading this might even be surprised that all those things happened and you had not heard about them. It didn’t make the news relative to China moving troops into India, Russia moving more war planes into Syria and the threat of the removal of democratic rights from Hong Kong. Add the rising tensions of US-Sino trade and it was a week to be invested optimistically. 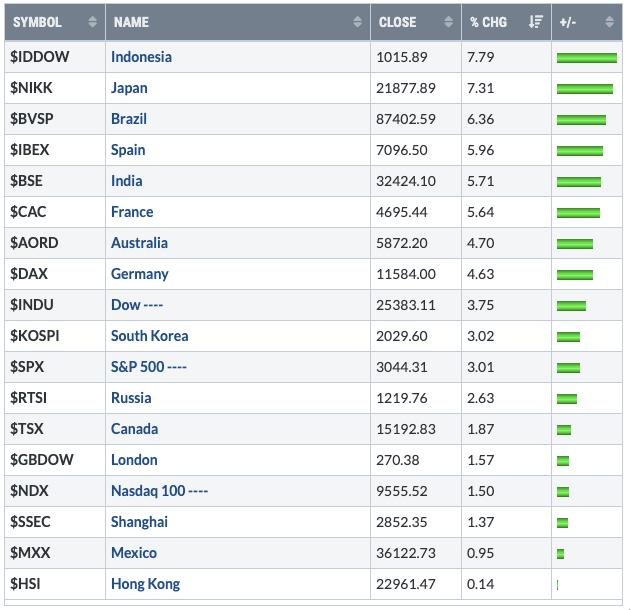 I think it is fair to say the market is not trying to reflect the economy. It is measuring risk-on vs risk-off and, right now, governments and central banks will use all the money they have to minimize civil unrest and remain in a positive light with their electorate. So the market is rising on low downside risks to owning shares due to the support being provided. 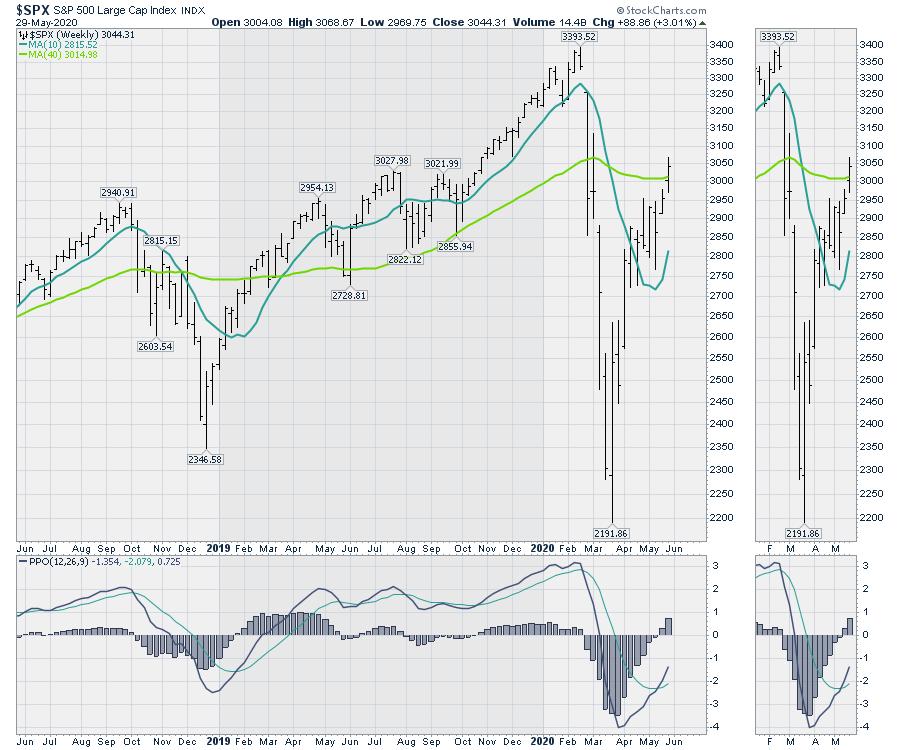 Will Japan’s debt matter at 300% or 400% or 500%? I actually thought it would, but apparently it’s all good. I don’t want to be jaded here, but debt doesn’t matter until it does. And currently it is being viewed as a party supply, not a problem. Be bullish as the charts are pointed up.