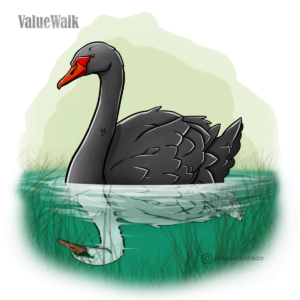 Editor’s note: This article is part of a series ValueWalk is doing on tail risk hedge funds. The series is based on several weeks of research and discussions with over a dozen experts in the field. All the content will be first available to our premium subscribers and some will be released at a later date for all readers. If you want to  see the full series and support us please click here.

Many tail-risk hedge funds posted astonishing gains during the March selloff, with at least one fund reporting a gain of over 3,000%. However, it’s important for investors to read between the lines when it comes to choosing which hedge funds to invest in.

Whenever looking at the returns of any fund, especially tail-risk funds, it’s important to make sure you’re doing an apples-to-apples comparison by using the same measurement of returns across all the funds you’re comparing.

The key is to make sure all the funds you’re comparing are using the same method for reporting returns.

Some tail-risk funds report their returns based on the current premium or initial margin. This is also referred to as return on invested premium. Reporting a return based on this number means the amount of capital that was utilized to get the return on that particular trade.

It can also mean the amount of capital that is utilized through options currently owned. Many tail-risk strategies include the use of options. This return can be in the thousands of percent typically because it’s based on a very small amount of capital. It also means the entire fund didn’t post the return that’s being reported. It’s only a small part of the fund and/ or only the part used for a particular trade.

Most hedge funds report their returns based on notional numbers, meaning it includes the entire amount of what an investor has in a fund at that time. These returns are much lower, and when you see funds reporting 10% or 20% returns, for example, this is usually what is meant. However, it can’t be compared with the 3,000% return based on the current premium because it includes the entire fund instead of only part of it.

One important difference between margin reporting and notional reporting is the fact that investors pay management fees based on notional exposure. Additionally, some tail-risk funds choose to report gains on the premium paid, but then when they have losses (which is most of the time because they serve as portfolio insurance for major selloffs to lessen the blow of the selloff for the entire portfolio), they report them based on notional exposure so they look smaller.

It’s also important to point out that many tail-risk funds that report based on current premium or initial margin may be underperforming their peers when comparing via notional numbers instead of margin numbers.

One other way some funds report is by return on assets under management or return on total invested capital. Under this method, investors fund a certain amount into their funds to cover the annual premium for the tail-risk hedge and additional cash so the mandate is fully capitalized. When the return on current premium is at or near the thousands of percent, returns on assets under management are often in the hundreds of percent.

ValueWalk contacted two tail-risk funds to inquire about how they report their returns. Universa reported a net return of 3,612% for March and 4,144% for the first quarter, according to an investor letter that was leaked to the media. If you read further in the letter, you see that the return on total invested capital was 239% for March, but that’s not the return that made news headlines.

A look at a chart that’s included in the letter illustrates how two different methods for calculating returns may have been used to come to the 3,612% return for March and the 0.4% return for the fund with a 96.67% S&P exposure combined with the 3.33% hedge: 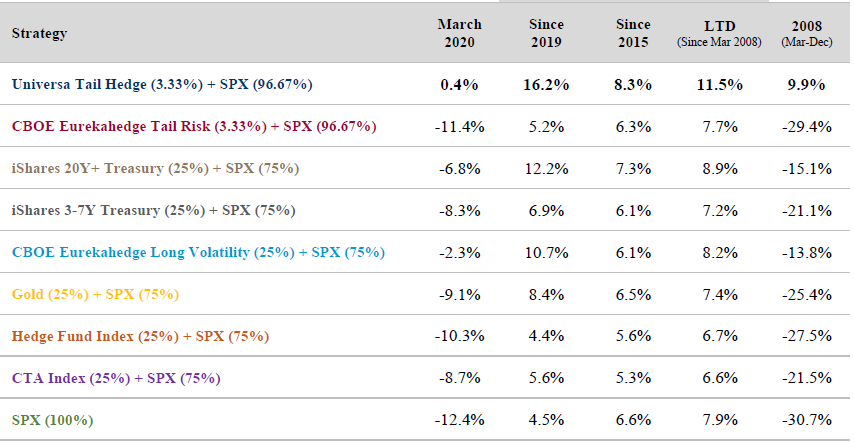 If the notional number had been used as the denominator for the 3,612% return, the example portfolio would’ve been up a lot more than 0.4%. Universa COO Brandon Yarckin sent us this quote:

“One of the things that’s unique and important about Universa’s strategy is its capital efficiency. Our strategy is extremely convex, which means we need very little capital relative to our expected crash payoff. Reporting returns on that little capital makes perfect sense, in addition to the total portfolio effect.  When there is no crash we expect to lose a portion of that capital, but life-to-date our average return on invested capital has been very high.”

LongTail Alpha’s OneTail Hedgehog Fund II posted a return on invested premium of 929%, according to a letter to investors obtained by Bloomberg. LongTail receives higher marks than Universa because its letter was much clearer on how it reports its returns, although we did not receive a response to our request for comment on this story. The fund’s letter said that including client cash held in reserve, it posted a return of 157% for March.

The different numbers illustrate just how widely return numbers can vary, depending on which method for reporting returns is used. Thus, investors should remember to ask hedge funds how they report their returns when they see an astonishingly huge percentage of return because most likely, it was the return on the invested premium or margin rather than the entire fund.

Using the same method for reporting returns across all funds being invested in is important for two reasons. First, it enables an accurate comparison of hedge fund returns. Since most hedge funds report based on notional numbers, investors don’t usually look at the return on premium.

Some managers of tail-risk funds that don’t report their returns on invested premium or margin would call the practice unethical. Importantly, it is not illegal to do so — as long as the fund does not have an LP vehicle. However, funds that do have an LP vehicle are required to report using the notional number for the denominator.

Second, using the same method for reporting returns across all funds enables investors to assess the performance of their entire portfolio accurately during times of steep selloffs like the one in March. If you aren’t using returns calculated the same way across all your funds, it’s impossible to know just how much of an impact your tail-risk fund had on your overall portfolio.

Because of tail-risk funds that report based on invested premium or initial margin, there is a call to standardize methods for reporting hedge fund returns. The Global Investment Performance Standards are a set of ethical principles used by most investment managers to fairly calculate returns.

It may be helpful to some investors to ask whether a hedge fund they are considering uses GIPS standards in reporting returns. In fact, some institutional investors will only invest in a fund if it is GIPS-complaint.

As an investor, it’s easy to be shocked into investing in a fund that reported a 3,000% return for a single month during a steep selloff. The fact is that any positive return during a period when most or all markets are selling off is a major achievement.

However, funds that report eye-popping numbers just to grab news headlines could be walking a thin line. Investors should consider whether such headlines are not giving them the full picture and whether they are doing better than their peer tail-risk funds.

The post When A 4000% Hedge Fund Return Is A Mirage appeared first on ValueWalk.