This does not include the 974,999 initial claims for Pandemic Unemployment Assistance (PUA). 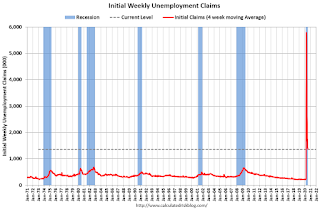 The dashed line on the graph is the current 4-week average. The four-week average of weekly unemployment claims decreased to 1,360,250.

Initial weekly claims was above the consensus forecast of 1.3 million initial claims and the previous week was revised up. 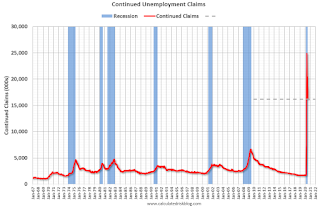 Continued claims decreased to 16,197,000 (SA) from 17,304,000 (SA) last week and will likely stay at a high level until the crisis abates. Note that continued claims are released with a one week lag, but this decline suggests further improvement in the labor market.

Note: There are an additional 13,179,880 receiving Pandemic Unemployment Assistance (PUA). This is a special program for business owners, self-employed, independent contractors or gig workers not receiving other unemployment insurance.