The market action in this week fared precisely on the anticipated lines. In the previous weekly outlook, we had mentioned the markets being firmly placed but at the same time, staying overstretched on the short-term charts. It was also mentioned in the previous note that any up moves will face stiff resistance at higher levels. Keeping in line with this analysis, NIFTY found itself resisting to the 12000-levels through the week. The index ended up finding very strong resistance near this point and saw sharp corrective move from that level. Despite a technical pullback on Friday, the headline index ended the week with a net loss of 151.75 points (-1.27%) on a weekly basis. 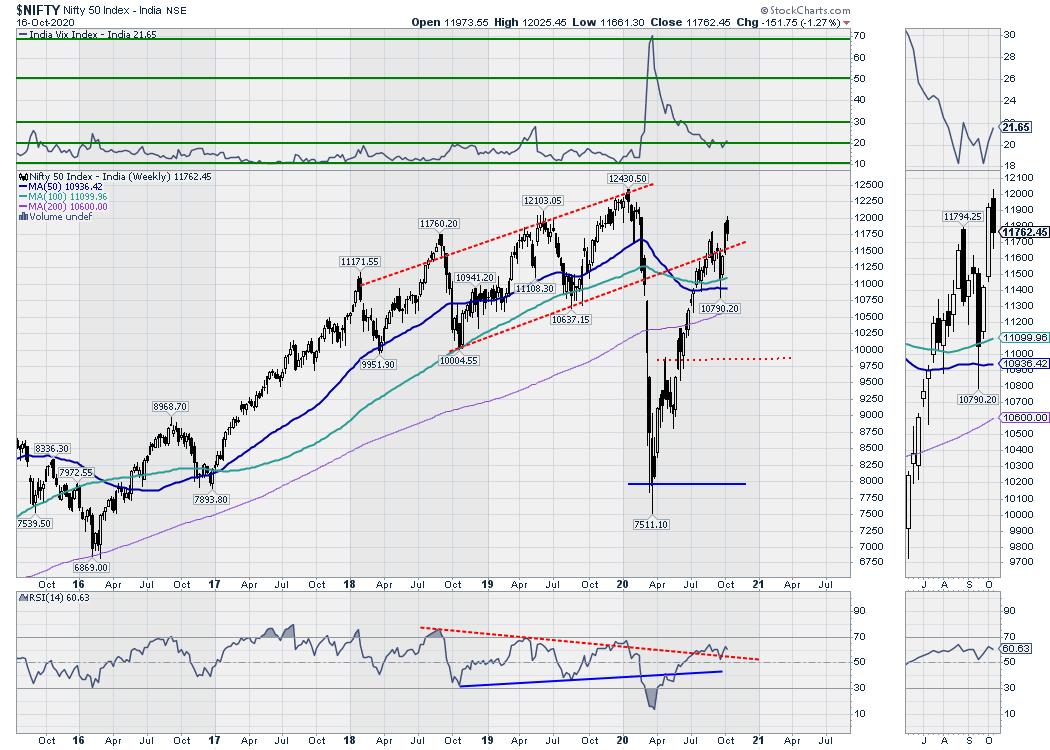 From the technical perspective, the NIFTY’s finding constant resistance near the 12000-levels and the subsequent corrective move is an important technical development. This has made this level an intermediate top for the markets in the near term. This has also pushed the markets in a broad consolidation range with the zone of 10936-11099 acting as one of the most important pattern-supports for the markets. This zone is made up of 50-Week MA which stands at 10936 and 100-Week MA which stands at 11099. The volatility, which had spiked 11.06% a week before this one, surged another 6.21% to 21.65.

The start to the week is likely to say jittery this time. The levels of 11880 and 11950 will act as resistance points. The supports will come in at 11600 and 11510 levels. The trading range in the coming week is likely to stay higher than usual given the current technical setup on the charts.

The weekly RSI is 60.63; it stays neutral and does not show any divergence against the price. The weekly MACD is bullish; it trades above the signal line. A black body occurred on the candles. This body of the present candle has not extended itself near the half-way point of the previous week’s candle, it did not create a classic “Dark Cloud Cover” which could have been created. However, it reflects the bearish undertone of the week.

The pattern analysis reflects the index inside the channel again. This channel was violated when the NIFTY broke down from that channel. Now with NIFTY inside that channel again, ideally speaking, the lower trend line of that channel should play out as supports in the near term.

Overall, the markets have formed an intermediate top near 12000 levels and the markets will find it difficult to move past this level too soon. The current moves in the markets have pushed the markets in a broad consolidation range with the zone of 50- and 100-Week MA becoming major supports for it going ahead. We cannot rule out intermittent technical pullbacks, but all moves on the upside may see profit taking bouts at higher levels.

There are possibilities of some tactical shift happening in the sectors as well in the weeks to come. We recommend keeping purchases less aggressive, and it would be rewarding to stick to defensives and staying highly stock-specific while making purchases. 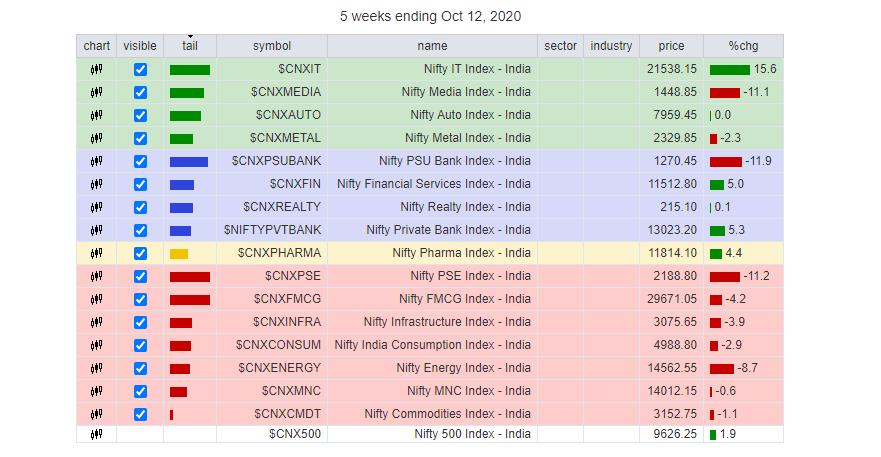 The review of Relative Rotation Graphs (RRG) shows that despite the start of relatively outperformance in the financial stocks, the PSU banks are yet to show any good performance have not improved on their relative momentum just as yet.

NIFTY Auto, IT, Media and Metal indices stay in the leading quadrant. However, expect for IT and Media packs, the Metal and Auto are seen sharply paring on their relative momentum. These groups may post relative outperformance against the broader markets, the Metals and Auto packs may contribute less as compared to the IT and Media groups.

NIFTY Pharma is in the weakening quadrant. After an improvement on the momentum, it appears to be taking a breather and moving towards lagging quadrant.