The NIFTY continued its surge for the third week in a row as it extended its gains. In the previous weekly note, we had mentioned the possibilities of the mild extension of the up move. In the week that went by, the NIFTY saw itself oscillating in a slightly expanded range. The trading range for the Index remained around 400-odd points and in the process, it also moved past some key levels in the process. After moves that remained in a defined and measured range, the headline index ended with a net gain of 22.35 points (+2.16%). 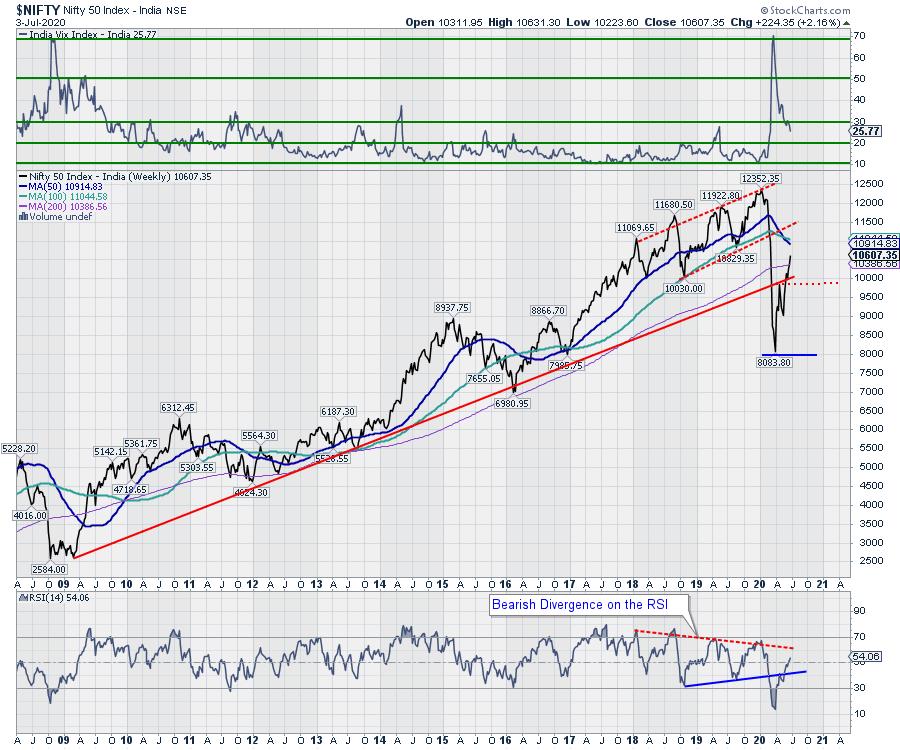 Despite an evident disconnect with the macro-economic landscape, the equity markets around the globe are being fueled by massive liquidity gush and this has resulted in a giant short squeeze amid a risk-on setup. The volatility continued its consistent decline; the India Volatility Index, INDIAVIX, declined by another 10.33% to 25.77. The earlier week had seen the INDIAVIX coming off by over 4%. As of today, the NIFTY rests at a point which is the confluence area of one of its two strong pattern resistance points.

With the US Markets shut on Friday, the start of the week will be devoid of any global cues. The coming week is expected to see the levels of 10645 and 10775 as probable resistance points. The supports come in much lower at 10465 and 10330. In event of any corrective activity or retracement, the range on the lower side is expected to get wider.

The weekly RSI stands at 54.06; it has marked a fresh 14-period high, which is bullish. The RSI, however, continues to remain neutral and does not show any divergence against the price. The daily MACD is bullish as it trades above its signal line. A white body emerged on the candles; apart from tis, no other significant formations were observed.

The pattern analysis shows that the NIFTY as managed to move past the 200-DMA which presently stands at 10386. The index has also crawled above the decade old rising trend line which it had violated on its way down. This zone may act as a temporary support in the event of any retracement or any corrective move.

All and all, the markets are continuing to mark extended up move, and in the event of this happening over the coming week as well, we recommend not chasing the up moves blindly. On the short-term daily charts, the NIFTY is at confluence of two resistance points and showing signs of diminishing momentum. However, the liquidity driven markets make downsides extremely resilient. In the present technical setup, we strongly recommend avoiding any major exposure and adopt a highly selective and stock-specific approach towards the markets.

The review of Relative Rotation Graphs (RRG) shows that the sectors have continued to advance and rotate on the expected lines without any deviation in their respective trajectories. The Auto index has crawled in the leading quadrant which advancing its trajectory from the improving quadrant. This is now set to relatively outperform the broader NIFTY 500 Index. Along with the Auto, the Infrastructure, Energy and Commodity groups are also in the leading quadrant, but they appear to be faltering on their relative momentum.