After testing a couple of important levels in the week before this one, the NIFTY took a breather and consolidated over the past five sessions. In the previous weekly note, we had highlighted that the momentum at higher levels is diminishing, which might lead to some consolidation at higher levels. The markets spent the entire week in a limited range while oscillating in a 320-point range. While showing no intent of making any strong moves on the upside, the Index also did not show any signs of major weakness. The range-bound consolidation saw the headline index ending with a net loss of 120.70 points (-1.08%) on a weekly note. 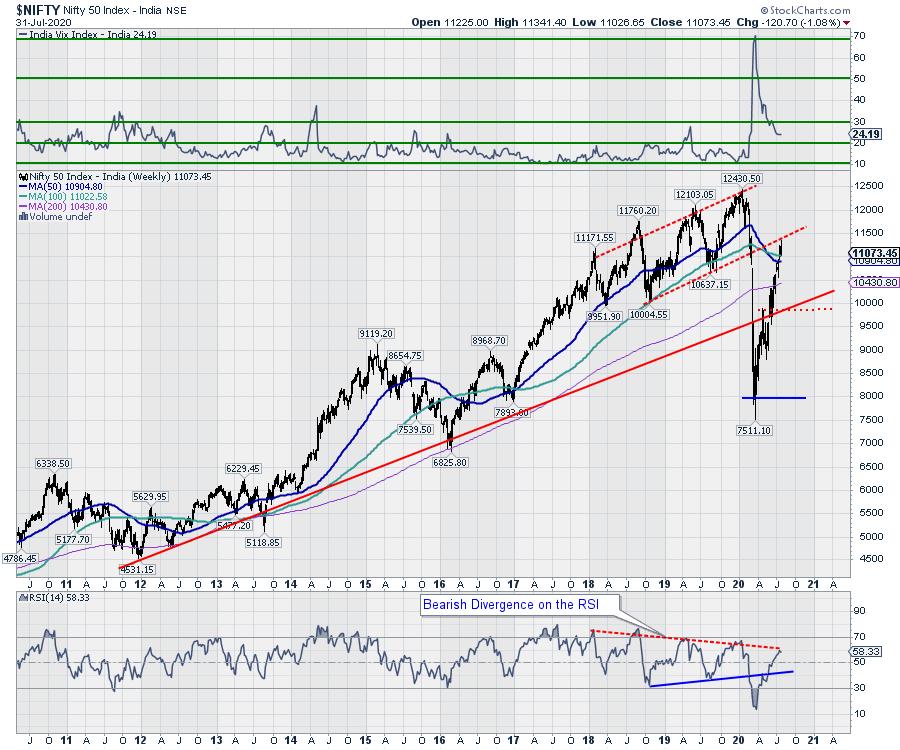 The markets have shown sustained up moves after moving past the 200-week MA, which presently stands at 10430. Having said this, it currently trades above the 50- and 100-week MAs as well, but it is now showing signs of some impending consolidation at higher levels. More importantly, the global risk-on environment is now showing some signs of cooling off as well. The volatility remained on the lower side as the India Volatility Index, INDIAVIX, declined by 1.40% to 24.19 on a weekly basis.

Monday is likely to see a quiet start to the trade. The levels of 11351 and 11500 will act as strong resistance points at higher levels. The supports will come in at the 11000 and 11860 levels. We expect the trading range to get wider this week and also expect volatility to increase moderately.

The Relative Strength Index (RSI) on the weekly chart is 58.33; it remains neutral and does not show any divergence against the price. The weekly MACD is bullish as it trades above the signal line. Apart from a black body that emerged, no other formations were noticed.

Importantly, the global risk-on environment that was firmly in place for over two months is seen taking a breather and cooling off. This does not mean that equities will see a major downside, but this certainly paves some way for measured consolidation. This is also evidenced by the less risky assets, like Gold and Debt instruments, experiencing improvement in their relative performances. However, despite this, we will continue to see equities relatively outperforming the other asset classes, though some possibility of mild corrective moves cannot be ruled out.

We reiterate the need to refrain from aggressive longs unless the NIFTY takes out 11300-11350 levels on a closing basis. Until this happens, we will find the index vulnerable at higher levels. A highly focused and stock-specific approach is advised for the day.

Sector Analysis for the Coming Week 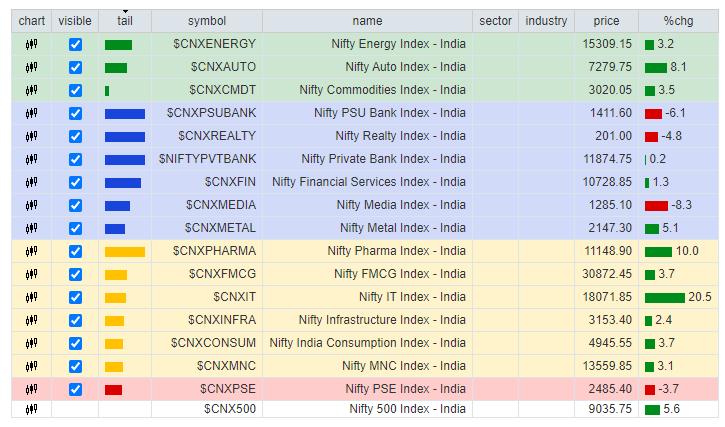 The review of Relative Rotation Graphs (RRG) shows there is no significant change in the placement of the sectors as compared to the previous week.

The baton for outperformance, as of this day, remains in the hands of financial and banking stocks. The BankNifty, PSU Banks and the Financial Services groups are inside the improving quadrant and rotating north-easterly, while maintaining their relative momentum against the broader markets along with the Realty Index. The Media Index appears to have a strong negative rotation as it moves down, paring its relative momentum while remaining in the improving quadrant.

Important Note: RRG™ charts show the relative strength and momentum for a group of stocks. In the above chart, they show relative performance against NIFTY500 Index (Broader Markets) and should not be used directly as buy or sell signals.