The week before this one had seen the headline Index testing a couple of important levels on daily and weekly time frame charts. On the daily chart, the Index had closed a notch above the 200-DMA; on the weekly chart, it had tested the 50-Week MA. Over the past five session, the markets displayed a generally buoyant intent and went on to move past a few another important levels as well. In a session wherein the NIFTY oscillated in a less than 300-point range, it went on toe surge higher and ended with gain of 292.45 points (+2.68%) on a weekly note. 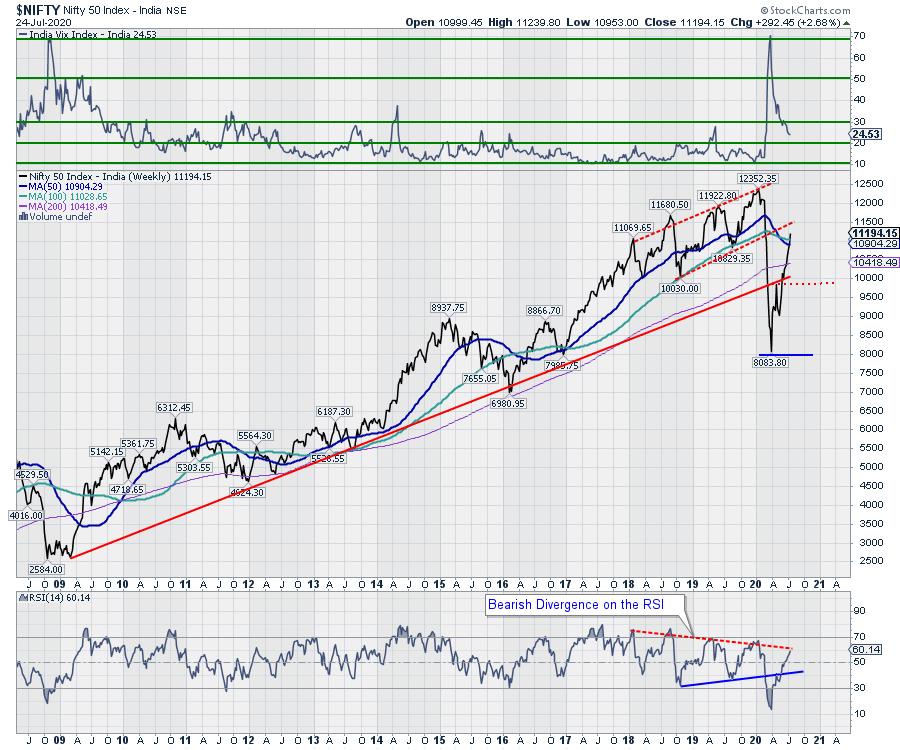 During the past five sessions, as of week ending Friday, July 24th, the Index has not only moved well past the 200-DMA which is presently at 10862, it has also moved past the 50- and 100-Week MA which stand at 10904 and 11028 respectively. Although this is now happened with tapered momentum at higher levels, the markets have not shown signs of any major weakness. The India Volatility Index, INDIAVIX, rose marginally by 1.56% to 24.53 on a weekly basis.

The weekly RSI is 60.14; it has marked a fresh 14-period high which is bullish. The RSI is neutral, and it does not show any divergence against the price. The weekly MACD is bullish as it trades above its signal line. A rising window occurred on the candles; this generally implies continuation of the upward trend. However, this would require confirmation on the next weekly bar.

The pattern analysis shows that the NIFTY has now not only moved inside the decade-old trend line that it had violated in the month of March, it also now trades above all its key weekly moving averages. While doing so, the index has shifted its support levels higher,

Over the coming week, since the NIFTY has been able to keep its head above the 10900 levels, it may attempt to move higher incrementally. Only in the event of the index slipping below 10900, we may see some higher degree of weakness creeping in. There are higher chances of the markets facing a slightly wide ranged consolidation as no signs of any major weakness are seen. However, despite this technical setup, we cannot ignore the overstretched nature of the markets. Because of this, the volatility rising and markets getting vulnerable at higher levels or it experiencing sharp profit taking bouts cannot be ruled out. We recommend chasing the momentum in a highly stock-specific manner while guarding profits at higher levels. 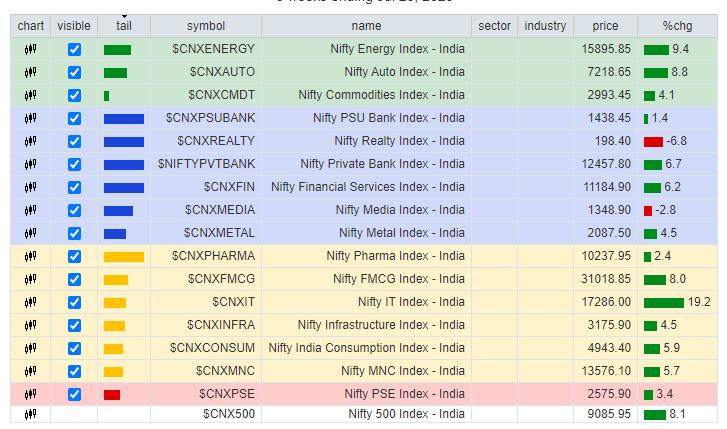 The review of Relative Rotation Graphs (RRG) shows that two sectors appear giving up momentum mid-way, one sector is seen taking a U-turn towards the leading quadrant.

NIFTY Auto remains in the leading quadrant, but its momentum appears to be tapering up. The sector may relatively outperform the broader NIFTY 500 Index, but its momentum may slow down. The sectors like Nifty Energy and Commodities which are in the leading quadrant are seen vertically giving up on their momentum. They may not outperform the broader markets.

Apart from this, the Media and Metal packs are seen taking a breather while staying in the improving quadrant. Any relative outperformance in these groups may stay highly stock specific. Realty, PSUBANKS, BankNifty, Services and Financial Services pack are not only in the improving quadrant, but also seen advancing firmly while maintaining their relative momentum. These groups may pose resilient performance over the coming days.

IT sector, which is currently in the weakening quadrant is seen making a U-turn towards the leading quadrant.

NIFTY Consumption, FMCG, Pharma, Infrastructure and PSE groups are placed in the weakening and lagging quadrants. They are rotating negatively and may relatively underperform the broader markets.