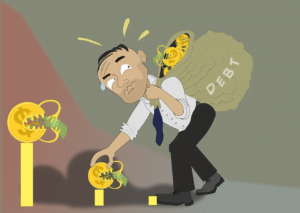 Following the 2008 financial crisis, several corporations prioritized reducing their debt and strengthening their balance sheet. But the record low interest rates prompted dozens of companies to borrow more than they needed. Heck, many of them were borrowing to buy back their own stock and inflate their share prices. When the coronavirus pandemic brought the economic activity to a halt, some of these companies were begging the government for a bailout package. Here we take a look at the top 10 biggest corporate borrowers in the world.

The ranking is based on data from the Global Finance magazine. It doesn’t include borrowers in the financial services sector. Borrowing is not a bad thing, but excessive borrowing is. Corporations typically borrow to expand and diversify their businesses, and fund mergers and acquisitions. But if you are borrowing money just because it’s available at ridiculously low interest rates, it is eventually going to catch up.

Some companies on this list have a strong balance sheet. They can easily pay off their debts. Others are just falling from grace or have already fallen. Below are the ten biggest corporate borrowers in the world. The Global Finance magazine has ranked them based on their long-term debt.

Headquartered in Shenzhen, Evergrande is China’s second largest real estate developer. It’s one of the world’s most valuable real estate brands. The Evergrande Group’s stock price skyrocketed in 2017, making its founder Hui Ka Yan one of China’s richest people. The property developer has borrowed aggressively to acquire land across more than 200 cities in China. In the last couple of years, Evergrande investors have started questioning the company’s ability to repay its debts.

General Electric is the ninth most indebted company in the world. Its long-term outstanding debt stands at $91 billion, according to the Global Finance magazine. By comparison, its annual revenue is $95 billion. Much of its debt burden is from the GE Capital era. Last year, GE sold its biopharmaceuticals business to Danaher for $21.4 billion to help reduce its debt.

Apple has a cash reserve of around $205 billion and its revenue last year was $267 billion. The iPhone maker is fully capable of paying off its debt easily. Apple has been borrowing to finance stock buybacks and dividends. The company’s long-term debt burden stands at $92 billion. Last year, it sold $7 billion worth of 30-year bonds at just 3.0% interest rate.

Back in 2013, Verizon sold a record $49 billion worth of bonds to finance its $130 billion acquisition of Vodafone’s 45% stake in Verizon Wireless. The telecom giant has been trying to reduce its debt since the deal. Verizon aims to regain a single-A credit rating. It could take the New York company another few years to shore up its balance sheet because it is also investing heavily in building a 5G network infrastructure.

Ford is facing fierce competition in the automobile industry. It’s struggling to reduce its massive long-term debt pile of $101 billion. Its credit ratings are below investment grade. But the automaker continues to pay handsome dividend to its investors. According to S&P Global, Ford is among automakers with “the highest one-year probability of default” amid the COVID-19 pandemic.

The Belgian brewing giant is the fifth biggest borrower in the world. AB InBev has been aggressively buying various brands all over the world. In 2016, it purchased the rival SABMiller for $100 billion. The company controls 25% of the world’s beer market. Facing pressure from credit rating agencies and investors, AB InBev last year cut its dividend in half to help reduce the debt burden.

Over the last couple of decades, the cable TV company has been on an acquisition spree. And it has financed its acquisitions largely through debt. Last year, it acquired British broadcaster Sky for $39 billion. Comcast purchased DreamWorks Animation in 2016, NBCUniversal in 2011, United Artists in 2005, and AT&T Broadband’s assets in 2002. The company has been cutting its operating costs to prioritize debt reduction. But it’s facing fierce competition from streaming services such as Netflix.

Petróleos Mexicanos, better known as Pemex, is a state-run Mexican petroleum company. According to Global Finance, its long-term debt burden is $106 billion, making it the most indebted oil company on the planet. The Mexican government has tried to reduce its outstanding debt balance, but falling oil prices have made things worse for Pemex.

SoftBank boss Masayoshi Son recently likened himself to Jesus Christ. The Japanese technology conglomerate has borrowed over a hundred billion dollars to invest in startups like WeWork, Uber, and Oyo Rooms at exorbitant valuations. SoftBank’s ambitious Vision Fund has also incurred steep losses. We’ve done a nice roundup of some of SoftBank’s worst investments. You can check it out here.

With its long-term debt totaling $151 billion, AT&T has topped the list of the world’s biggest corporate borrowers. The Dallas-based telecom giant purchased DirecTV for $67 billion in 2015 and Time Warner for $108 billion in 2018. The mega-acquisitions left AT&T with a staggering $180 billion debt. Since last year, the company has made debt reduction its top priority.

The post Top 10 biggest corporate borrowers in the world appeared first on ValueWalk.