In early October, market trends appeared to make sense — at least, as much as could be expected in 2022. The S&P 500 had just made a new 52-week low, the US Dollar had just achieved a new 52-week high, and the Ten Year Treasury Yield had just reached its highest level since 2008.

And then everything changed.

Over the last six weeks, equities have rallied, with the S&P 500 testing its 200-day moving average from below. The US Dollar has rotated lower, closing below its own 200-day moving average this week for the first time since June 2021. Interest rates have moved significantly lower, with the Ten Year now 75 bps lower than its October peak of around 4.25%.

This mean reversion move has left many investors scrambling to determine how to play the remainder of 2022. Will stocks follow their traditional path of strength in December, known as the strongest month for equities? Or will the S&P 500 and Nasdaq buck that trend and show weakness, indicating that the November rally was overly excessive?

If you connect the major peaks in 2022 — the ones in January, March and August — you’ll see that it lines up almost perfectly with this week’s high. This key trendline currently lies right around 4100, which represents the final clear level of resistance around current levels. If and when the S&P 500 breaks above this trendline, a move to the August high around 4300 would be the next logical step. This 4300 level, coincidentally, represents a 61.8% retracement of the January to October selloff.

Next, we have the US Dollar. 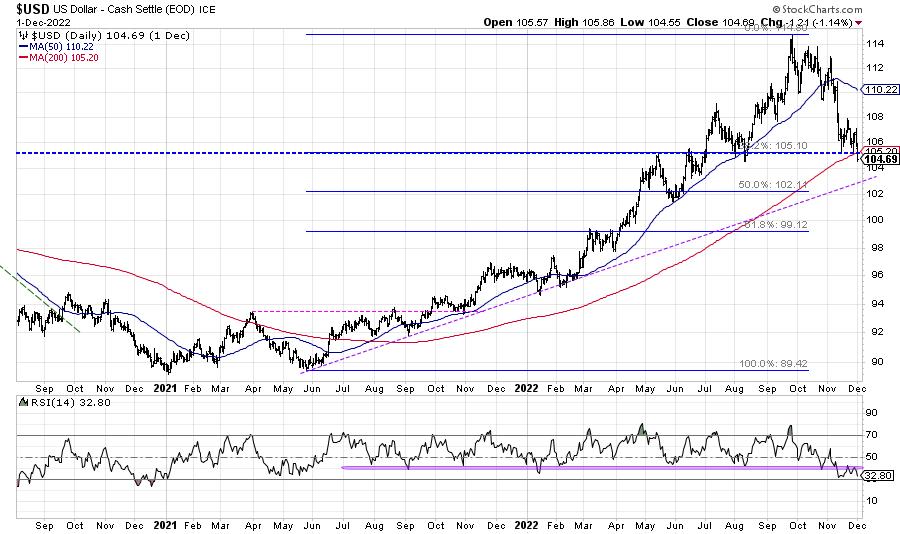 The US Dollar index has dropped from a peak just above 114 to end this week around 104. Here, we have a horizontal trendline (blue dashed line) which is a 38.2% retracement of the 2021-2022 uptrend. This trendline also lines up with the swing lows in August and November, as well as the 200-day moving average.

One of the major themes of 2022 has been the strength in the US Dollar, which we have often called the “wrecking ball for risk assets”. The recent weakness in $USD has allowed stocks, bonds, and commodities to all move higher over the last six weeks.

If you’re bullish on stocks here, I’d be cheering for the US Dollar to move even lower. A trendline from the 2021 and 2022 lows may be a good downside objective, currently around 103.

Finally, we can look at India. 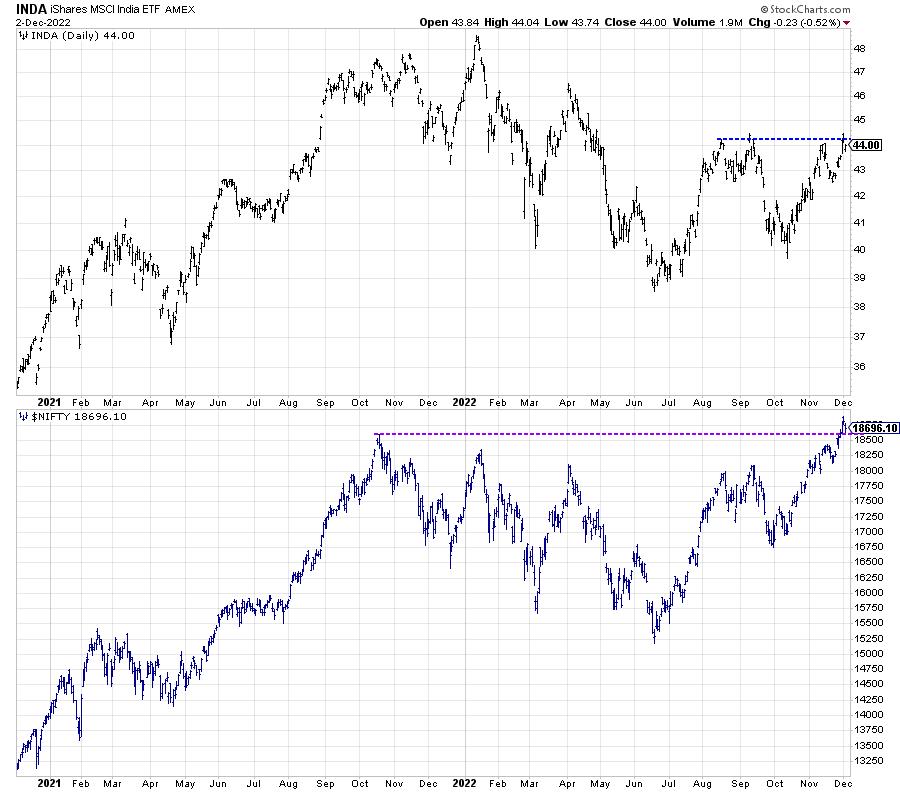 When I traveled to Mumbai last month, I spent a good deal of time reviewing charts in local currency, including the NIFTY 50 and the Sensex. These indexes broke to new 52-week highs this week, as the Indian market has shown renewed strength. But the US-listed ETF to play India, INDA, is about 10% below its own 52-week high. What’s the reason for such a difference in the two charts? That’s the impact of the US Dollar.

The strength in $USD through most of 2022 has meant that, for American investors, going outside the US stock market has been unfavorable as any strength in the local market would be deteriorated by the currency differential. The recent drop in the Dollar has completely flipped that narrative. While INDA is still well off its January high, the price is testing resistance just above $44 which, if broken, would complete a head-and-shoulders continuation pattern.

I’ll be watching these trendlines for INDA (blue) and $NIFTY (purple) to see if these resistance levels can be broken and held.

Trendlines can provide an effective way to define trends, to follow their progress, and then identify when the trends have shifted. Those are three of the many trendlines I’ll be following next week, to determine whether December continues the risk-on phase the markets have experienced since October.

Want to see a deeper dive into today’s first chart on the S&P 500? Just head over to my YouTube channel.

P.S. Ready to upgrade your investment process? Check out my YouTube channel!

The author does not have a position in mentioned securities at the time of publication.   Any opinions expressed herein are solely those of the author, and do not in any way represent the views or opinions of any other person or entity.