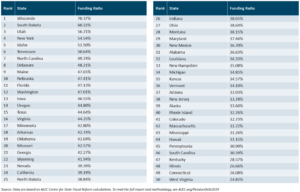 Unfunded public pension liabilities for states amount to $4.9 trillion or $15,080 per person in the U.S., according to the American Legislative Exchange Council (ALEC). The organization said in a report this week that the situation has improved somewhat, but the steep uphill climb continues.

ALEC said improvements in reporting pension data have improved so it could collect data from the same fiscal year for all 50 states instead of using data from more than one state. The organization used numbers from fiscal 2018.

It also said some states have improved their unfunded public pension liabilities. Many states are benefitting from a transition to hybrid pension plans that combine the features of defined-benefit and defined-contribution plans.

Finally, market returns have been strong for pension fund portfolio, also increasing the value of the assets they hold.

Despite all these positive trends in public pension funds, chronic underfunding remains a serious problem for unfunded public pension liabilities. ALEC notes that most states structure their plans as defined-benefit plans, which means employees receive a fixed payout at retirement based on their final average salary, the number of years they worked and a benefit multiplier.

Pensions normally build assets through employee contributions and tax revenue, but some plans still pay those obligations by issuing bonds, which kicks the can further down the road and makes it an issue for future years without fixing the real problem.

Most states can’t avoid their pension obligations, although some reforms can keep unfunded public pension liabilities from continuing to increase. For example, switching to a defined-contribution plan similar to a 401(k) can enable states to keep them from going while providing public workers more flexibility in making their retirement contributions. It can also enable employees to transfer their retirement savings to a new employer. 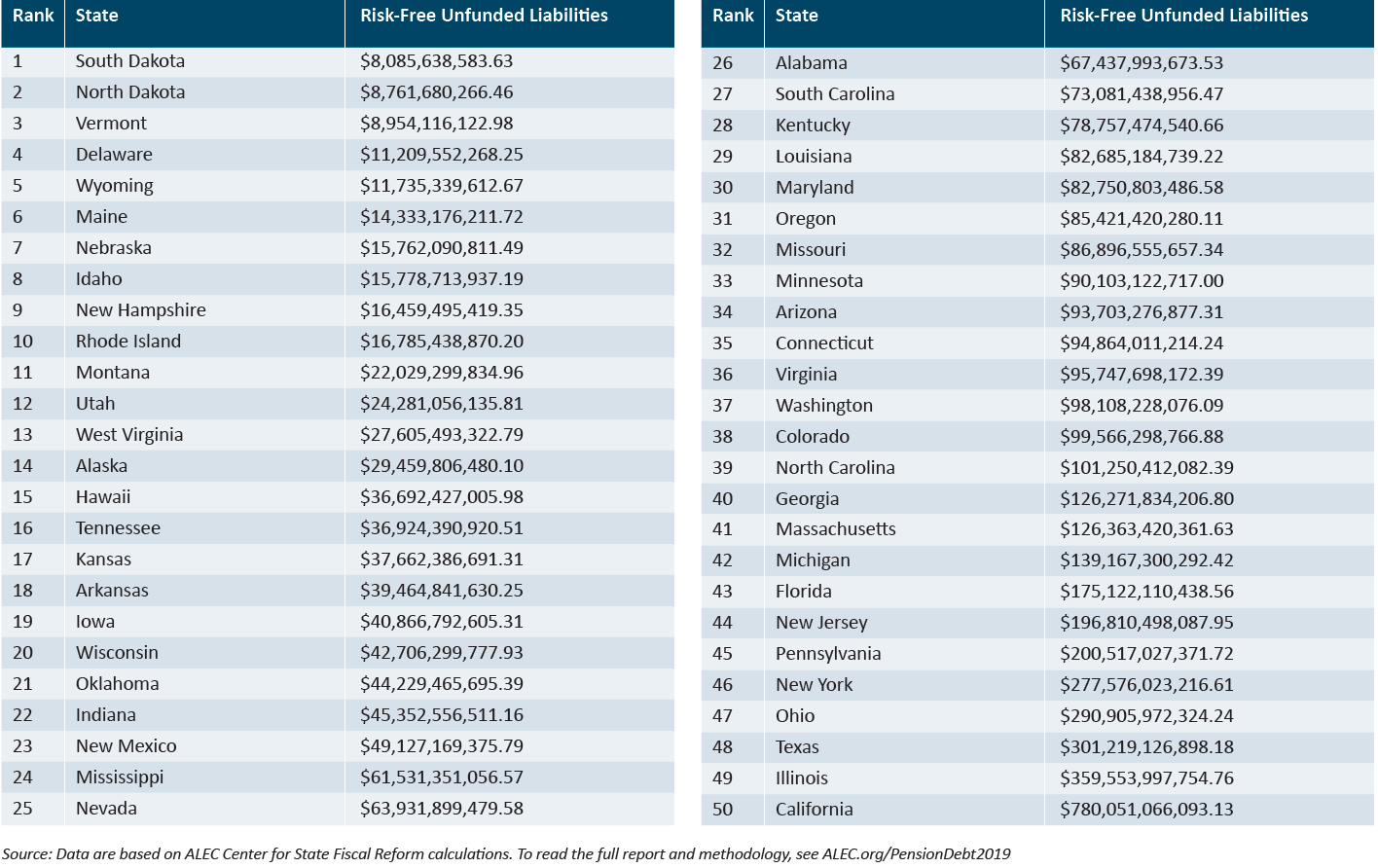 On a per capita basis, Alaska is the state with the highest unfunded pension liabilities at nearly $40. Tennessee is in the best shape at less than $5,500. 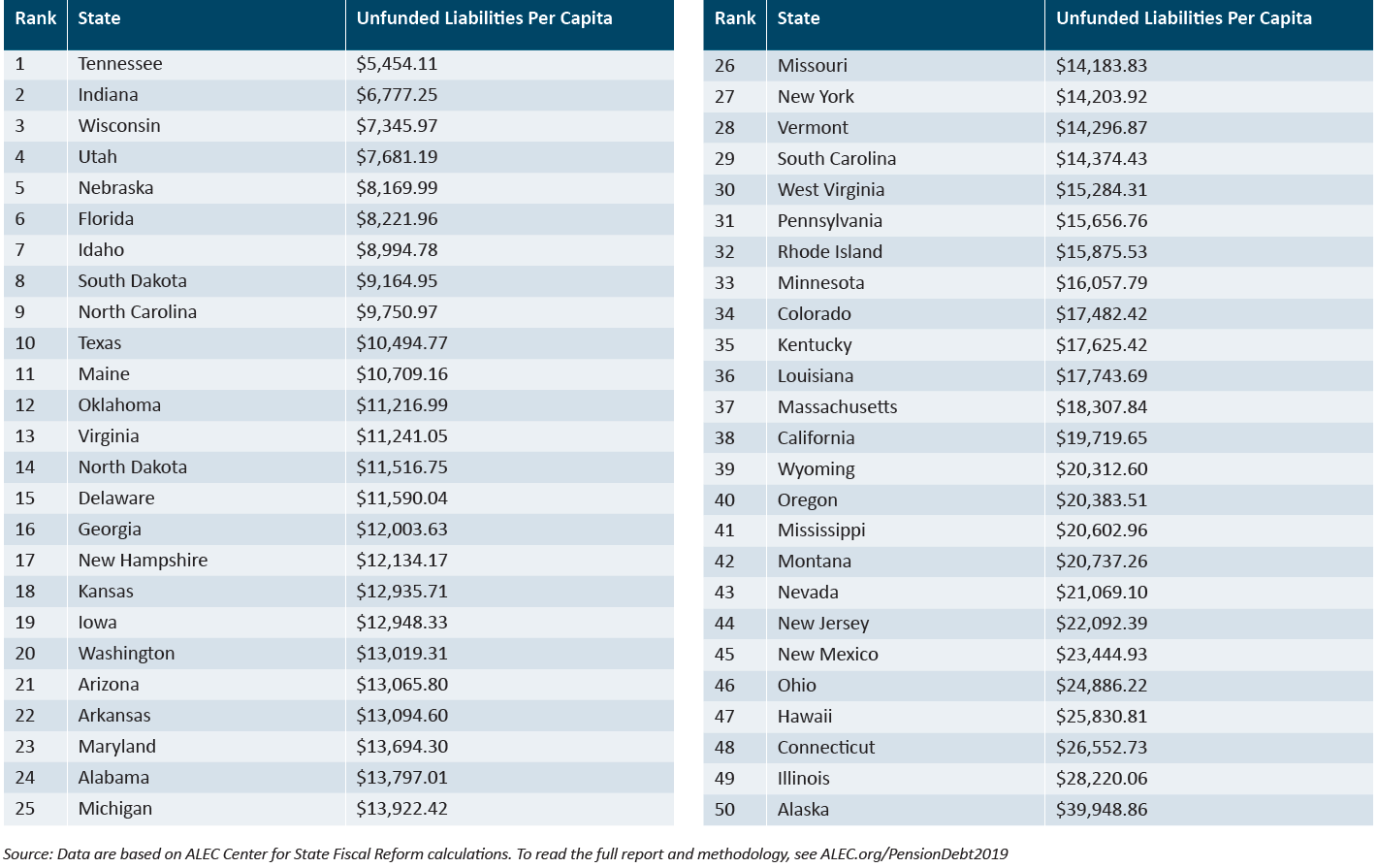 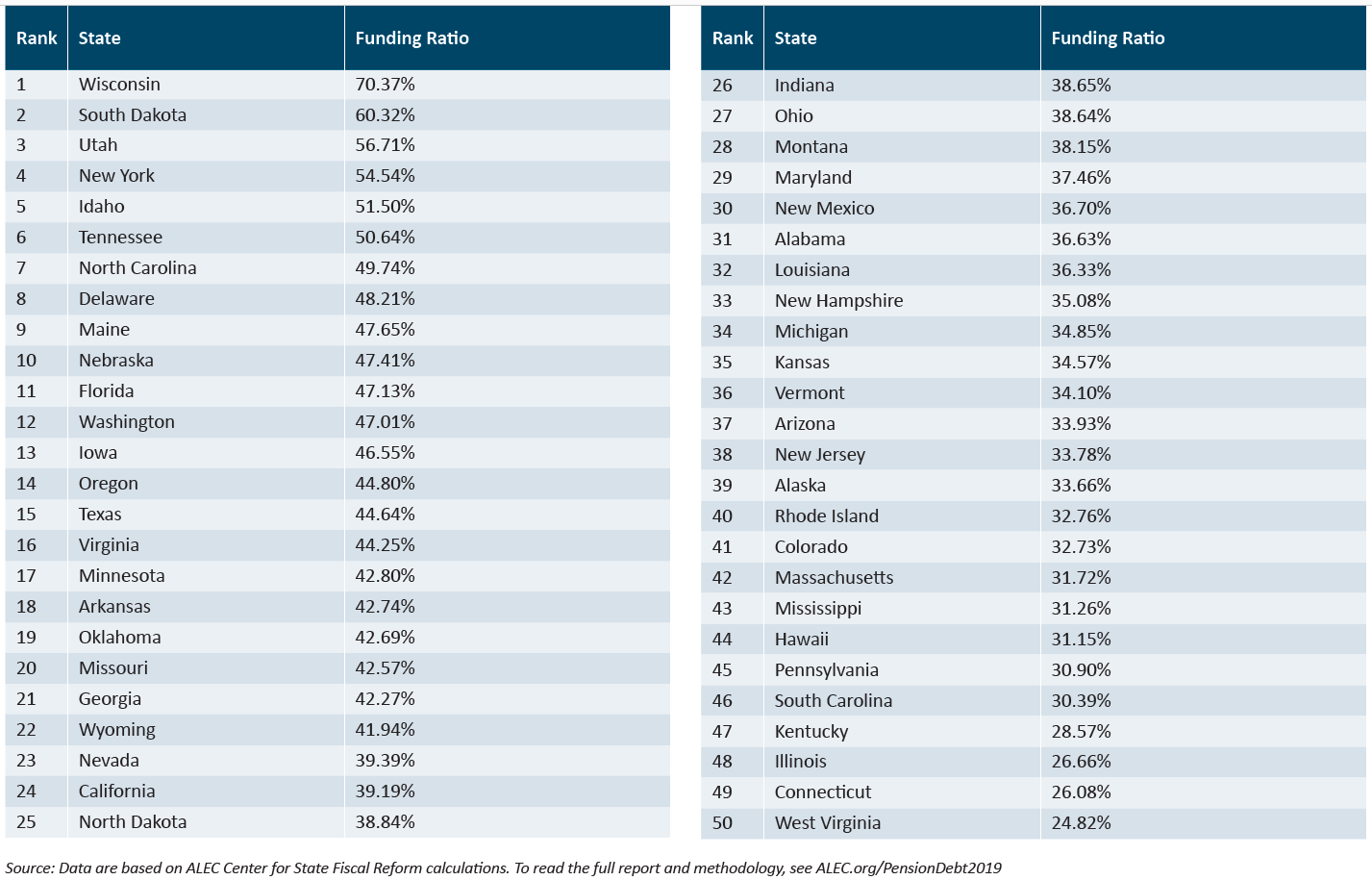 Utah has seen the greatest improvement in its funding ratio at 40.55% between 2012 and 2018. West Virginia’s situation has gotten worse with a -25.02% change. Several other states have also seen their funding ratios worsen, including Vermont, South Carolina, Pennsylvania and North Carolina.

ALEC notes that unfunded public pension liabilities have exerted significant pressure on their state governments, and this pressure is becoming clearer as financial reporting improves.

For example, Governmental Accounting Standards Board statements 67 and 68 went into effect in fiscal 2014 and fiscal 2015, respectively. Statement 67 requires plan assets to be valued every year so pension trustees can’t engage in asset smoothing. Smoothing averages assets over five years to smooth out any swings in market performance. While smoothing does even out investment swings and makes annual contributions more predictable, it also hides the volatility of pension asset portfolios.

Asset smoothing can continue under statement 68, however. Governments can defer the recognition of the difference between the expected and actual returns on plan assets. This defers the inflow of resources over five years, having a similar effect as asset smoothing.

ALEC adds that better reporting and more accurate estimates of state obligations have made the actual value of unfunded public pension liabilities clearer.

The organization notes that last year’s report was based on data from fiscal 2015 through 2017. It showed that unfunded public pension liabilities amounted to $5.9 trillion, which means this year marks an improvement overall.

However, ALEC says it’s too early to celebrate this as a win because the root causes of the problem have still not been addressed. The improvements came from other changes, which means the problem will continue to grow until the root causes are handled. This is especially true during years with low investment returns.

One other concern for unfunded public pension liabilities is the reality that often, the real investment rate of return is worse than the assumed rate. For example, ALEC said that in fiscal 2018, the average return on pension investments was 6.05%, while the average assumed return was 7.22%. States continue to come up short on their return assumptions, which is just exacerbating a situation that’s already bad.

The post These states have the most unfunded public pension liabilities appeared first on ValueWalk.