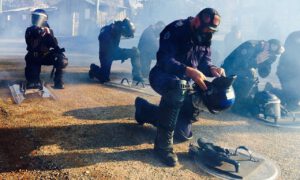 Riots Devastate (Often Black) Victims, But They Can Fight Back; Class Action Civil Law Suits Can Help Them, and Help Deter Criminals

WASHINGTON, D.C. (June 2, 2020) – Criminal riots continue to proliferate, despite increase law enforcement presence, curfews, and pious pronouncements, and many of the victims of this criminal conduct are members of minority groups whose places of business – often uninsured – were damaged or even destroyed.

But just because government has so far proven ineffective in protecting them, they are not without some remedy, notes public interest law professor John Banzhaf, who is known for advocating and using legal action as a tool for fighting wrongdoing and achieving social justice.

Unlawful destructive criminal riots in many cities have resulted in major incidents of arson, widespread looting, destructive vandalism, other damage to property 0including the property of African Americans and other minorities – but police, the national guard, arrests (which have been few and far between), the threat of criminal fines, and pleas for calm and order from many have failed to deter those bent on engaging in criminal activity to make their point.

But there is a remedy for criminal riots which could be helpful in this and other similar situations of unlawful – and especially felonious – criminal activities, suggests John Banzhaf, who cites a few instances where it has been used.

Although arrests (with little threat of significant jail time) and small fines have generally be ineffective from discouraging those seeking to draw attention to causes by going far beyond their First Amendment rights to protest, and instead engaging in serious crimes against the public welfare and against completely innocent third parties, a major civil class action law suit for all the damages suffered by the hundreds of people adversely affected is much more likely to deter them from engaging in such crimes in the future, suggests Banzhaf.

The law professor notes that. under the legal doctrine of “joint and several liability,” any one person or business injured or damaged as a result of criminal rioting can sue any one or more of the criminals (joint tort feasors) actively engaged in – and not just advocating, encouraging, or even organizing – criminally destructive and unlawful rioting for the total of all the damages caused, even if it is impossible to identify with specificity which criminal caused each specific instance of damage.

If the threat of arrests and possible fines for rioters who commit serious crimes which endanger or harm others isn’t enough to deter them from engaging in criminal trespass, destruction of property, arson, looting, obstruction of traffic, destructive vandalism, and even physical attacks, perhaps it’s time for a new remedy – civil law suits by one or more victims of such crimes – says Banzhaf.

Banzhaf has been a major advocate for using legal action as a weapon against demonstrators who go far beyond their First Amendment rights and engage in serious criminal actions, often targeted at innocent bystanders, as a means of pressuring authorities to act on their grievances, since the threat of arrests – which are too often rare – does not seem to have much deterrent effect.

He says that police, for a variety of reasons, too often do not arrest illegal rioters who commit even the most serious felonies in their presence, so those who wish to engage in illegal arson, looting, vandalism, and other criminal destruction aimed at innocent third parties are encouraged to generate publicity for their cause, and pressure authorities by committing these and other crimes.

The idea of using class action law suits to punish criminal activities and deter such illegal wrongdoing is neither new nor strictly academic, notes Banzhaf.

For example, at least one law suit inspired by Banzhaf was brought on behalf of drivers effectively imprisoned (the tort of false imprisonment) by illegal blockages of the George Washington Bridge in New York City.   Indeed, now that the Supreme Court just vacated the criminal sentences of two major conspirators, this still-pending civil action may be the only hope of bringing justice to the perpetrators, and of deterring such unlawful action for the future.

Banzhaf notes that civil law suits against those who commit criminal riots in concert with others – even those actions far less serious and less harmful than burning buildings and assaulting police or even blocking traffic –  to try to advance their cause have also been successful in a number of notable instances.

As early as 1988, a federal jury found two white supremacist groups – the Ku Klux Klan and the Southern White Knights – and 11 people responsible for the violent disruption of a 1987 civil rights march in Forsyth County, Ga., and awarded nearly $1 million in damages to the plaintiffs who filed the suit.

When other groups learn that the Sea Shepherd Conservation Society has been forced to pay $2.55 million to Japanese companies for illegally using acid and smoke bombs to disrupt their whaling, they may think twice before blocking traffic or occupying buildings – much less engaging in widespread destruction – to advance their agenda, says Banzhaf, who has promoted the idea – and the very slogan – of “Suing the Bastards” when the law is broken.

In another example, a student who illegally chained himself to some construction equipment because he opposed an oil pipeline was forced to pay out big bucks for his criminal conduct.  As NPR reported it, he was apparently ready to accept a relatively painless conviction for trespass, but not to pay the pipeline company $39,000 in restitution.

Similarly, eleven protesters who allegedly engaged in illegal activities at the Mall of American faced restitution claims from the City of Bloomington.

In these and many similar situations, criminal protesters are often willing to accept a small fine and a conviction for a chance to focus attention on their cause, especially if it means they get to have a criminal trial which can generate even more publicity for them and for their grievance, argues Banzhaf.

In contrast, a civil law suit, in which each and every participant can be sued for the entire amount of the damages under the legal principle of “joint and several liability,” might serve as a much more effective deterrent than the minor threat of arrests and possible criminal prosecution, suggests Banzhaf.

While everyone has a constitutional right to protest in public, that right clearly does not extend to engaging in serious crimes to draw attention to a cause or grievance, no matter how important or righteous that cause may seem.

As illegal criminal riots by various groups continue to proliferate, causing serious harm to governmental bodies as well as to innocent third parties, those harmed may no longer be helpless, even when police refuse to take appropriate action and/or prosecutors decline to prosecute, and even when the individuals who actually caused specific harms cannot be conclusively identified, says Banzhaf.

Banzhaf, famous for developing novel and winning law suits – including over $12 million from McDonald’s over its french fries, and Spiro Agnew to recover the money he took in bribes – has been called “a Driving Force Behind the Lawsuits That Have Cost Tobacco Companies Billions of Dollars,” “The Law Professor Who Masterminded Litigation Against the Tobacco Industry,” and an “Entrepreneur of Litigation, [and] a Trial Lawyer’s Trial Lawyer.”

The post Riots Devastate (Often Black) Victims, But They Can Fight Back appeared first on ValueWalk.