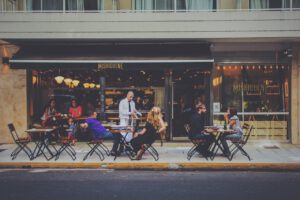 NEW REPORT: Congress Could Grow Economy by Over $270 Billion, Reduce National Unemployment by Up to 2.4 Percent By Passing Independent Restaurant Stabilization Fund

The Advantages Of Creating A Restaurant Stabilization Fund

WASHINGTON, D.C. — Congress could grow the economy by up to $271 billion, save thousands of small businesses from going under, and re-employ millions of independent restaurant workers by creating a restaurant stabilization fund, according to a new report released today by Compass Lexecon. The report — released in conjunction with the Independent Restaurant Coalition (IRC) — projects a new $120 billion stabilization fund, like the one proposed by Rep. Earl Blumenauer (D-OR), would generate at least $248 billion in economic benefits as well as reduce the national unemployment rate by up to 2.4 percent.

The authors of the economic report, five travel industry economists, note that, “the collapse of independent restaurants would ignite a downward economic spiral with ripple effects in other already hard-hit industries in the travel, hospitality and leisure sector that would be felt for years.” A catastrophic downturn would not only impact the 11 million workers directly employed by independent restaurants, but also the 5 million workers up and down the supply chain whose livelihoods depend on the viability of these establishments.

The report also describes the vital role the restaurant industry plays in our economy and our communities:

Introduction Of The RESTAURANTS Act

The Compass Lexecon report’s release comes as Rep. Blumenauer prepares to introduce the RESTAURANTS Act, which would create the $120 billion fund for independent restaurants and bars proposed by the IRC and outlined in the economic report. The fund would provide grants to food service or drinking establishments that are not publicly traded or part of a chain with 20 or more locations doing business under the same name. The funds would bridge the gap left behind by the PPP, which has not been widely available to small restaurants and has provisions that are not suited to restaurants’ current needs.

“While the independent restaurant community is especially indispensable in Portland, these establishments are important to every community across the country,” said Rep. Earl Blumenauer, whose congressional district covers portions of Portland, Oregon. “In 2009, Congress acted swiftly to save the industries we believed would help us come back from the brink of economic collapse. This time around, there’s no doubt in my mind that industry is the independent restaurant industry. I’m preparing to introduce the RESTAURANTS Act, which provides $120 billion in grants to our nation’s 500,000 independent restaurants and bars and delivers taxpayers an excellent return on investment. For every dollar spent, this program would contribute well over two dollars back to our economy. I ask that they join me in saving independent restaurants and the 11 million Americans they employ.”

Independent restaurants have been hit particularly hard by the coronavirus pandemic — new monthly unemployment data released by the Bureau of Labor Statistics (BLS) last week indicated that the restaurant industry remains the most impacted by COVID-19-related job losses. Restaurants and bars have been hit harder than any other industry, representing the largest share of job losses in both March and April.

“Watching my community members close their restaurants has been painful and something has to change,” said Gregory Gourdet, member of the Independent Restaurant Coalition leadership team and Culinary Director of Departure in Portland, OR. “Even as we gradually reopen, we have no idea how long we can stay open with limited capacity rules that prevent us from even turning a profit, not helped by the fact that the public rightfully continues to express concern about dining out. Rep. Blumenauer’s proposed bill would save many restaurants in my community, and it would undoubtedly save thousands of others.”

In late April, the IRC sent a letter to Congress outlining the need for a $120 billion stabilization fund to save the industry. After weeks of discussions with lawmakers of both parties, the IRC was invited to attend a restaurant industry roundtable discussion at the White House, where the IRC lobbied the president for a stabilization fund. The IRC argued that the fund would be pivotal to guaranteeing that the restaurants now reopening will be able to stay open.

“Independent restaurants need more help to keep their doors open,” said Mitchell Davis, Chief Strategy Officer at the James Beard Foundation. “It’s clear that investing in these establishments is the best path forward to not only saving millions of jobs and adding hundreds of billions to our economy, but also to restoring the vibrancy of our local communities. Independent restaurants are the backbone of neighborhoods – it’s time we lean into that strength and invest in these key small businesses.”

The Independent Restaurant Coalition was formed by chefs and independent restaurant owners across the country.

The post Restaurant Stabilization Fund Could Cut Unemployment By 2.4% appeared first on ValueWalk.