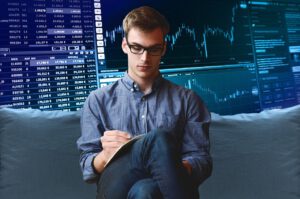 This memorandum describes the typical entity structures used when launching a new private fund. Although various factors influence the choice of entity structures used for a private fund, this memorandum will discuss the most basic considerations – namely preferences of the fund’s investors and the manager. It should be noted at the outset that different structures will involve different costs and complexities. Thus, it is important to take time and care when initially selecting the fund’s entity structures. The following discussion is provided as a source of information only and is not intended to be comprehensive or constitute legal advice. We recommend that you consult competent legal and other advisers in connection with starting any private fund.

Determining the fund’s target investor group is a threshold question in entity structuring decisions. Fund investors fall into one of three classes: (1) U.S. taxable investors, (2) U.S. tax-exempt investors (such as government or corporate pension plans, HR-10 plans, individual retirement accounts, charities or private university endowment funds), and (3) non-U.S. investors. U.S. taxable investors are best served by onshore funds that are classified as partnerships, while U.S. tax-exempt and non-U.S. investors prefer to invest in offshore funds classified as corporations. The reasons for these investor preferences are set out in further detail below.

Non-U.S. investors can participate in onshore funds. However, withholdings on U.S. source investment income, such as dividends, are required. These withholdings may be due as soon as three business days from the end of the period.

A stand-alone onshore fund structure is typically selected for U.S. taxable investors. A stand-alone fund structure comprises three entities: 1) the fund (the entity holding the securities through which the investors participate), 2) the general partner of the fund (the company responsible for the day-to-day operations of the fund) and 3) the investment manager of the fund (the company responsible for directing the fund’s trading activities). The general partner of the fund is an owner in the fund and receives an incentive allocation (assuming that the incentive fee is structured as an allocation). The investment manager does not have a direct ownership interest in the fund, but instead receives a management fee. This basic structure is shown below: 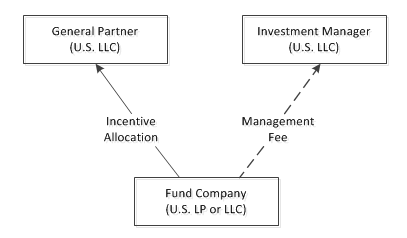 Alternatively, a stand-alone fund structure may be streamlined and comprise only the fund and the general partner. Under this structure, the general partner receives both a management fee and an incentive allocation. However, there are potential state tax disadvantages when the same entity receives both a fee and an allocation, as further described below. In addition, having a separate investment manager often facilitates the creation of later funds. The simplified structure is shown below: 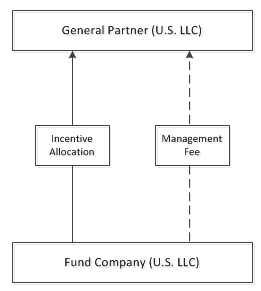 Purpose of the Fund. The fund is the trading entity that is actively marketed to investors.

Purpose of the General Partner. The general partner acts as the day-to-day manager of the fund’s operations. The general partner generally does not take an active role in managing the fund’s investments but delegates this role to the investment manager (even if the investment manager employs the same principals as the general partner). The general partner, as a direct owner in the fund, receives an incentive allocation. Receiving incentive compensation as an allocation (which is taxed at the lower capital gains and qualified dividend income tax rates), as opposed to receiving an incentive fee (which is taxed as ordinary gains), is generally better from a tax perspective. Additionally, the Tax Cuts and Jobs Act suspended all miscellaneous itemized deductions for individuals. Therefore, incentive fees are no longer tax deductible for individual investors. If the general partner receives an incentive allocation and also wishes to make a capital contribution, they should do so as an individual, as the holding period to receive long term capital gain treatment is longer for the piece related to the incentive.

Purpose of the Investment Manager. The investment manager is responsible for making and monitoring investments for the fund. Fund managers generally prefer to house investment management activities in a separate legal entity, apart from the fund’s general partner. Under most state tax laws, an entity receiving only an incentive allocation (e.g., interest income, dividend income, capital gains and losses, etc.) is not subject to entity-level state income tax because it meets the definition of an “investment company.” In contrast, if one entity receives an incentive allocation and a management fee, it cannot qualify as an investment company and becomes subject to entity-level state income tax.

Fund – Entity Selection Issues. Most domestic funds are formed as limited partnerships (LPs), or limited liability companies (LLCs) that elect to be taxed as partnerships for U.S. tax purposes because such entities are not subject to entity-level taxation. LPs are more common than LLCs because they are easier to implement and have been the long-standing industry standard. Further, for LPs, overall legal liability rests with the general partner, which may give comfort to fund investors.

While LPs and LLCs are very similar, LLC structures are preferred when different sub-entity structures are desired, such as in the case of a Delaware series structure. A Delaware series structure may be beneficial, for instance, if each fund series will have different attributes, such as the amount of leverage that can be used to trade. In such a case, if one fund series were to experience liability for some reason, investors in the other fund series will not be exposed to such liability. Also, assuming an adviser expects to operate more than three or four funds during its existence, having a series LLC makes it easier and more cost-efficient to set up a new fund by simply setting up a new series. This is because it is far easier to add a new series to a series LLC structure than to set up a new LP for each new fund. Establishing a new fund requires new legal entity formations, new offering materials and separate auditor and administrator set-up timeframes and requirements.

General Partner and Investment Manager – Entity Selection Issues. Most general partners and investment managers are formed as LLCs that elect to be taxed as partnerships and provide liability protection to all members of the LLC.

State of Formation. Most managers choose Delaware as the state of formation of the fund, the general partner and the investment manager because Delaware’s laws are business-friendly and well developed in this industry.

Income Tax Treatment. Assuming a U.S. fund is formed as an LP, or as an entity taxed as a partnership, each investor will report on its income tax return its distributive shares of the fund’s net capital gain or loss and ordinary income or loss. Each U.S. taxable investor is taxed annually on its distributive share of the fund’s taxable income and gain, whether or not it has received a distribution from the fund.

The determination of each investor’s share is a complicated process. Allocations between investors consider the economic arrangements involved and attempt to minimize disparity, which is the difference between gains and losses that an investor has recognized for book purposes compared to what the investor is taxed on.

Additionally, the fund’s taxable income may be impacted by determining if the fund qualifies as having trader status and if it should make the mark-to-market election. Based on the facts and circumstances, if a fund qualifies for trader status, it may provide for additional expense deductions for income taxes. Traders may also choose to make a mark-to-market election, which may allow investors to better utilize losses in certain circumstances.

B. Offshore Entity Choices and Domicile

Offshore Entity Choices. Offshore funds are incorporated in a non-U.S. jurisdiction and are typically taxed as foreign corporations, in order to shield non-U.S. and U.S. tax-exempt investors from the undesirable aspects of flow-through partnership taxation discussed above. Offshore funds taxed as corporations typically are not subject to U.S. corporate-level tax because they are not engaged in a U.S. trade or business. However, the PFIC rules discussed above deter U.S. taxable investors from holding an interest in an offshore corporate vehicle.

In a master-feeder structure (as further detailed below), offshore master funds are typically formed as corporations under local (offshore country) law, but elect to be taxed as partnerships by making a federal tax entity classification election (commonly known as a “check-the-box election”). This allows the master fund to be treated as a flow-through entity with respect to the master fund’s underlying investments. U.S. taxable investors will invest in the master fund (through a domestic U.S. partnership that is a partner in the master fund) and receive an allocation of master fund income or losses on the desired flow-through basis. Concurrently, foreign investors and U.S. tax-exempt entities will invest through an offshore “feeder fund” corporation that also is a partner in the master fund. The offshore feeder functions as a corporate “blocker” that blocks flow-through tax treatment for the foreign and U.S. tax-exempt investors, thus protecting them from unfavorable UBTI and ECI.

Offshore Entity Domicile. Offshore funds typically are formed in the Cayman Islands, the British Virgin Islands or Bermuda. These jurisdictions are “tax havens” and generally impose little to no entity-level taxes on funds.

The most common structuring alternatives to the stand-alone fund are side-by-side, master-feeder and mini-master structures, which are described further below. 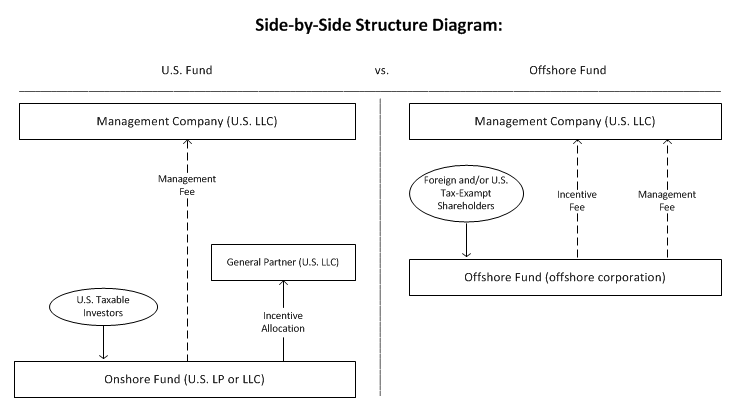 In contrast to the side-by-side structure, under a master-feeder structure, the domestic fund and the offshore fund are partners in the master fund, which is generally an offshore corporation that is taxed as a partnership. The master fund is the sole trading vehicle and holds all of the assets and securities for both funds. This eliminates the investment inefficiency of a side-by-side structure because all investment trades are conducted by a single entity.

The domestic feeder, intended for U.S. taxable investors, generally is a domestic LP or LLC (taxed as a partnership), and the offshore feeder, intended for U.S. tax-exempt and foreign investors, is an offshore corporation. Assuming that a corporate structure is selected for the master fund, the master fund must make an entity classification election to be taxed as a partnership. The most common master-feeder structure is shown below: 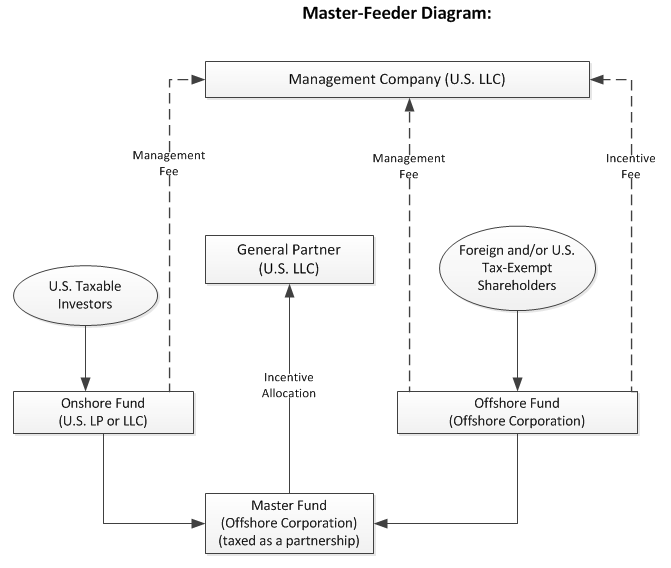 The mini-master structure is often more beneficial from a tax perspective than the master-feeder structure because it treats the offshore incentive fee as an allocation of income that frequently includes favorably taxed long-term capital gains and qualified dividend income. For example, under a typical master-feeder structure, the general partner receives its incentive allocation from the domestic fund through an allocation of partnership income. This allows the general partner to apply favorable tax rates on long-term capital gains and qualified dividend income. The investment manager receives its offshore incentive fee as a fee (as opposed to an allocation); however, that is taxable as ordinary income and is not eligible for beneficial tax treatment. 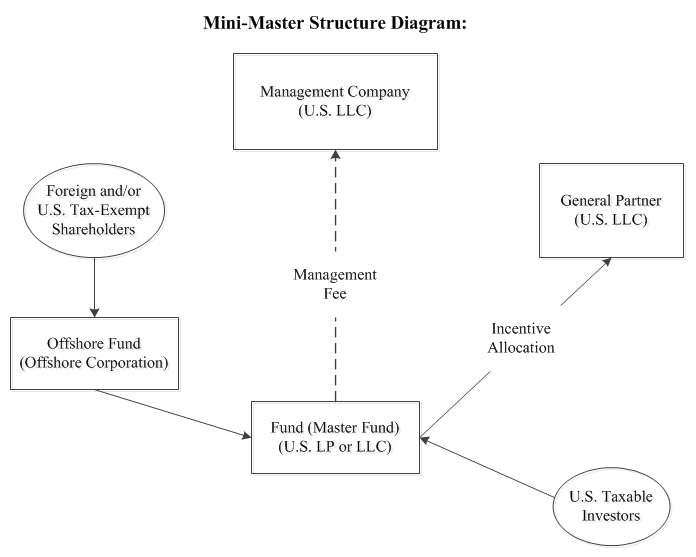 Structuring a private fund involves many considerations relating to the needs of the intended investors and the manager. We hope this article has supplied you with a concise summary of some basic fund structures that may be most applicable to you. We welcome the opportunity to discuss any of these structures in further detail, as well as other structures that may be more narrowly tailored to your particular circumstances.