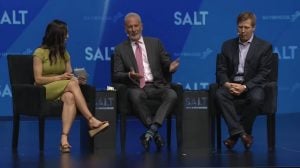 With precious metals making a massive resurgence in the past month, namely gold, Peter Schiff hopes to capitalize on the ostentatious nature of Gen Z, with their endearment for overpriced clothes and name brands. Schiff Gold is reported to start offering 18k cuban links, bracelets, and other various wearable accouterments.

“These kids need to understand that while they can personally invest in themselves by being dripped out on a daily basis with my new line of Peter Schiff Gold chains, it also serves as an investment vehicle for their future.” Schiff said.

Schiff says he was initially inspired by rapper Trinidad James’ 2013 breakout single “All Gold Everything”, but was hesitant to make the leap with gold’s weaker price point throughout the years. With gold’s recent climb, the decision quickly became inevitable.

With a generation of kids fawning over the next Travis Scott sneaker “drop”, and finding every single way to up their personal clout by getting their fits off, Schiff thinks he found the perfect entry point into this niche market.

It’s even speculated that Schiff is working exclusively with famed celebrities like Drake, Young Thug, Lil Uzi Vert, and ASAP Rocky. This “meeting of the minds” will serve as his advisory board to aid in his go-to-market strategy. If you ask me, he is well positioned in this situation and destined for success.

“These kids need to know that the Federal Reserve is the most corrupt organization on this planet. With widespread BRRR from Jerome Powell, gold and precious metals will serve as a safe haven from unlimited QE.” Says Schiff.

While most of these kids don’t care about the supposed plague affecting the American economic machine, Schiff hopes Gen Z’s newfound interest in his gold chains will spur an interest in his physical gold offering, also.

This satire article first appeared on The Stonk Market

The post Peter Schiff Expands Offering to Include Gold Chains in Hopes That Gen Z Will Buy Them appeared first on ValueWalk.