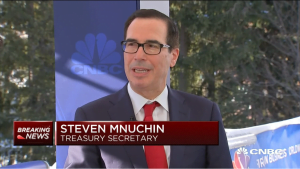 Mnuchin Says No PPP Loan Transparency Despite $500 Billion In Spending

Mnuchin Says That The PPP Recipients Will Not Be Disclosed

WASHINGTON, D.C. – In response to Treasury Secretary Stephen Mnuchin’s claim during today’s Senate Small Business Committee hearing that the administration would not be disclosing PPP recipients or how much money they got, Accountable.US released the following statement:

“The Trump administration just flip-flopped on its commitment to taxpayers that its PPP program would be transparent by announcing it will not release the names of participating companies and the amount of tax dollars that each received. Once again big companies get the red carpet treatment, while American taxpayers are told to pipe down and stop asking so many questions,” said Kyle Herrig, President of Accountable.US. Herrig continued, “The Trump administration’s PPP program has supported over $500 billion dollars in spending, but now we’re told to accept the administration’s word that it was spent wisely as evidence to the contrary grows by the day. President Ronald Reagan once said trust but verify — now the Trump administration will make it impossible to do either.”

Previously, Senator Marco Rubio said SBA and Treasury would be required to release loan level data on the PPP program. SBA’s own website claims they will soon turn to “efforts to providing loan-specific data to the public.”

What do you think about Mnuchin’s remarks? Should the PPP details be private – or should taxpayers know? Tell us in the comments section.

The post Mnuchin Says No PPP Loan Transparency Despite $500 Billion In Spending appeared first on ValueWalk.