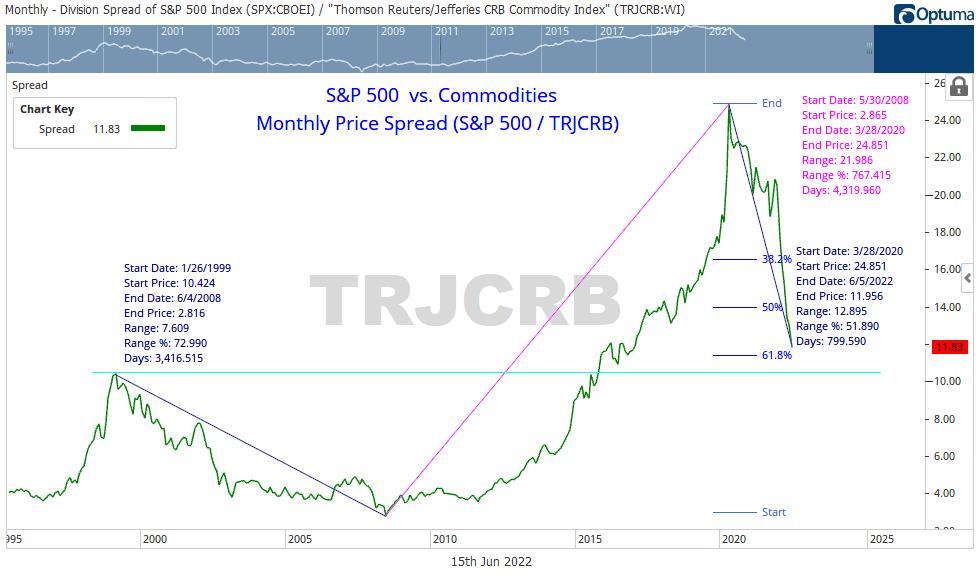 So, the whole U.S. watched the Fed raise rates by .75 bps today. And, with all the news coverage and analysis, yours truly has tried to warn you all that, whether the Fed raised by 50 or 75 bps, it does not matter.

Equities underperformed commodities from 1999 to 2009. This was followed by an 11.8-year streak of outperformance by stocks due to QE and low rates. Now, for the last 2.2 years, commodities are outperforming. Will this last for ten years?

The S&P 500 is now in a bear market for the first time since the pandemic-induced drop in 2020. The Fed raised for a third straight time. Regardless, two increases in the previous two Fed sessions had little influence on rising energy and food costs, and today’s hike will almost certainly have little effect other than potentially in the housing market.

What do we have? The knee jerk reaction of the stock market was to rally. And so did gold, silver, copper and pretty much everything except for oil and energy. Government officials, except for maybe Janet Yellen, may not want to admit it, but global macro data all points to global Stagflation.

Several days ago, the World Bank slashed global growth forecasts and warned of 1970s-style stagflation. If oil supply and demand fall for now, that complacency it will foster among investors that inflation has peaked, and the Fed is doing its job, could be dangerous.

We expect food commodities (and energy) to continue to lead inflation higher. We believe that today’s rally in equities might be met with further selling very soon once the market realizes that the Fed cannot go far enough. They raise more, the threat of recession (although it is really stagflation) ensues. They do not raise enough, and inflation goes on for perhaps the next 3-8 years.

Regardless, watch our dear Granny Retail, XRT, which is the immediate indicator on where consumers go from here.

Mish made a guest appearance on Fox Business with Neil Cavuto!

Mish was a guest on the Tuesday, June 14th edition of StockCharts TV’s The Final Bar with David Keller, where she talks looking for a bounce from the Retail ETF (XRT) and downside targets for Bitcoin.