June 18, 2020 admin
The weekly claims report released this morning was for the June BLS employment report reference week (include the 12th of the month). So it is worth taking a further look at the report.

First, regular initial claims were above expectations, and the previous week was revised up.

Third, several states have not released PUA claims yet. This includes Florida, Georgia, Oregon and others – so the number of PUA claims is too low. However, there may also be processing delays that are impacting the numbers.

Fourth, continued claims only decreased slightly to 20,544,000 (SA) from 20,606,000 (SA) the previous week. However, continued claims are down over 4 million from a month ago, so a large number of people have probably returned to their jobs (Some of these were included in the employment report for May). 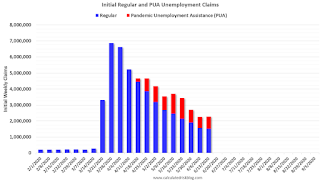 This is the 13th consecutive week with extraordinarily high initial claims.

It is possible that we are starting to see some layoffs associated with the end of some early Payroll Protection Plan (PPP) participants.

It is too soon to see layoffs associated with the rising COVID cases and hospitalization in some states (like Arizona and Texas).    Note that these states don’t have to lockdown to see a decline in economic activity.   As Merrill Lynch economists noted last month: “Most of the slowdown occurred due to voluntary social distancing rather than lockdown policies.”

Overall this was a disappointing initial claims report, but it is difficult to tell from this report what is happening to overall employment.