The number of total separations decreased by 4.8 million to 9.9 million in April, the U.S. Bureau of Labor Statistics reported today. Despite the over the month decline, the total separations level is the second highest in series history. Within separations, the quits rate fell to 1.4 percent and the layoffs and discharges rate decreased to 5.9 percent. Job openings decreased to 5.0 million on the last business day of April. Over the month, hires declined to 3.5 million, a series low. The changes in these measures reflect the effects of the coronavirus (COVID-19) pandemic and efforts to contain it …
emphasis added

Note: The difference between JOLTS hires and separations is similar to the CES (payroll survey) net jobs headline numbers. This report is for April, the most recent employment report was for May. 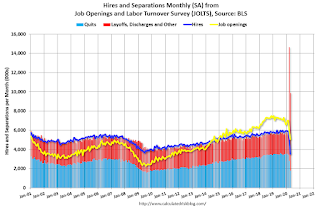 Jobs openings decreased in April to 5.046 million from 6.011 million in March.

The number of job openings (yellow) were down 31% year-over-year.

Quits were down 49% year-over-year. These are voluntary separations. (see light blue columns at bottom of graph for trend for “quits”).

Job openings decreased sharply in April, and hires were at a series low.  Quits declined almost 50% YoY – as expected, a very weak report.