July 10, 2020 admin
Note: Both Black Knight and the MBA (Mortgage Bankers Association) are putting out weekly estimates of mortgages in forbearance.

As of July 7, 4.14 million homeowners were in active forbearance, representing 7.8% of all active mortgages, down from 8.6% the week prior. Together, they represent just under $900 billion in unpaid principal.

Of those in forbearance, 37% have now missed at least three payments, whereas nearly 60% have missed two. 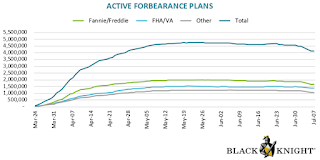 Again, recent spikes in COVID-19 around much of the country and the scheduled expiration of expanded unemployment benefits both represent significant uncertainty for the weeks ahead.
emphasis added