This gives a total of 6.85% delinquent or in foreclosure.

Press Release: Black Knight: Just One in 10 Homeowners in Forbearance Hold 10% or Less Equity in Their Homes; Share Much Higher Among FHA/VA Loans

Today, the Data & Analytics division of Black Knight, Inc. released its latest Mortgage Monitor Report, based upon the company’s industry-leading mortgage performance, housing and public records datasets. As Black Knight reported on June 5, forbearance volumes fell for the first time since the crisis began between May 26 and June 2. As Black Knight Data & Analytics President Ben Graboske explained, the focus of industry participants – especially servicers and mortgage investors – must now shift from pipeline growth to pipeline management and downstream performance of loans in forbearance.

“The first decline in the number of homeowners in active forbearance volumes is undoubtedly a good sign, particularly coming as it does on the heels of an overall trend of flattening inflow,” said Graboske. “Of course, the shift from pipeline growth to pipeline management presents its own set of challenges for servicers and investors. The good news is that equity positions among homeowners in forbearance are by and large strong. Nearly 80% of homeowners in active forbearance have 20% or more equity in their homes, providing homeowners, servicers and regulators with options for helping to avoid downstream foreclosure activity and default-related losses. Just 9% have 10% or less equity – typically enough to cover the cost of a sale of a property – with another 1% underwater on their mortgages. Of course, this leaves a population of nearly half a million homeowners who may lack the necessary equity to sell their homes to avoid foreclosure in a worst-case scenario. Looking at this population by investor, we see the share of low and negative equity borrowers in forbearance is much higher among FHA/VA loans. This segment – which has the highest forbearance rates overall – sees 19% of homeowners holding 10% or less equity in their homes.

“Despite 25% of the workforce filing for unemployment benefits, just 9% of mortgages are currently in forbearance. Further, in April, nearly half of homeowners in forbearance plans made their April mortgage payments. Just 22% of those in forbearance as of May 26 have made their May payment, signaling another rise in the national delinquency rate is likely to be reflected in May’s data. With expanded unemployment benefits set to end on July 31, it remains to be seen what impact that may have on both forbearance requests and overall delinquencies.”
emphasis added 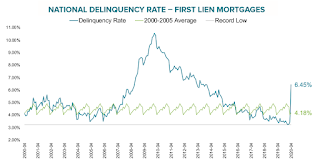 Here is a graph from the Mortgage Monitor that shows the National Delinquency Rate.

• Just three months after hitting a record low in January 2020, the national delinquency rate is now at its highest level since 2013

• After falling more than 1.5% below its pre-Great Recession average in early 2020, the national delinquency rate is now 2.25% above that benchmark and may be poised to climb higher in May

• April’s rise – the largest single-month increase on record – was nearly 3X the previous record from November 2008, during the heart of the Great Recession

• During the Great Recession, it took more than two years for the national delinquency rate to increase by the 3.1% seen in April 2020 alone

The second graph shows the number of active forbearance plans:

• As of May 26th, the number of active forbearances had begun to flatten, with a net increase of 7,000 plans over the prior week

• In total, an estimated 4.76M homeowners (representing 9% of active first lien mortgages) were in forbearance as of May 26th

There is much more in the mortgage monitor.