We are in a new world, where, in a complete reversal of traditional relationships, the markets are driving the economy and the Federal Reserve and global central banks are driving the markets. Moreover, contrary to the past, the key to MEL, the dynamic system composed of the financial markets, the economy and people’s lives, is not the state of the economy, but the current and future status of the stock market and its effects on the average person’s 401 (k) plans and their trading accounts. This in turn means that, as long as the stock market keeps rising, the odds of an all-out recession may be lower than the traditional economic models would suggest barring a truly extraordinary set of events beyond what we’ve already experienced.

The Times, They are A-Changing

Conventional wisdom and traditional economic theory is based on static, idealized and decades-old mathematical models and inflexible observations/theories which only work when conditions are ideal, which is almost never. Indeed, it is this simple reason that even traditional economists admit that their craft is not always accurate, especially during periods of rapid change. Meanwhile, MEL is a real-time system whose basic principles are based on the emerging science of complexity, the always-in-motion invisible forces of the universe which force events and reactions to events.

So, unlike the traditional models based on perfect world equations and expectations, rather than standing still, MEL never stops. In fact, MEL’s most basic principle is that the interaction between its components, i.e. agents (such as people and businesses) and the environment, are always in perpetual motion. Specifically, it is when the interactions between all the agents in the system coalesce around a central environment point, known as the Edge of Chaos, and when the chemistry and physics that take place at the edge reach the boiling point, like an erupting volcano, that systems emerge to their next level.

We Are at a Point of Emergence

Currently, there is no better example of the MEL dynamic than what we are seeing in the record-setting housing market, where the combination of riots in the streets of large cities, record-low mortgage rates and record stock markets driven by frantic central banks are fueling the migration of people to the suburbs and other locations where they perceive they will be safer. In other words, the markets, in the form of record-low mortgage rates and record high stock prices, are buoying consumer balance sheets, making it possible for those who can to qualify for a mortgage and fueling the increasingly meaningful migration.

What it means for investors is that, by picking stocks in companies who are likely to benefit from the emergence of MEL to its new operating level, the odds of success are likely to be higher than for those who don’t. Still, in uncertain times, it’s best to have a tried-and-true method through which to exercise the lowest-risk trades and to protect profits. Therefore, it’s always important to review the guiding trading principles most useful in trading along with MEL:

Especially important is the last bullet in the list, for, as U.S.-China relations deteriorate, the most important thing to note from an investment standpoint is not so much what happens, but how the market responds. This will be especially important if China decides to sell its U.S. bond holdings. Indeed, on the surface this may seem a negative, but, in fact, it could be just the opposite, as the Federal Reserve would likely buy a lot of new bonds and possibly increase the amount of money it infuses into the banking system. This, in turn, would likely fuel another round of stock buying and could lead to the next emergence point in MEL.

It may sound strange, but in this new world, what once seemed impossible is not just plausible, but likely. To find out more about stocks that should benefit from the MEL phenomenon, consider a FREE trial to Joe Duarte in the Money Options.com, click here.

And check out my latest edition of StockCharts.com’s Your Daily Five, titled “Five Stocks with Explosive Potential“, where I reveal five stocks that are poised to benefit in a big way from the latest trends in MEL.

Shares of logic chipmaker Xilinx (XLNX) bucked the general downtrend in the semiconductor space, with good reason. In its last quarter, the company made it clear that it was unsure of its business due to COVID-19 and was going to focus not just on growing the business, but on capital preservation while giving very conservative guidance for the next quarter, but no guidance for the full year. 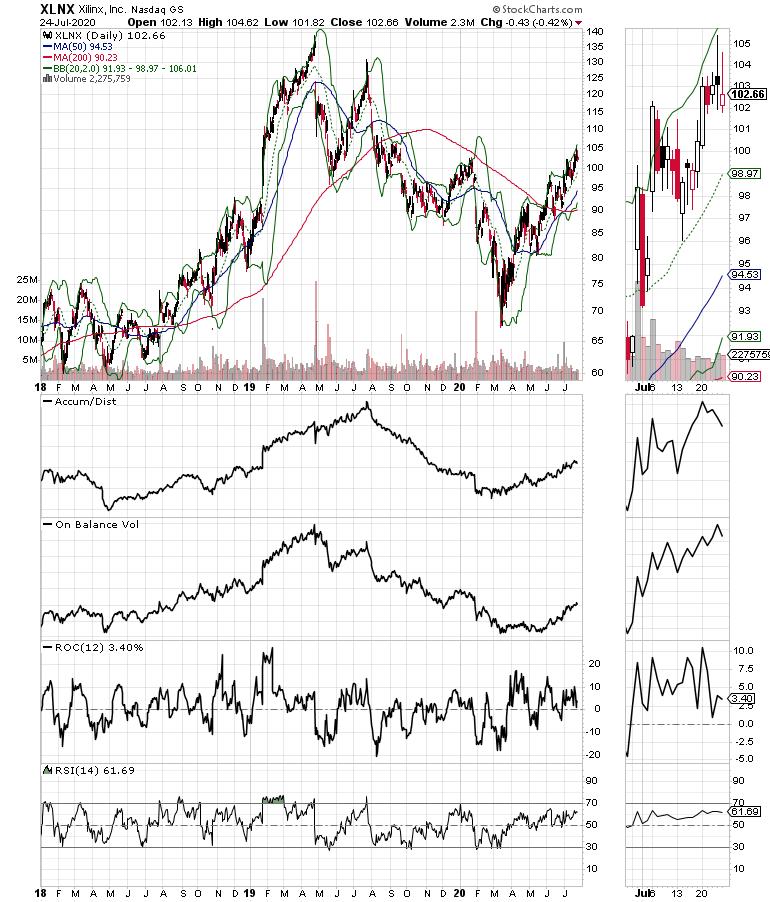 However, given the action in the rest of the industry, where most companies have delivered better-than-expected earnings, it seems likely that Xilinx will likely deliver good news for the current quarter when it reports on July 30. That said, much of what the price of the stock does after its earnings will be about its future guidance, which brings me to potentially good news.

Logic chips are very flexible chips, meaning that they are sort of a blank slate which can be programmed, even in the field, to perform specific functions. As COVID-19 has developed, so has the demand for computing power. This has likely increased demand for logic chips to be used as companies increase their communication and server needs.

The stock is in a bullish and steady rise at the moment, trading above its 20- and 50-day moving averages. That places it in the Complexity zone, where stock prices tend to rise. Moreover, Accumulation Distribution (ADI) and On Balance Volume (OBV) are moving higher in a pattern that suggests the stock is under long-term accumulation while the stock is not close to overbought yet. If XLNX can move above $107 in the short term, the odds favor an acceleration of its uptrend.

Recent industry data revealed that the options market is now larger than the stock market. To learn to trade options with less risk, buy a copy of my bestselling book Trading Options for Dummies, available here.

The New York Stock Exchange Advance Decline line made a new high this week, before rolling over as rising tensions between the U.S. and China boiled over. Nevertheless, NYAD held well above the support of its 20- and 50-day moving averages. That means that the uptrend gets the benefit of the doubt for now. 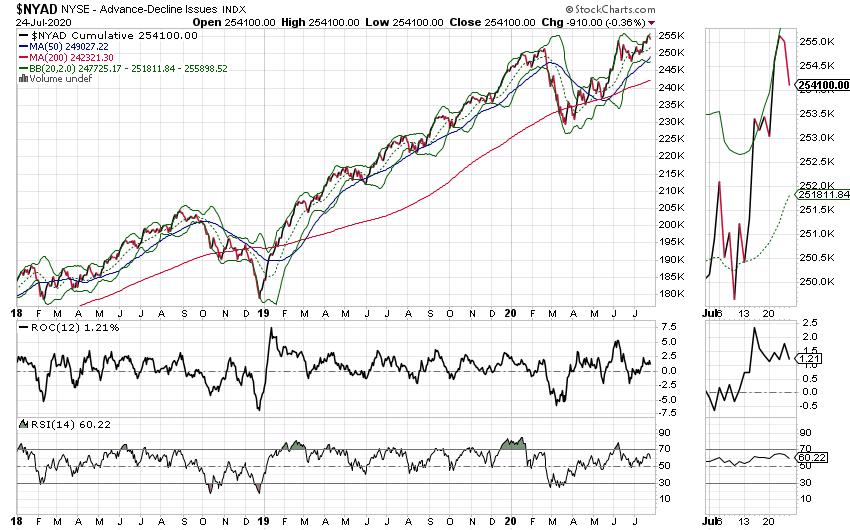 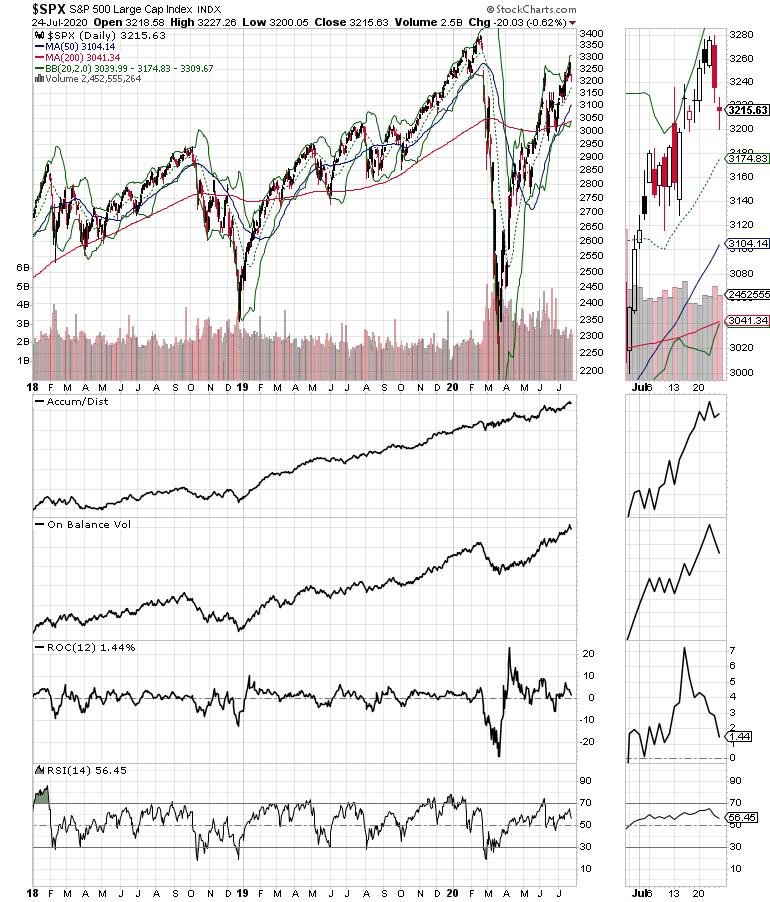 On the other hand, the Nasdaq 100 Index (NDX) broke below its 20-day moving average as profit-taking accelerated as bad news from Intel (INTC) on its next generation chip hit the wires on Thursday afternoon. Of some concern also was the break below on the ROC indicator, which is a sign that upside momentum has now weakened significantly. 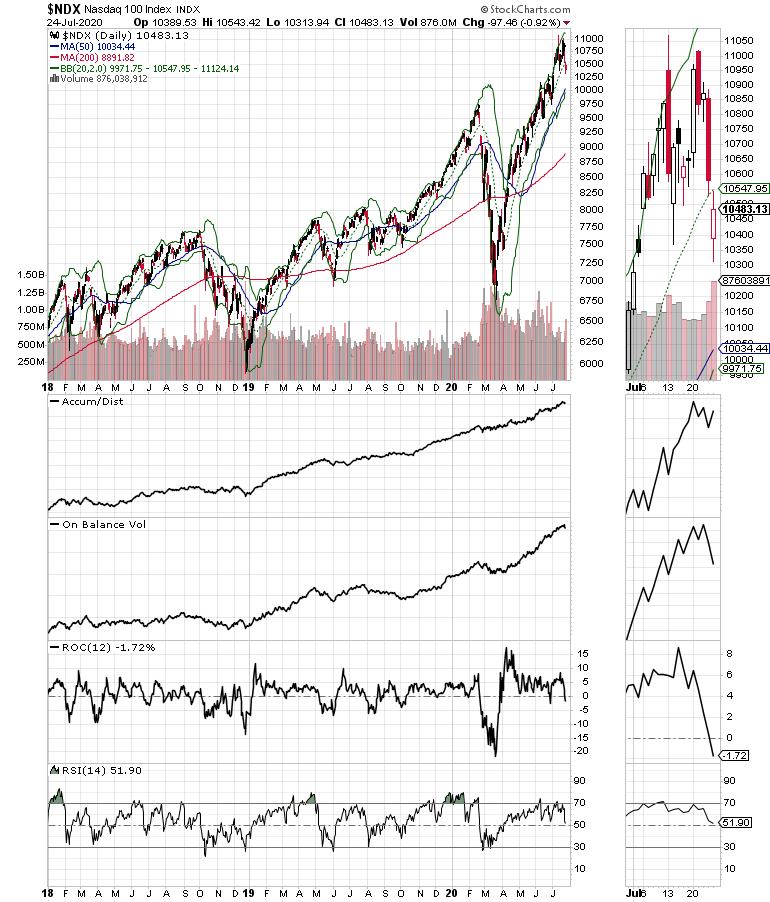 Watch Your Stocks First, then the Market

Because trading algorithms have a greater effect on the pricing of the major stock indexes, a very bad day for “the market” may or may not be as negative for your own portfolio. That’s because your stocks may not be in the primary sell matrix that the algos concentrate on. In other words, while the major trend will eventually affect most stocks if it remains in place long enough, when making buy or sell decisions, it’s best to primarily focus on the price action of your stocks and on the value of your account.

Moreover, as the U.S. and China’s relationship sours, expect more daily market volatility, especially in overnight futures markets and in the price action of the major indexes. Best of all, by following the sound trading principles described above, as well as concentrating on your own portfolio and how it performs against the market, it will be much easier to make the right decision with any stock you own.

I own shares in XLNX.