With earnings season gearing up, a rising election and COVID-19 uncertainty, the actions of the Federal Reserve are now more important than ever. There’s no doubt that no one knows which way the future will unfold. That said, at least in the markets, technical analysis can help us sort through the clouds of uncertainty, especially over the next few months.

A couple of weeks ago, I noted that the New York Stock Advance Decline line (NYAD) was close to triggering a Duarte 50-50 Rule sell signal. The signal appears when the NYAD falls below its 50-day moving average at the same time that the corresponding RSI indicator falls below its own 50 level.

Luckily for bullish investors, the signal failed to fully materialize and the uptrend remains intact for now. However, as I describe fully below, another important indicator is now telling us that a big move in the stock market is likely in the not-too-distant future. Therefore, in order to prepare for that move, investors should ask these important questions.

What is the status of Federal Reserve liquidity?

The primary factor in this market remains the Federal Reserve and QE. Accordingly, there were two concerning items in that regard last week. One was that the New York Federal Reserve is floating the idea that, if markets continue to do well, they may actually stop QE. The second one was that the Fed’s balance sheet has shrunk three weeks in a row, a factor that has coincided with recent market volatility.

What is the dominant market trend?

The dominant market trend remains up, but we are clearly in a consolidation pattern that looks set to resolve soon. Moreover, the direction of that move is the key to the market’s trend.

Are my stocks keeping up with the dominant market trend?

Regardless of the market trend, if what you own isn’t working, it’s probably time to make changes. So consider taking profits in stocks which have gained 20% or more. Moreover, get rid of losers, especially if the market is up and you still own stocks that are down more than 5-to-8%.

What’s on my Radar Screen?

Once you’ve optimized your portfolio, if the trend remains up, it’s a good idea to replace the stocks you sold with new ones that are acting well. Ideally, you want to stack the deck with companies whose management are doing the right things and whose price charts are showing signs of accumulation.

For more on these portfolio management techniques and stock picks that work, consider a FREE trial to Joe Duarte in the Money Options.com by clicking here.

Is GILD the Rodney Dangerfield of the Biotech Sector?

What’s up with Gilead Sciences?

I recently saw a headline mocking a rally in the futures market, which seemed to have been spurred by a positive press release from biotech viral kingpin Gilead Sciences (NSDQ: GILD). After a detailed review of the company, its management and its price chart, I started to wonder why, given its solid drug portfolio and earnings history, Gilead, like the late king of the self deprecating one-liners Rodney Dangerfield, gets no respect.

The headline was based on the news that the company’s COVID-19 drug, remdesivir, reduced mortality rates on hospitalized patients with the virus by 62%. That means that, based on backward-looking data, roughly six out of ten people that might have died lived because they received remdesivir. Be that as it may, the analysis which followed the headline suggested that Gilead was cherry-picking results in order to hype the drug, while suggesting in a thinly-veiled fashion that remdesivir doesn’t really help anyone.

So what gives? Sure, remdesivir is not a certain cure for COVID-19. And it may never be anything more than decent results when the drug is used in the right setting. But GILD does not live by remdesivir alone. For one thing, it essentially owns the antiviral market, especially in HIV, where it continues to dominate.

Does anyone remember that Gilead’s Harvoni and Sovaldi cured Hepatitis C and are still selling well? Or that the company is now a leader in generic versions of the drugs, with over 60% of that market? Moreover, Gilead’s Tamiflu is a staple treatment for non-COVID-19 flu.

How about its successful treatments for chronic angina, pulmonary hypertension and rare forms of cancer? Moreover, the company is preparing to launch Filgotinib for rheumatoid arthritis in the U.S., Europe and Japan while owning a deep pipeline of drugs in key stages of development. 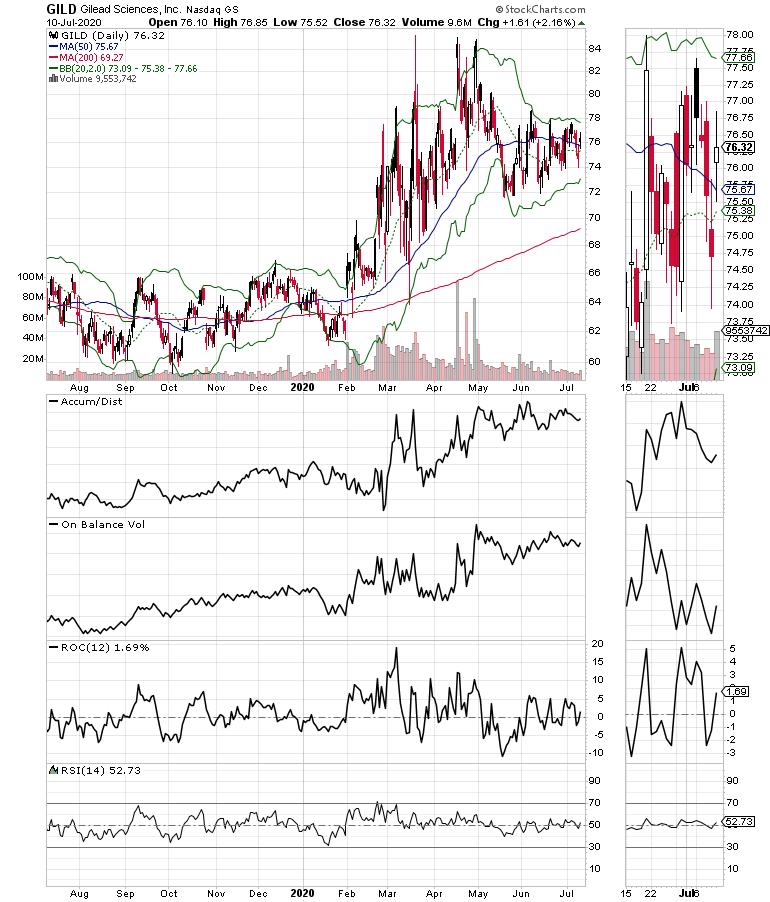 So why isn’t the market moving this stock higher? After all, remdesivir is the only drug approved by the FDA and other international regulatory agencies to treat COVID-19. In fact, remdesivir has recently been approved in Europe, Australia and India, while the company is investing $1 billion to study an inhaled version of the drug.

Even more interesting, remdesivir is already a money maker. The U.S. government recently bought all the supply that was available, 500,000 vials at $390 per vial, and little will be available to the world until September. Interestingly, analyst estimates are for potential yearly sales of the drug as high as $8.5 billion, which may be optimistic. But even at $2 billion in annual sales, remdesivir would be a blockbuster. That’s a potential $500 million per quarter on average.

Moreover, what else do we have to treat COVID-19 with? Similarly, vaccine data is not particularly encouraging given the fact that, even if one is developed soon, the odds for lifetime immunity from it seem to be low. And what are the alternatives? Certainly, the controversial malaria and lupus drug hydroxychloroquine and the old steroid dexamethasone have been helpful in some cases. But, at the end of the day, there is no universal treatment.

So, why would Gilead spend a billion in researching a drug that they know doesn’t work? Why are countries all over the world approving the drug? And why is it sold out? Does any of that make sense when you look at a price chart in a consolidation pattern? Is management deluding itself, or is the market getting it wrong?

The lack of answers is bewildering. But this much I know – if I ran Gilead, and I thought I had a dud, I wouldn’t spend a billion on it.

Be that as it may, the stock is still showing a stop-and-go trading pattern with resistance at $80 after it broke out of a long term base in the 60s. On the bullish side, the stock remains above its 50- and 200-day moving averages with good support near $72. Indeed, if the stock can move above $80 consistently, it could move significantly higher.

In conclusion: owning GILD could be painful. And it could take a long time before it pays off, if at all. But consider the fact that COVID-19 doesn’t seem to be going anywhere, at least for at least for a few more months, and that there are few treatment alternatives.

Moreover, even if it slows down at some point, the virus could easily come back on a seasonal basis. And if that’s the case, just on restocking sales, Gilead could generate revenue, possibly sizable revenues from remdesivir. And if that’s the case, given the existing sales of its other franchises, its pipeline, and the potential for a lot of intangible developments, this stock might be the ultimate contrarian play as the market misses the boat.

Sure enough; like how Rodney Dangerfield, a guy with slick hair, big eyes, a cheap suit, and an out-of-fashion skinny red tie, became wealthy while getting no respect, GILD may eventually be a pleasant surprise for patient investors. We will certainly know more after Gilead reports earnings on July 28.

The New York Stock Exchange Advance Decline line (NYAD) has been flirting with disaster for the last month as it has threatened to trigger a Duarte 50-50 Rule sell signal. Thankfully, is the signal has yet to be triggered, which means that the stock market remains in an uptrend. And while that may change at any time, the longer that NYAD holds above the sell signal point, the lower the odds of a significant decline. 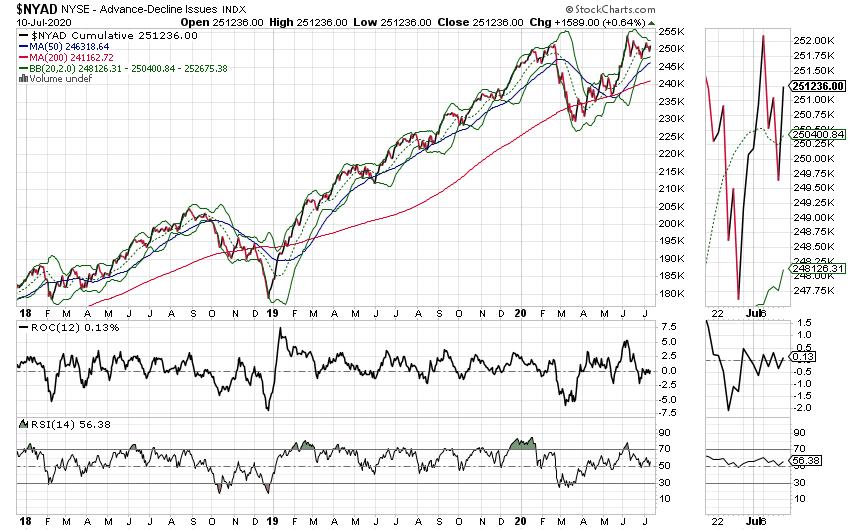 Perhaps the most interesting aspect of NYAD this week is the shrinking Bollinger Bands (green bands above and below the line). This, as I mentioned above, is usually a sign that a big move in the market is coming.

Moreover, there are some technical clues that suggest that the move, when it materializes, may be to the upside. Of course, there are no guarantees, as there is always the potential for headline risk and/or false starts.

Still, note that the most recent dip in NYAD held well above its previous low. Also note a similar occurrence in ROC and RSI. When you put these subtle chart findings in perspective, combined with the narrowing of the Bollinger Bands, they suggest that the odds favor an upside breakout, as investors have been buying stocks during the consolidation. 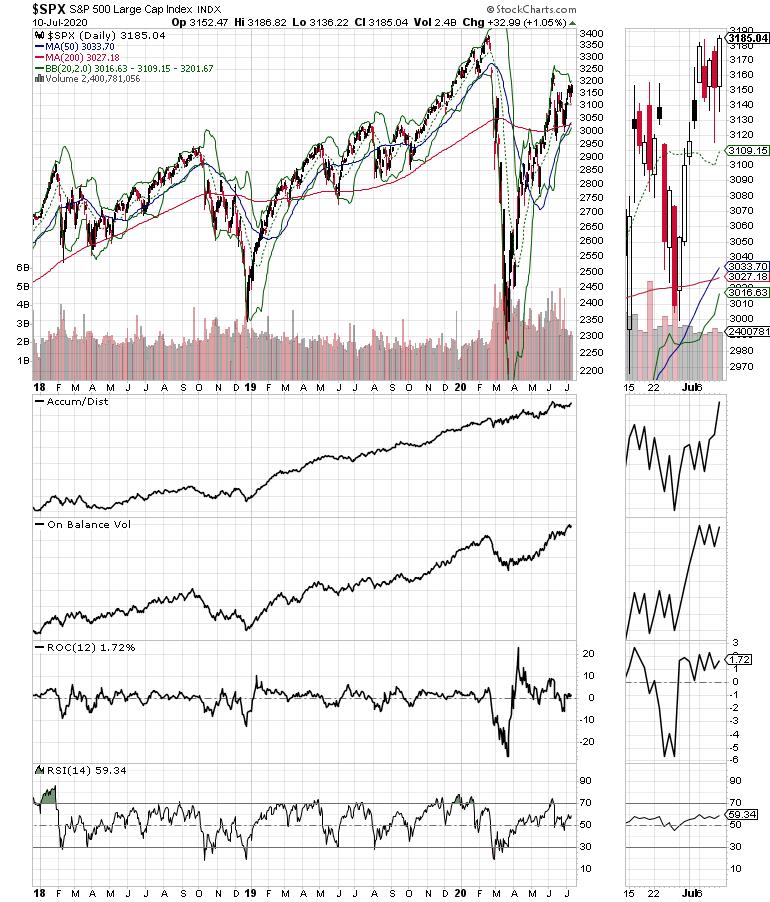 The S&P 500 (SPX) is mirroring the action on NYAD with an encouraging upturn in Accumulation Distribution (ADI) and On Balance Volume (OBV). 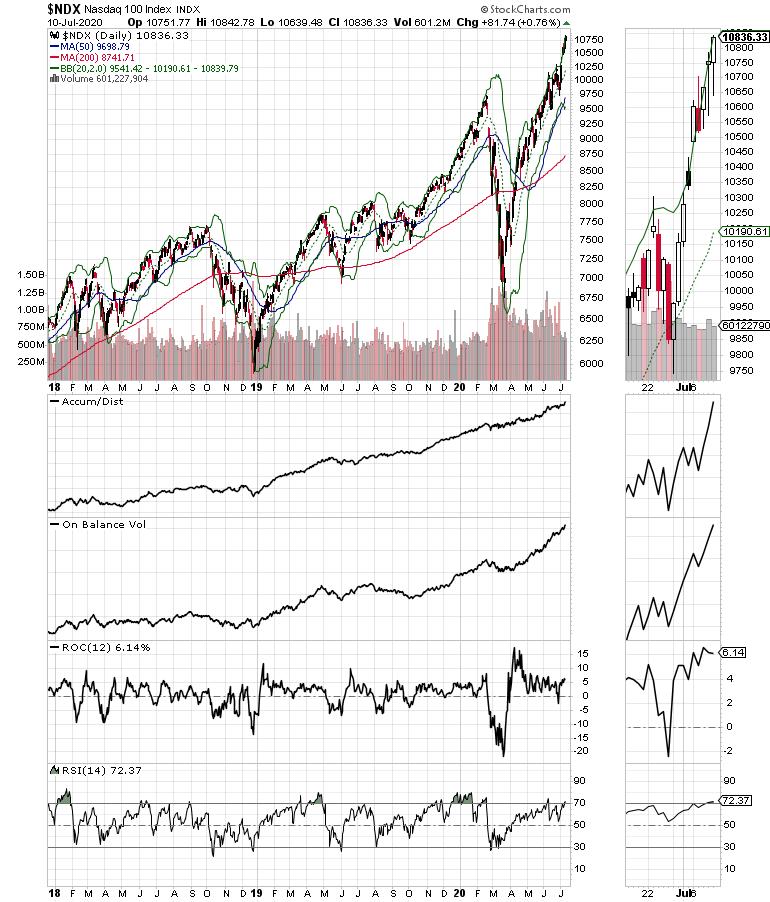 Meanwhile, the Nasdaq 100 (NDX) has been making new highs under heavy buying of tech stocks. NDX, however, is now becoming overbought. Also, the recent pullback in biotech and the consolidation in the semiconductors could put the brakes on NDX, at least in the short-term.

Without the Fed there is No Market

A big move in stocks is likely coming. Certainly, there are technical clues that suggest that the move could be to the upside. But the fly in the soup is what the Federal Reserve does with its current QE initiative and whatever earnings season turns into.

Specifically, if the Fed pulls the plug on QE, especially if it does so in response to the perception that the market is doing well enough and that central bank liquidity is not necessary, they will be making a big mistake. In other words, regardless of the technical indicators, without the Fed, unless earnings are extraordinarily good (which is doubtful), there is little reason to own stocks at current valuation levels, especially as the election rhetoric is heating up and the COVID-19 uncertainty is rising.

I own shares in GILD.