If the Federal Reserve doesn’t change its current policy implementation methods, the 1800 point decline in the Dow Jones Industrial average we saw on June 11 will happen over and over again.

The two major rules to follow when investing in stocks are: 1) Don’t fight the Federal Reserve, and 2) Don’t fight the market’s momentum. But what are investors supposed to do when the Fed makes it clear that interest rates will remain near zero for two years and the market crashes?

Certainly one thing I’ve learned over the years is that when things don’t add up, it’s time to re-evaluate assumptions and positions. Of course, the market had come a long way since the March bottom. And, as I noted in this space last week: it seemed as if we were “entering a momentum run in stocks. And as everyone knows, all momentum runs end badly, although they are very exciting as they develop.”

Moreover, referring to the hard choice that was facing investors who had missed the rally from the March bottom, I noted: “it’s hard not to see that hedge fund managers and individual investors who first avoided the rally and who, in some cases, had increased their short positions over the last two weeks of social unrest, will have to go back to the drawing board and consider whether to chase the stock market’s rally clear momentum acceleration. What makes this an even riskier decision is that, after a nearly complete reversal of the bear, stock prices may be beyond reasonable valuations, which means that when the rally is over, the ensuing decline may be even worse than what we saw in the early days of COVID-19.”

The Bazooka is Shooting Blanks

A selloff of that magnitude could only have been caused by a complete liquidity shutdown, which prompted the high-frequency trading algos and market makers to either step aside or to continue to mark stocks down in price until somebody took a chance on buying stocks. The problem is that no one stepped up with any real conviction until Friday afternoon.

How did this happen? Well, the Fed promised to keep interest rates low until 2022. That was bullish. But, at the same time they cut their liquidity infusion into the capital markets to $3.5 billion per day, from the original $75 billion per day, the so called Bazooka maneuver, which they implemented when stocks crashed earlier this year.

So, without hedge funds trading, the market was left to depend on the new wave of money that is moving stocks these days – day traders reportedly financed by government stimulus checks. The bottom line is that what we saw on Thursday, and which we may see again on any given day from here on out, was purely a liquidity vacuum made worse by high-frequency trading bots whose prime directive is to exaggerate the trend, up or down.

The bottom line is that the Fed is suddenly all talk and the bazooka is shooting blanks.

We are caught in a bind. On June 10, the Fed made it known that interest rates would stay low until 2022. On June 11, the market crashed on reported fears of a second wave of COVID-19. But would the selling have been so severe if the Fed had been pumping $50 billion into the money markets instead of $3.5 billion? Probably not, I would wager.

Indeed, what that means is that the primary issue facing all investors now is how much easy money the Fed will decide to inject into the money markets on a daily basis, if it indeed expects that stock prices can stay up when bad news, such as the COVID-19 headlines that rocked the market last week, hit.

To summarize: The Fed won’t raise interest rates for two years, which is historically a signal to buy stocks. But, this time is actually different because while it’s keeping interest rates low, it’s also putting less money into the financial system on a daily basis, hoping that low interest rates will keep things afloat.

That’s a big tactical error, because there is too much debt in the system at the same time that economic activity has been significantly reduced by COVID-19. Therefore, in this market and economy, low interest rates without insane amounts of money being pumped into the system by the Fed simply won’t work. So either the Fed bites the bullet and throws caution to the wind, or the market action we saw on June 11 will be a regular occurrence.

There are still some interesting stocks in this market. And I have compiled a small list of companies whose stocks are showing relative strength and may be worth owning. The list can be accessed via a FREE trial to Joe Duarte in the Money Options.com.

In a market that’s crashing and burning, it’s difficult to find stocks which display relative strength. One interesting candidate is Monster Beverage (NSDQ: MNST), the company responsible for the Monster Energy drinks. 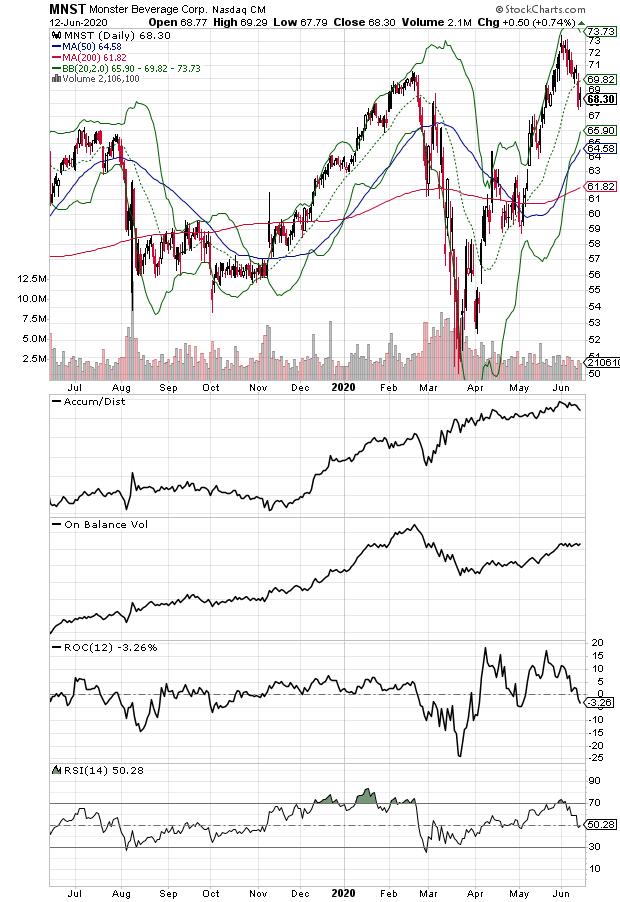 When compared with the shares of its two largest competitors in the soft drink sector, Coca Cola (KO) and Pepsi (PEP), Monster was clearly a cut above during last week’s selloff. This is likely to stem from the fact that, although COVID-19 made a dent in its convenience store sales, as would be expected, the virus’ effect was much less than what it was on its competitors, given its niche, especially during challenging times in which people need energy boosts in order to perform daily tasks under stress. In fact, the company reported a slight gain in market share in its most recent earnings.

Moreover, the company registered rising sales in its products sold through Amazon.com in the U.S. while also registering gains in Europe. The stock is off of its recent high, but has good support near the $67 area. A sustained move above $70 could take the stock significantly higher if the market holds up.

The major indexes got crushed, but the New York Stock Exchange Advance-Decline line (NYAD), the most accurate indicator of the market’s trend since November 2016, held above the key support levels of its 20-, 50- and 200-day moving averages. 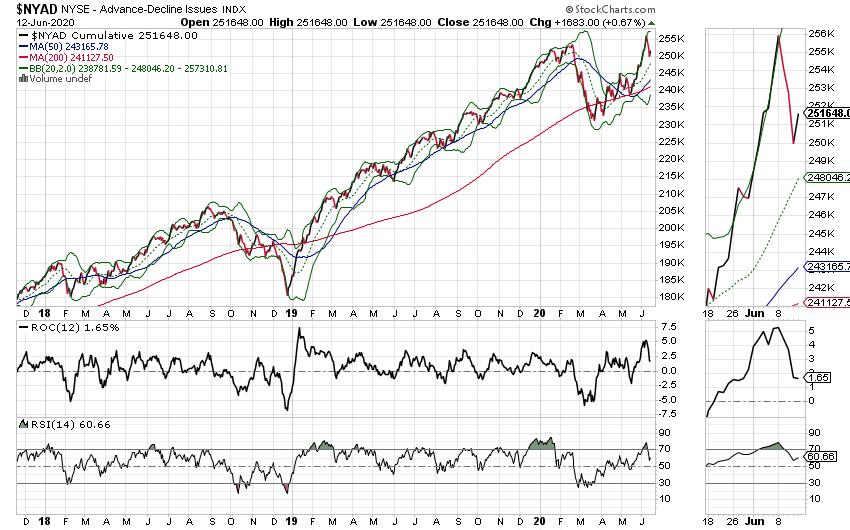 Moreover, the aggressive decline in stocks moved NYAD’s RSI to the 50 area, which is often good support when the downtrend is temporary. So, if RSI and the moving averages don’t break down further, we could see a resumption of the uptrend. 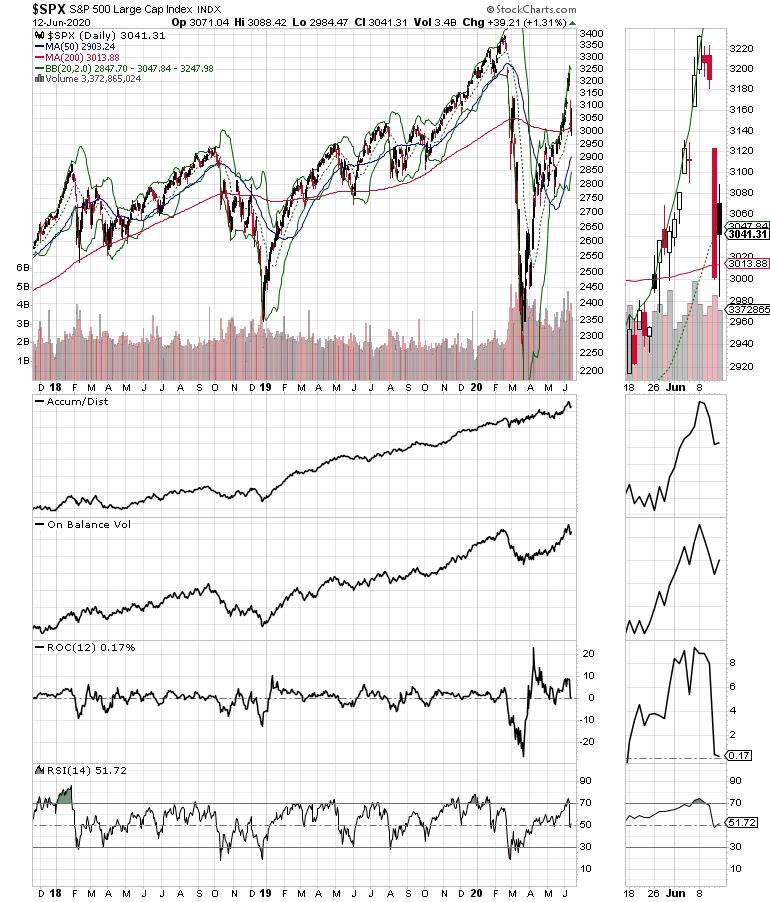 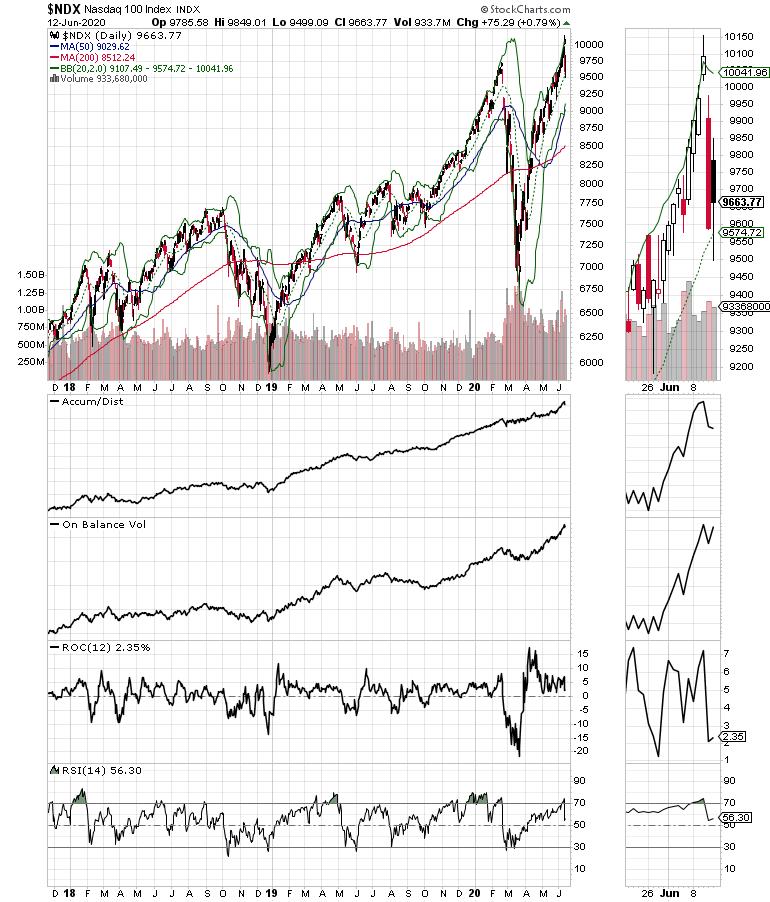 Meanwhile the Nasdaq 100 (NDX) performed similar acrobatics near its 20-day moving average. Interestingly, both NDX and SPX saw an upturn in On Balance Volume (OBV) on 6/12, suggesting that there was likely some short covering and maybe even some dip buying on 6/12.

MEL Does Not Live By Interest Rates Alone

The complex adaptive system known as MEL (the markets, the economy, and people’s lives) has a major structural problem.

The Fed can’t stop injecting money into the financial system or everything will crash. Zero interest rates mean nothing to the economy or the markets if there isn’t any money circulating in the system. The only possible outcome of such bipolar maneuvering from the central bank is that the highly indebted economy and the liquidity-propped stock market will both grind to a halt in the face of high unemployment, social unrest and COVID-19 fears.

The sudden reversal in stocks last week is proof of the above-stated premise. Certainly, lower interest rates have proven to be the major boost for stock prices historically, but moreso over the last twelve years. This relationship has held up well regardless of economic fundamentals for large periods of time. But it seems that low interest rates aren’t enough anymore. As a result, given the fact that the Fed just told the markets that it wouldn’t raise interest rates for two years, now they have to raise the amount of money they put into the system.

Furthermore, we are at an impasse between the two major factions interacting in the market: hedge funds that are savvy players who understand the liquidity situation and are, thus, generally bearish and have missed the rally from the March bottom, and day traders, who are inexperienced, poorly capitalized and are purely focused on momentum.

Which brings me to this rather concerning final point. In a market where artificial intelligence is programmed to accentuate the underlying trend, whether it’s being fueled by hedge funds or day traders, trading the markets is about to get even more interesting. That’s because, if either side the actually wins this battle, the emerging trend, whether up or down, is likely to be spectacular.

I own shares in MNST.