I’ve been bullish on this market since soon after the mid-March bottom. However, I’m not taking a victory lap, as I full well know that the market is a perverse beast and that, once today is over, no one knows what tomorrow will bring. Moreover, it seems as if we are now entering a momentum run in stocks. And, as everyone knows, all momentum runs end badly, although they are very exciting as they develop.

Still, after Friday’s shocker employment report and blowout rally, it’s hard not to see that hedge fund managers and individual investors who first avoided the rally and who, in some cases, had increased their short positions over the last two weeks of social unrest, will have to go back to the drawing board and consider whether to chase the stock market’s rally clear momentum acceleration. What makes this an even riskier decision is that, after a nearly complete reversal of the bear, stock prices may be beyond reasonable valuations, which means that, when the rally is over, the ensuing decline may be even worse than what we saw in the early days of COVID-19.

Indeed, the latest U.S. jobs report is likely to be a game changer, as it refocuses investors on the return of MEL, the complex adaptive system composed of the markets (M), the economy (E) and people’s lives (L) to a tangible recovery mode while taking attention away from the Federal Reserve as the primary reason for stocks to rise. Of course, the Fed is still carrying the heavy load; thus, it would be a mistake for the central bank to pull away its stimulus aggressively at this point. Moreover, monetary easing is not likely to fade in the near future, as the Fed now has some help as the European Central Bank (ECB) and the Chinese central bank have begun aggressive QE programs.

Last week, in this space, I wrote: “Famed technician and collaborator of the late Marty Zweig, Ned Davis, is known for asking the question “Do you want to be right? Or do you want to make money?” And as crass and cynical as the words may sound to the uninitiated, truer words were never spoken in the context of being a stock trader,” and I’m standing by those words, especially after the employment report and the market’s response to the numbers.

Indeed, as I’ve noted repeatedly here, when events are at the edge of Chaos (EOC) as they have been for the past few weeks, things happen. Specifically, the EOC is where the actions of Complexity, the ruling forces of the Universe, are most meaningful due to those actions reaching the point of emergence complex adaptive systems, such as MEL, as they evolve to new operational levels.

In this case, it is now plausible to consider that the U.S. economy is on a path to some level of recovery. What that means is that analysts and economists will now have to reassess their earnings and GDP estimates, respectively, and when they do, it will likely trigger trading algorithms to buy stocks and move prices higher.

Should I Stay or Should I Go?

If you bought stocks near the March bottom, as we did at JoeDuarteInTheMoneyOptions.com, your portfolio is in good shape at the moment. But, if you missed the rally, you have a decision. If you bought at the right time, you now have to figure out whether to take profits if you’ve got them or to ride the trend out longer. Meanwhile, if you missed the rally, you are now faced with the prospect of playing catchup knowing full well that to buy stocks at current prices in hopes that there is more upside left is likely to be a higher-risk proposition than in was two months ago.

Of course, this is the timeless dilemma in life and in trading, especially when the stock market is essentially back to even after a six week 36% decline due to an external factor such as COVID-19 earlier this year. And certainly, the answer is almost never clear.

On the positive side, the Federal Reserve is still pumping liquidity into the markets, albeit at a slower pace. Moreover, the European Central Bank and the Bank of China are now aggressively putting money into their respective bond markets, a fact that could extend the current rally. Still, as the jobs number revealed, there is now the possibility that some sort of recovery has started in the U.S. Indeed, a recent Rasmussen poll shows that 51% of Americans know someone who has returned to work. What it all boils down to is that the odds of the big picture changing are rising.

So, depending on which way the algos are programmed, the market could increase its rate of ascent or succumb to profit-taking, and even a major selloff, now that it’s back to even.

So what’s the best approach to your portfolio at this time? I will say this much; all investment decisions are personal and are based on one’s risk profile. Nevertheless, the answer as to what to do in this market should become clear if we apply the prudent money management principles listed below:

If you follow those simple steps, the odds will be in your favor.

For more on these key principles, to learn more about Complexity and Chaos in the market and to review how to pick stocks for the Post New Normal, check out my latest StockCharts TV Your Daily Five video by clicking here. In this video, filed on 6/5/2020, I discuss how the 6/5/2020 employment report has changed the market, plus key portfolio guidelines to help you stay on the right side of the market.

Intel: The Wind at its Back as Laptops and Cloud Chip Demand Increases

Shares of Intel Corp. (NSDQ: INTC) delivered a breakout on 6/5/2020. Moreover, what makes this stock interesting is that the stock has shrugged off the expectations of major losses after the U.S. government stopped U.S. chip companies from trading with China’s Huawei.

Anyone who’s followed Intel over the years knows that its heyday was in the early days of the PC and the laptop, circa 1990. Since then, even though the company is a major player in the semiconductor space, there just hasn’t been much glamour associated with their worker bee chips which power such mundane tools. So the stock has mostly bounced around. 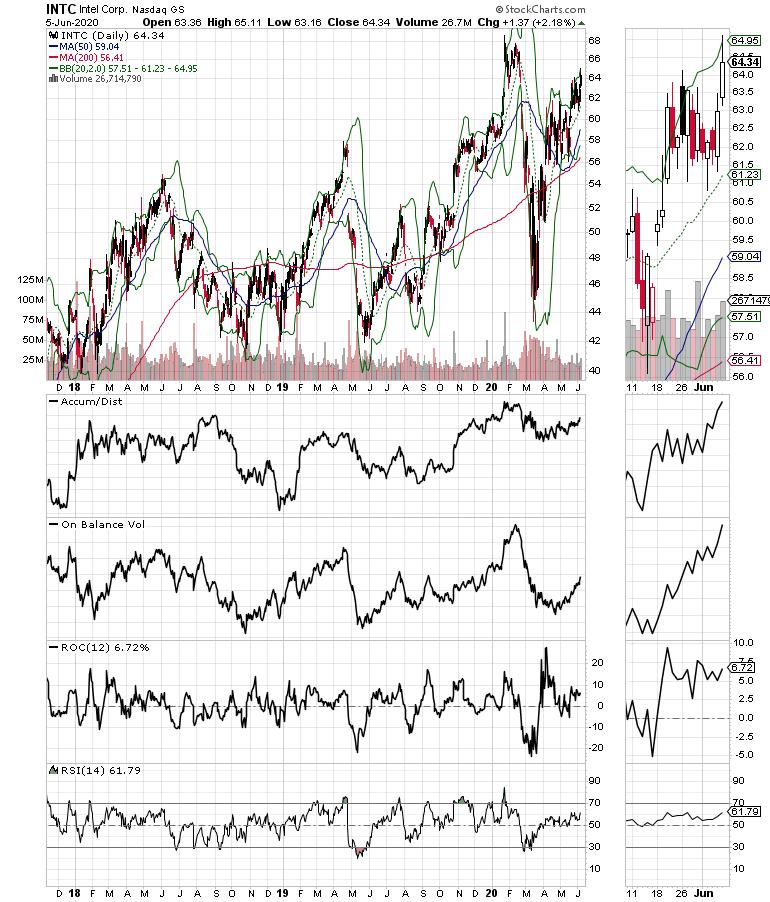 But the world has changed and what was mundane yesterday is suddenly necessary and sexy today. This is especially true for Intel, as more people work from home and laptop sales are likely to rise. Moreover, those laptops are going to have to be faster and will be expected to be more portable, more secure and more versatile, especially when connected to Wi-Fi. Furthermore, chip demand is already exploding as cloud companies expand their server capacity in response to the changing global environment – 5G, increased bandwidth requirements, more sophisticated networks and more reliable connectivity.

Finally, with a P/E ratio near 12, with positive recent guidance, a steady dividend and positive money flows as documented by Accumulation Distribution (ADI) and On Balance Volume (OBV), the stock looks poised to move toward $70 in the next few weeks.

It’s hard to be too bearish when the New York Stock Exchange Advance Decline line makes new highs for the current move on a regular basis. But it’s nearly impossible to be bearish when this highly reliable indicator made a new all time high on the heels of a better-than-expected May employment report. 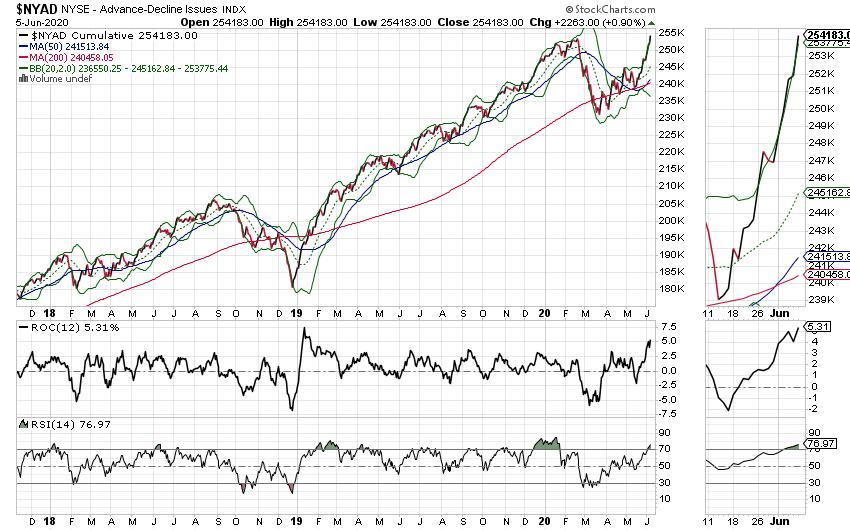 Nevertheless, we are now at the moment in the rally when momentum has taken over. And that means that we should be watching for signs of that momentum fading. At this point, there are none, but it’s important to note that RSI for NYAD is now above 70, which is overbought. It can stay that way for a while, but it’s worth watching. 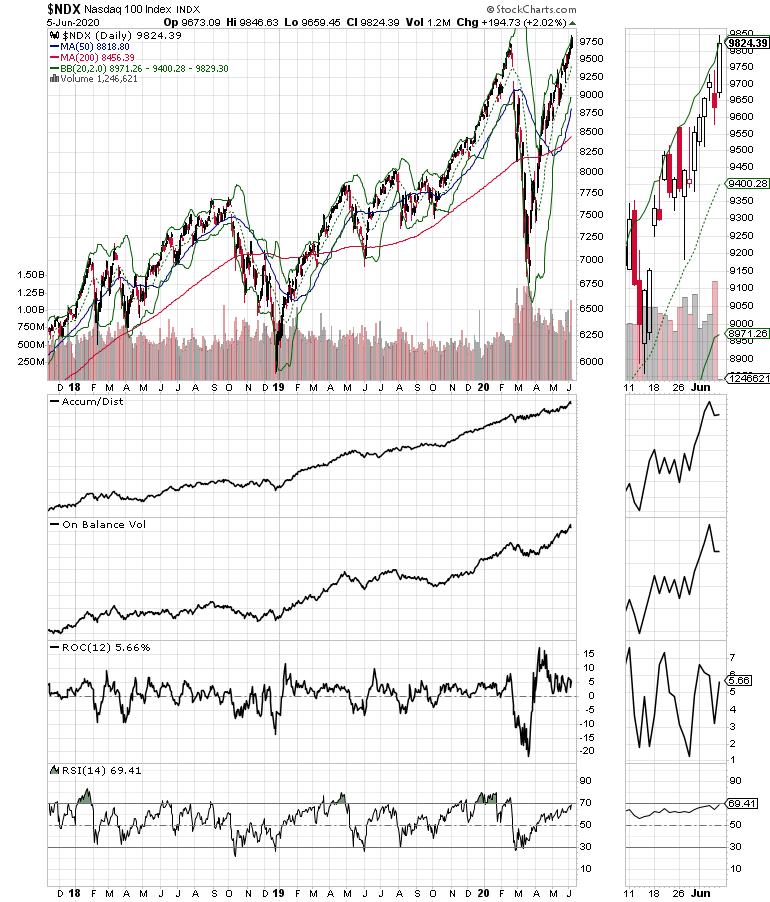 The Nasdaq 100 index (NDX) confirmed the new high on NYAD behind the reignited rally in the large-cap technology sector. 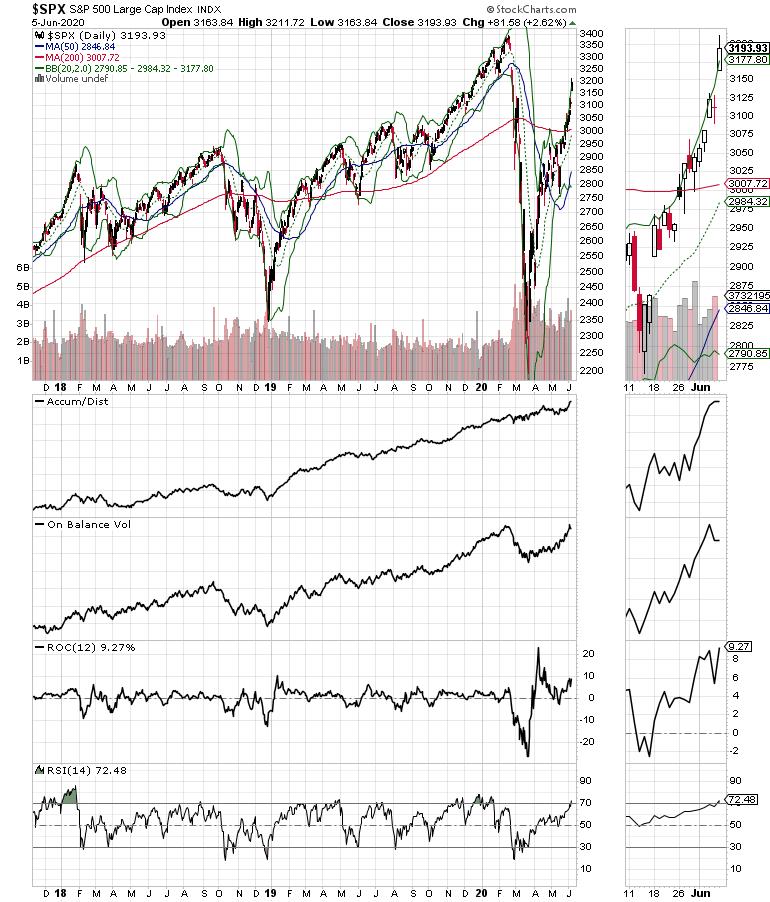 Meanwhile the S&P 500 (SPX) moved above 3200, although it has yet to make a new high. Nevertheless, Accumulation Distribution (ADI) and On Balance Volume (OBV) are very supportive at this time, suggesting that money continues to move into stocks.

When the May jobs report shocked the world, it delivered a welcome surprise to those of us who are long stocks. But, the fact is that it wasn’t out of the realm of possibilities. Over the last few weeks, I’ve noted that housing activity has improved and that freeway traffic in Dallas, where I live and commute, had vastly improved. These are indicators which, in the past, I have found to be useful in predicting the state of the economy.

What I’m saying is that, when in doubt, trust your trading plan and your observations of daily life. Moreover, your plan should include indicators which monitor the market’s trend, the direction of interest rates, key sectors and stocks and the general state of the economy, often beyond the official statistics.

In other words, by knowing the status of key components of MEL, gauging their reaction to events and being prepared for all contingencies you will increase the odds of success for your portfolio.

I own shares in INTC.