Comparison of Benchmark Performance Over the First Four Months of 2020

With the expected sunset of LIBOR at the end of 2021, the banking community has been actively working to develop other potential benchmark rates.  The Federal Reserve sponsored Alternative Reference Rate Committee (ARRC),[1] has endorsed the Secured Overnight Funding Rate (SOFR) as its preferred replacement.  However, unlike the unsecured LIBOR rate, SOFR is a secured lending rate and is therefore expected to perform differently in a crisis period where credit spreads widen.  For this reason, many financial institutions have objected to the use of SOFR as the replacement rate for bank loans and called for the regulators to consider other rates.[2]

AMERIBOR, which has been up and running since December 2015 and meets all the International Organization of Securities Commissions (IOSCO) criterial[3] for a benchmark rate, has become a viable alternative to SOFR.  Its performance during the first part of 2020 when compared to SOFR and LIBOR in the height of the COVID crisis illustrates why banks may want to benchmark more of their lending to AMERIBOR.

SOFR versus AMERIBOR and LIBOR

Table 1 below charts the performance of the three overnight rates, from January 2020 through May 2020, and shows the two major Federal Reserve rate cuts in early-March and mid-March.

Two things can be easily seen from Table 1, specifically: 1) that SOFR tends to be more volatile than either LIBOR or AMERIBOR; and 2) that just as various banks predicted, during a crisis period credit spreads between the secured SOFR rate and unsecured AMERIBOR and LIBOR, rates widened significantly (as can be seen subsequent to the second mid-March Federal Reserve rate cut).

Table 2 below further drills down into these spread differences by day.  SOFR, which is really a capital markets rate, exhibited significant volatility concurrent to the rate cuts.  For instance, on March 4th and 13th, 2020 SOFR spiked and was higher than AMERIBOR and LIBOR.  Likewise, on March 17th, 2020, probably the most volatile day in the money markets, SOFR was close to 30 basis points (bp) higher than both AMERIBOR and LIBOR due to market stress.

By the middle of the week of the second rate cut (once the action was absorbed by the market), the expected pattern developed where the unsecured AMERIBOR and LIBOR have a greater overnight risk premium than the secured SOFR rate.  For instance, on March 23rd, 2020, AMERIBOR had a 23 bp spread.

This spread slowly narrowed to 10 bp on April 14th, 2020 as the markets stabilized and has have since ranged from 15 to 7 bp, which is still much wider than observed during the first two months of 2020.

LIBOR in contrast, although widening out more than AMERIBOR to 28 bp, has gradually narrowed to less than 5 bp (although there was a slight negative spread for much of the first two months of 2020).  We believe this narrower spread is explained by the fact that LIBOR is expected to be replaced by SOFR, so we would expect to see the rates converge.

SOFR rates are based on more than a trillion dollars of daily repurchase transactions, executed by large-money center banks, so there is a deep underlying market.  However, that market can be extremely volatile.  This volatility was observed during several highly publicized periods in 2019.  A September 2019 spike in underlying transaction rates to more than 9% (when the normalized rate was in the 2.5% range), ultimately required the Federal Reserve to step in and commence stabilizing activities to restore better price equilibrium.  Even with the Federal Reserve’s stabilizing actions, similar volatility was also present during the peak of the COVID crisis, as seen below in Table 3. 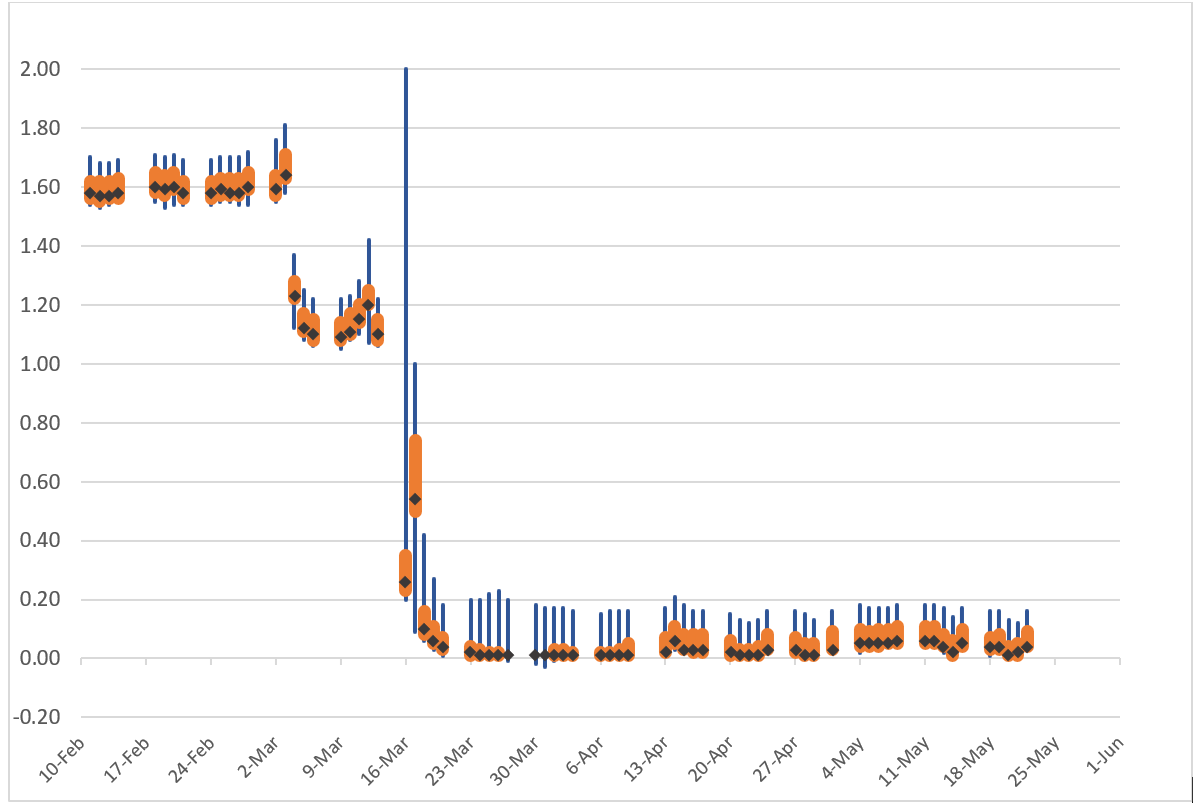 The chart clearly shows that there was a tight band of rates leading up to early March.  Then as the COVID crisis hit the capital markets, the range between the 99th percentile and the 1st percentile widened significantly.  On March 16th, some trades were at 2 percent where as others were only at 20 bp.  The chart also shows that for three days at the end of March, many SOFR trades transacted at negative rates.  The range between the 99th and 1st percentile has remained elevated for some period but has slowly reverted to a narrower band noted pre-crisis.

Currently, both SOFR and AMERIBOR only have an overnight rate (unlike LIBOR there is no term structure)[4] whereas LIBOR rates extend to one-year.  Therefore, the above analysis of credit spread widening on overnight rates is muted, as the probability of a counterparty defaulting in a week to a month to a year is much greater than simply overnight.   The concern banks express about using SOFR as a benchmark rate for loans is illustrated in Table 4 below.

This table compares the overnight LIBOR rate to the for 1-week, 1-month, 3-month, 6-month and 1-year LIBOR.  As the charts shows, spreads over the maturity stack did not exceed 45 bp for the first two months of 2020. However, once COVID was absorbed by the market, tenor spreads blew out almost three times to more than 130 bp (between the 3-month and overnight rates).  Since early April, spreads over the tenor stack have been narrowing but remain much wider than observed during the first two months of the year.

It should be noted that most banks tend to lend based on 1-year or 3-month LIBOR, therefore this widening of credit spreads is extremely material to banks.  If their loans were denominated in SOFR (rather than as they currently are in LIBOR), banks would experience significant net interest margin compression.  This was invariably one of the key reasons (system readiness being the other), why banks raised significant concerns about using a SOFR rate in the Federal Reserve Main Street Lending Program.[5]  If AMERIBOR had term rates extending to 3-month and 1-year, we would expect them to parallel the more extensive spread widening observed with LIBOR (in fact they may even be wider as demonstrated with the overnight rate).

Scandals aside, the key concern with LIBOR and why it is slated for sunset is that in many cases, it is not based on actual transactions, but instead on theoretical rates where banks would stand-ready to transact (also known as “expert judgement”).

This lack of submission by LIBOR panel banks was highlighted in the Bank of England’s May Financial Stability report, which shows that during the week of March 16th (the peak of the turbulence), the majority of the 35 published LIBOR rates across the five currencies contained no submissions based on primary bank funding transaction, such as unsecured term deposits and commercial paper.[6]  Even in US dollar LIBOR, which tends to be the currency with the most underlying submissions by panel banks, transaction volume shrank during this core week particularly in the 1-month and 3-month categories.[7]

In contrast to LIBOR activity, AMERIBOR volumes became more robust over the peak COVID period.  Although AMERIBOR does not have a trillion dollars of daily transaction activity like SOFR, the activity it does have is broad based.  Arguably, SOFR trades are dominated by relatively few large capital markets participants, as well as the Federal Reserve, which has sought to stabilize the rate through its interventions.  The American Financial Exchange has approximately 180 primary members (generally mid-size regional banks) and hundreds of other smaller institutions participating via these primary members.  Although AMERIBOR is based on only a fraction of the SOFR volume, it has good market breadth and is not subject to “stabilization” by the Federal Reserve.  Therefore, it is a true unsecured market rate.

Table 5 below shows daily transaction volumes for AMERIBOR from over the last five months.  What can clearly be seen from this chart is that volumes did not decrease or evaporate during the peak of the COVID market dislocation, instead they became more robust.

For instance, for the first two and a half months of 2020 (through March 13th), American Financial Exchange (AFX) transactions underlying the AMERIBOR rate average $1.9 billion per day.  The remainder of March (the last 15 days) saw volumes increase to $2.7 billion per day, this is a 42 percent increase in volume during a period where base LIBOR trades became even more scarce. Clearly the AFX interbank lending market and the corresponding AMERIBOR rate has both a resiliency and stability that was significantly lacking in both SOFR and LIBOR.

Table 6 shows the average daily transaction volume over certain periods to more dynamically show how robust underlying market activity has been during the COVID period.

For the first month post the key crisis date of March 16th (note that the Federal Reserve cut rates on Sunday March 15th), AFX transaction volumes were $2.649 billion or 36 percent higher than the first two and half months of 2020.  And for the first 45 days (March 16th to April 30th) they were $2.597 billion or 33 percent higher.  Therefore, the AFX has proved to be uniquely resilient during this period and has significantly deepened its transaction volume during a period of severe market stress which is particularly commendable for a benchmark.

In the view of many market participants, AMERIBOR is now ready for prime time.  Its stellar performance over the COVID period of market stress, demonstrates that it is worthy of serious consideration as a viable benchmark alternative to LIBOR.  Not only did the rate experience low volatility and widened as expected versus secured rates, but underlying transaction volume materially increased.  The rate is IOSCO compliant and a corresponding regulated futures contract also trades.  Banks can currently use this combination of financial instruments to get cash flow hedge accounting.

The only thing lacking is a term structure, but we expect to see significant progress in this area over the course of the second half of 2020.  Therefore, banks may want to start to incorporate AMERIBOR into future lending plans as a possible benchmark successor to LIBOR.  They could also begin to include AMERIBOR within their current LIBOR based loan agreements as a potential fallback rate should LIBOR cease to be published or become non-representative.

[1] The ARRC is a group of private-market participants convened by the Federal Reserve Board and Federal Reserve Bank of New York in cooperation with other Federal Regulators to identify risk-free alternative reference rates for U.S. dollar LIBOR, identify best practices for contract robustness, and create an implementation plan with metrics of success and a timeline to support an orderly transition.

[2] On September 23, 2019, ten large regional banks sent a letter to the Federal Reserve, Office of the Comptroller of the Currency and the Federal Deposit Insurance Corporation objecting to the use of SOFR as a benchmark rate for commercial lending given its secured nature.  They wrote “During times of economic stress, SOFR (unlike LIBOR) will likely decrease disproportionately relative to other market rates as investors seek the safe haven of U.S. Treasury securities.  In that even the return on bank’s SOFR-linked loans would decline, while banks’ unhedged costs of funds would increase, thus creating a significant mismatch between bank assets (loans) and liabilities (borrowings).”  On February 26, 2020 another group of ten banks, this time smaller mid-sized regional banks, sent a similar letter to the same group of Federal banking regulators outlining the same concerns.

[3] IOSCO is the International Organization of Securities Commissions (a global group of securities regulators) which issues Principles for Financial Benchmarks in July 2013.  The group identified nineteen individual benchmarks grouped into the following areas:  Governance; Quality of the Benchmark; Quality of the Methodology; and, Accountability.

[4] Both the ARRC and the American Financial Exchange, the Administrator of AMERIBOR, are actively working to create a term structure.