CPI-W is the index that is used to calculate the Cost-Of-Living Adjustments (COLA). The calculation dates have changed over time (see Cost-of-Living Adjustments), but the current calculation uses the average CPI-W for the three months in Q3 (July, August, September) and compares to the average for the highest previous average of Q3 months. Note: this is not the headline CPI-U and is not seasonally adjusted (NSA).

The 2021 Q3 average was the highest Q3 average, so we only have to compare Q3 this year to last year. 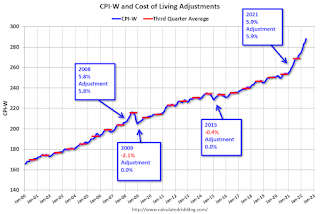 Note: The year labeled is for the calculation, and the adjustment is effective for December of that year (received by beneficiaries in January of the following year).

CPI-W was up 9.3% year-over-year in May, and although this is very early – we need the data for July, August and September – my very early guess is COLA will probably be close to 9% this year, the largest increase since 11.2% in 1981.

The contribution base will be adjusted using the National Average Wage Index. This is based on a one-year lag. The National Average Wage Index is not available for 2021 yet, but wages probably increased again in 2021. If wages increased 4% in 2021, then the contribution base next year will increase to around $153,000 in 2023, from the current $147,000.

Remember – this is a very early look. What matters is average CPI-W, NSA, for all three months in Q3 (July, August and September).