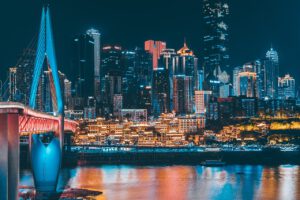 The acceleration of a new Cold War has been drastically ramped-up by China’s president Xi Jinping on Sunday and investors need to take note, says the CEO of one of the world’s largest independent financial advisory, asset management and fintech organizations.

The observation from deVere Group’s Nigel Green follows a major speech in Beijing at the Communist Party congress at which Xi took on an unprecedented third term at the helm – putting him on track to be leader for life.

He says: “The Congress, which only takes place twice a decade, is set to have a considerable impact on the global economy for years to come.

“In order to best position themselves to create, build and maintain wealth, investors have to pay attention to the content and tone of Xi’s speech.”

There are five key takeaways for investors, notes the deVere CEO.

“First, economic growth will be slower than in previous times. Xi reasserted China’s focus away from rapid growth and towards national self-sufficiency.

“Clearly, as the world’s second-largest economy, this will have an enormous impact on global growth,” he affirms.

“However, many experts insist that even with a reduced rate of growth, it is likely that China could overtake the U.S. as the world’s largest economy within a decade.

“But this will depend heavily on how it overcomes obstacles such as an aging population.”

Nigel Green continues: “Second, Xi appears to be taking an even more strident approach against the United States, his country’s main superpower rival, as both nations push to become the ultimate global dominant force militarily, politically, culturally, and economically.

“Both are battling to control security infrastructures, trade, commerce and economic systems, the development and regulation of technology, as well as international norms, practices and values.

“There’s no doubt that the antagonism between the world’s two most powerful nations has become more entrenched, more explicit, and more aggressive in recent years and this was reflected in Xi’s speech.

He hammered home the party’s policy of dual circulation – driving growth through domestic demand – which is a nod to decoupling from the West.

“To my mind, this all sets the stage for a new Cold War, which will have a global impact.

“The effect of a new Cold War will be even more impactful globally than that of the first because of the economic interdependence of the world’s two largest economies. China and the U.S. together account for over 40% of the global economy.”

The deVere CEO adds: “Third, Xi doubled down on Beijing’s zero Covid policy which is of huge concern for investors. Not only is China a dominant economy, but it’s also a manufacturing powerhouse, meaning investors and businesses are concerned about the continued restrictions’ impact on economic activities and global supply chains.

“Fourth, China will have coal and renewables working in tandem. Xi said his country will not stop burning fossil fuels until green energy can reliably and cheaply step in.

“And fifth, technology remains of key importance as Xi focuses on a divergence from the West in terms of tech, self-reliance and state-led initiatives.”

Investors around the world will be dissecting Xi’s Congress speech for clues about how to position their portfolios, says Nigel Green.

“The world economy, and the futures of billions of people, are going to be largely shaped by Xi’s vision for the future.

“As ever there will be winners and losers. Investors will be combing through the detail to see which asset classes, sectors and regions will benefit to readjust their portfolios to seize the opportunities.”

deVere Group is one of the world’s largest independent advisors of specialist global financial solutions to international, local mass affluent, and high-net-worth clients. It has a network of more than 70 offices across the world, over 80,000 clients and $12bn under advisement.