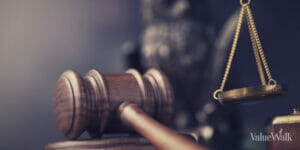 WASHINGTON, D.C. (December 5, 2022) – During the Supreme Court’s oral argument this morning in the 303 Creative case, in which Colorado argued that a website designer’s refusal to prepare one for a same-sex wedding constitutes illegal discrimination.

He also notes that virtually all the hypotheticals posed seemed to be one-sided. The analysis and answers might have been very different if Colorado had tried to require 303 Creative to prepare a website for a wedding:

It was also strange that both attorneys seeking to defend Colorado’s actions tried to rely upon a Supreme Court case which turned out to be an utter rout for the many law schools and distinguished law professors who brought it; something Prof Banzhaf (who opposed it) pointed out in Media Very Critical of Law Schools and Law Profs Who Bungled the Solomon-Amendment Military-Access-to-Campus Case.

More importantly and fundamentally, Banzhaf suggests that the arguments this morning largely ignored a crucial distinction between:

Refusing to provide a product or service based upon protected characteristics of the customer (e.g. the customer’s race, sex, religion, sexual orientation, etc.) VS

Refusing to provide a product or service based not upon a protected characteristic of a customer, but rather upon the speech/message conveyed (e.g., for or against same-sex marriage, abortion, atheism, etc.)

In other words, so long as a website designer would decline to provide a website with certain themes or messages for all customers of all sexual orientations (e.g., the straight parents of the groom, straight friends or grandparents), there would be no legal liability; but if the refusal were based upon the sexual orientation of the customer actually ordering the website, it would be illegal.

Since some same-sex marriages involve two heterosexuals who marry for various reasons other than love or sexual attraction – e.g., for tax and/or inheritance advantages in certain circumstances, two elderly straight widows living together, etc.) – refusing to design a website for a same-sex wedding would not necessarily involve discrimination based upon sexual orientation because it could impact both gay and straight prospective clients.

The customer-status vs. message distinction is, in fact, the position of almost half of the states, all of whom have similar statutes prohibiting discrimination. As they told the Supreme Court in their brief amicus curiae:

“This distinction is based on a message Smith cannot convey and not on the status of any customer. Pet.App.6a (“Appellants’ objection is based on the message of the specific website; Appellants will not create a website celebrating same-sex marriage regardless of whether the customer is the same-sex couple themselves, a heterosexual friend of the couple, or even a disinterested wedding planner requesting a mock-up.”).

Or, as Justice Neil Gorsuch put it this morning, a businessperson’s objection would not be based on the status of the same-sex couple, but instead, the message the businessperson did not want to send. The question isn’t the “who” Gorsuch said, but the “what.”

Prof Banzhaf notes that similar issues have been resolved without violating free speech rights on the one hand, and a right to be served by a public accommodation regardless of a customer’s race, sex, religion, sexual orientation, etc. on the other, by court decisions which balanced the apparently competing interests, says public interest law professor John Banzhaf.

An appellate court struck an interesting balance between the free speech and religious freedom rights of businesses which oppose messages based upon their content, and gay people who insist upon being served by a business regardless of their sexual orientation.

It follows a legal analysis similar to that originally proposed by public interest law professor John Banzhaf who suggested that anti-discrimination statutes prevent discrimination based upon the characteristics of a customer (e.g., being gay), but not refusal upon a refusal to send a message related to that characteristic.

Kentucky’s Court of Appeals held that a t-shirt firm which refused to print t-shirts promoting a gay pride festival did not discriminate against gays, drawing a sharp distinction between refusing to serve customers who happen to be gay, and refusing to print shirts which may support gay activities.

As the court put it, “the ‘service’ [defendant] HOO offers is the promotion of messages. The ‘conduct’ HOO chose not to promote was pure speech.”

This simple distinction is also illustrated by two decisions involving bakeries. In the first, the Colorado Civil Rights Division ruled that a cake shop could not refuse to make a wedding cake for a gay couple, calling it discriminatory, because its refusal was based upon the sexual orientation of the customers.

However, when a man ordered cakes with writing a Denver bakery considered derogatory towards gays, its refusal to provide the cakes was upheld because the bakery would refuse to provide a cake with that language to any potential customer – gay or straight, Christian or atheist, etc., and for any purpose.

Although the customer claimed that the refusal to provide a cake with this message was “demeaning to his beliefs,” the agency said the owner was within his rights to refuse to put a message on cakes which included “derogatory language and imagery,” provided it would do so for all customers.

In the Kentucky case, although the business accepts and serves all customers, the messages the company is willing to print are “limited by the moral compass of its owners,” and it refuses “any order that would endorse positions that conflict with the convictions of the ownership.”

This is a clear and simple distinction between the customer and the message he wishes to send.

To refuse to sell any t-shirt to a person simply because he is gay would violate the statute, whereas refusing to print a t-shirt which promotes or criticizes a gay lifestyle or activities for anyone is not illegal discrimination.

The court noted that agency’s analysis (which it reversed) – which asks whether the message was discriminatory – would lead to “absurd” results: for example, “a man who requests t-shirts stating, ‘I support equal treatment for women,’ could complain of gender discrimination if HOO refused to print the t-shirts because it disagreed with that message.”

Similarly, Banzhaf’s published analysis had suggested that a baker who refused to bake a swastika-shaped cake for a white supremacist group would not be guilty of illegally discriminating on the basis of race if he had a policy against baking a cake in the shape of a swastika, whether it is ordered by a German Nazi sympathizer, a racist fraternity, a Jewish student seeking to “take back” the hated symbol (similar to a recent situation at GWU), a crude friend who wants it as a joke, etc.

In each case, there is no discrimination based upon a protected factor because the baker is treating all prospective purchasers the same, regardless of sexual orientation, gender, religion, etc.

Naturally, the argument in favor of the baker who did not want to bake a swastika-shaped cake celebrating white supremacy might seem stronger if he were Jewish and it was also based upon his religious beliefs.

Indeed, one judge in the Kentucky case did cite statutes designed to protect religious freedom, and which require governmental actions which substantially burden religious freedom to be struck down unless they pass the “strict scrutiny” test.

Thus, he said, “the central issue here is whether the fairness ordinance is the least restrictive way . . . to prevent local business from discriminating against members of the gay community without imposing a substantial burden on the exercise of religion.”

Banzhaf suggests that the former analysis – preventing discrimination based upon a specific protected characteristic of the customer (e.g., his sexual orientation) and not on whether objection to the message might be based upon religion, is better and fairer, since it means the government (bureaucrat or judge) doesn’t have to engage in an often-subjective balancing act regarding how compelling is the government’s interest, are there other feasible approaches, etc.

Indeed, notes Banzhaf, reasonable and fair minded bakers might not want to decorate a cake with writing which promoted anti-Jewish white supremacy even if they were not Jewish, or indeed followed no religion.

They should enjoy the same freedom as the Jewish baker not to have to engage in expressive conduct to which they object, regardless of the grounds for the objection, argues Banzhaf.