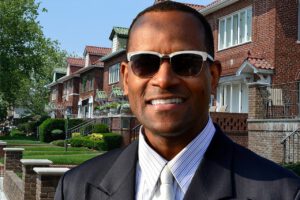 The oddity of today’s stock market is exactly what any God-fearing value manager should pray for. There are very few scenarios in the last 50 years that can be used to model or forecast what is currently going on. We are strong believers in Mark Twain’s saying that, “History never repeats itself, but it rhymes.” While you can’t precisely forecast the future, the rhymes of past eras can help provide a mental model to produce potential outcomes to help us as stock pickers. Our model for thinking about today’s circumstances is the inversion of what took place in 1972, matched against the opportunities available in 1974.

There is one thing that comes to mind for a stock investor when someone says the year 1972: The Nifty Fifty. In fact, for me personally, it brings up a particular day: my birthday. December 11, 1972 is noted as the peak of the Nifty Fifty (luckily, I wasn’t born for another 11 years). The Nifty Fifty lives in infamy for many stock investors. Dr. Jeremy Siegel wrote and provided wonderful data around the circumstances of that era is his book, Stocks for the Long Run. He shows simply that the Nifty Fifty was a truly great group of companies. As you think about the Nifty Fifty, you’d quickly recognize that it was an American phenomenon. It was the who’s who of American business: Phillip Morris, McDonald’s, Disney, Coca Cola, Avon and the list goes on.

As Siegel points out, these companies were incredibly expensive. He argues in his work that they were worth the price as they, despite their overvaluation on a price-to-earnings (P/E)-basis, almost beat the stock market over the next 25 years. While we agree with his wonderful data, we disagree with how investors experienced this, because investors never made it through the valley. The Nifty Fifty produced much higher earnings growth (40% more), but still lost to lower-earnings growth companies during the 25 years. They also gravitated to single digit price-to earnings multiples, just like the slower growth companies by the early 1980s.

Today’s bravado in stocks comes as a uniquely American experience like 1972. The U.S. is the only stock market that is waving its mega-cap tech flag in celebration. The rest of the world hasn’t produced this result. Further, add in American companies like Costco and Coca Cola to see this growth stock scenario as a summer barbeque with the red, white and blue flag waving in the background. Like in 1972, the problem is not that these aren’t great companies. The problem is their P/E ratios have out-kicked their coverage and could spend decades trying to produce the earnings growth needed to beat the stock market in total return, like Siegel noted they eventually “almost” did.

The bottom of 1974 was a nasty time for stocks, the economy and politics. The bear market in stocks of 1969 and 1973-1974 decimated retail investor enthusiasm. After the break in the Nifty Fifty, it was all downhill on the stock charts. There was very little room for discernment between good or bad businesses as all stocks got crushed. Throw in an oil embargo in late 1973 and you had a geo-political crisis of epic proportions. The stock market bottomed on October 3, 1974. By then everything was cheap, but the smaller companies were the cheapest.

Below is a chart looking back 50 years. It shows forecasted returns of small versus large cap stocks, provided to us by Cypress Capital. 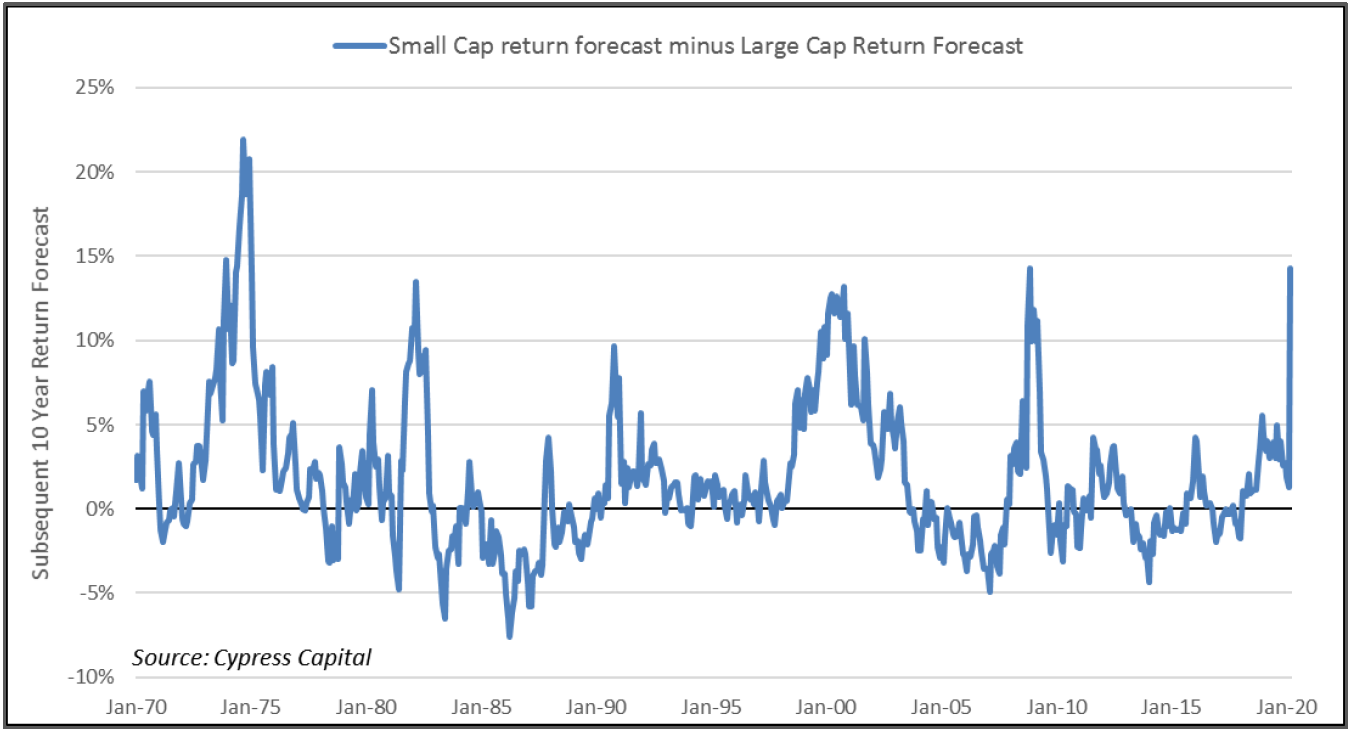 As investors can see, the bottom in 1974 produced the largest forecasted return spread between small-cap stocks and large-cap stocks. To explain this, smaller companies were not what investors applauded in 1972 by the time the stock market and the economy rolled over. Due to the oil embargo and gas rationing that followed, these companies had been affected in the capital markets and in their operating businesses. Throw into the mix the Watergate scandal causing the President of the United States to resign in disgrace. It was a terrible time for the American economy and for business. Inflation was picking up steam from the late 1960s and rising oil prices exacerbated that inflation.

Jason Zweig, who’s been around long enough to see a thing or two, noted the inversion we saw in 1972 and 1974, similar to the chasm stocks have today.

It isn’t unusual for the stock market to split into a few extreme winners and lots of losers. In 1973, a few darlings rose to near-record valuations while most stocks fell miserably. In 1999, technology shares shot up more than 80% even as many companies in the broader market languished and Warren Buffett’s Berkshire Hathaway Inc. fell 20%.

Seldom, however, has the gap between the haves and the have-nots been as wide as it is now.

Many of the Nifty Fifty stocks peaked prior to December 11, 1972, and many peaked after. The average stock was starved for capital due to the popularity of the Nifty Fifty and became emaciated in the bear market that followed. The decline of 1973-1974 produced the biggest spread in the chart above. This is why Cypress Capital’s chart was so endearing to us. Today is the fifth extreme in 50 years!

Ben Levisohn followed up Zweig with his piece in Barron’s on June 6, 2020 pushing the same hot button, with comments from Leuthold Group’s Jim Paulsen.

While the most-expensive stocks have gotten far more expensive—the average valuation has risen from 26.3 times to 38.3 times—the average for the remainder of the market hasn’t changed much. It’s 14.5 times versus 13.2 times. The takeaway: “The broad market is not overvalued,” Paulsen says.

Quality at any price is raining on high. It has pushed the S&P 500 Index back to its highs. Many stocks, particularly smaller-cap stocks (read: less than mega cap), provide wonderful probabilities for success over the next 10 years. Well-selected value stocks look attractive, but the S&P 500 Index does not. We will continue to ring the bell on this as investors are missing what is right under their nose.

Carol Loomis, in early 1973, wrote what may be her landmark piece titled, “How the Terrible Two-Tiered Market Came to Wall Street.” In the article she wrote:

One the one hand, the prices and price-earnings ratios of a few dozen institutional favorites—known as “the Vestal Virgins”—have fallen only moderately. In fact, some of these stocks, among them Eli Lilly (at about forty times estimated 1973 earnings) and Avon (at about fifty-two times), were recently selling very near their highest p-e ratios ever. In contrast, the great majority of stocks have sunk to level that suggest that they have become virtual pariahs. In the early months of this year, Wall Street was already talking about a “two-tier market” of remarkable proportions. By May stocks had seemed cheap at March prices had collapsed still further—many to levels of four or five times expected 1973 earnings—and the situation was being described as unique in stock-market history.

It helped the stock pickers of 1972-1974, like Warren Buffett and Bill Ruane, make great money in those prior circumstances. The “Vestal Virgins,” as Loomis noted, didn’t provide the 10-year returns that investors thought they would. We are excited for the future in 2020 because of what these circumstances have the potential to mean for us and our clients, not despite them, over the next 10 years.

The information contained in this missive represents Smead Capital Management’s opinions, and should not be construed as personalized or individualized investment advice and are subject to change. Past performance is no guarantee of future results. Cole Smead, CFA, President and Portfolio Manager, wrote this article. It should not be assumed that investing in any securities mentioned above will or will not be profitable. Portfolio composition is subject to change at any time and references to specific securities, industries and sectors in this letter are not recommendations to purchase or sell any particular security. Current and future portfolio holdings are subject to risk. In preparing this document, SCM has relied upon and assumed, without independent verification, the accuracy and completeness of all information available from public sources. A list of all recommendations made by Smead Capital Management within the past twelve-month period is available upon request.

This Missive and others are available at www.smeadcap.com.