The strong buyer demand heading into this crisis has held fairly steady in the months since the outbreak, as record-low mortgage rates and inventory levels have maintained competition in the markets and placed upward pressure on home prices. So much remains uncertain – including the longer-term path for home prices – but for now, competition for homes is holding strong and keeping prices afloat.

Annual growth in April as reported by Case-Shiller is expected to accelerate in the 10- and 20-city indices, and stay steady in the national index. S&P Dow Jones Indices is expected to release data for the April S&P CoreLogic Case-Shiller Indices on Tuesday, June 30.
emphasis added 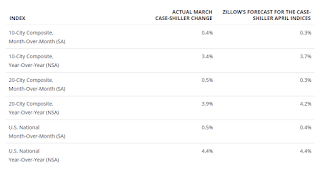 The Zillow forecast is for the year-over-year change for the Case-Shiller National index to be at 4.4% in April, the same as 4.4% in March.