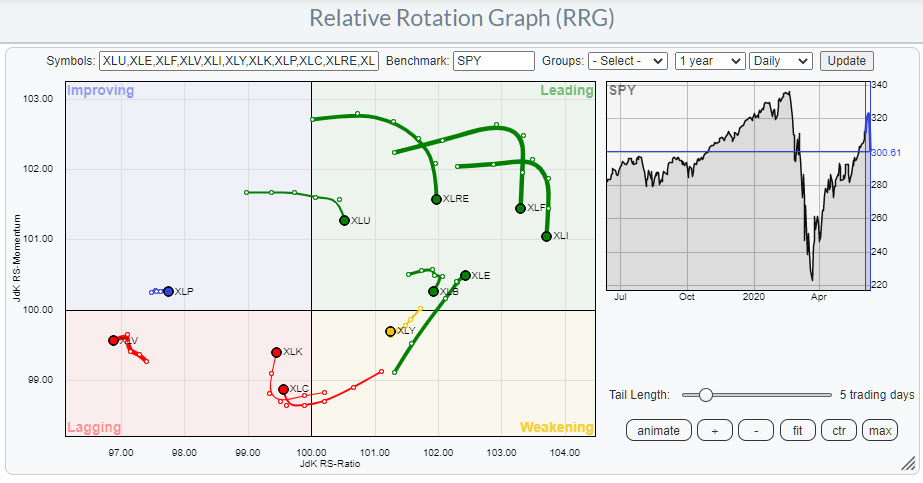 Yesterday’s (6/11/2020) big drop in the S&P did not cause any weird hooks or unexpected rotations on the Relative Rotation Graph.

If we start off in the leading quadrant we see that the tails for XLU, XLRE, XLF, XLI, and XLB had already started to roll over and loose relative momentum already a few days prior. Yesterday’s rapid decline is now causing an acceleration of that rotation.

XLE is the exception, as of yesterday’s close this sector is still travelling at a positive RRG-Heading but as it got hit hard I am expecting this tail to roll over shortly as well. The day to day distance on the XLE tail is minimal, indicating that there is very little power left. That small uptick is the result of the previous strong move which is still holding up that relative momentum for Energy.

XLY is the only sector inside the weakening quadrant and actually picked up a little bit of positive relative momentum. Of course this is primarily due to the fact that AMZN “only” lost 3.4% vs 5.9% for the S&P 500.

This up-tick for XLY (AMZN) fits with the rotations that we have seen recently, when things got shaky, and people started to flock to big-tech names. And it looks as if a similar rotation is starting to pick up again, at least for the near term.

XLK and XLC, both holding a few mega-cap companies, are inside the lagging quadrant but started to curl upward with XLK leading and XLC now starting to follow.

XLV, on the other hand, was and is still deep(er) inside lagging and turned back lower on the RS-Ratio scale thuis continuing its relative downtrend on the daily time-frame.

Finally we find XLP, traditionally a very defensive sector, inside the improving quadrant (daily RRG) but still far to the left and with a very short tail. This suggests a stable relative down trend.

How Does This Fit in With the Longer Term Rotation? 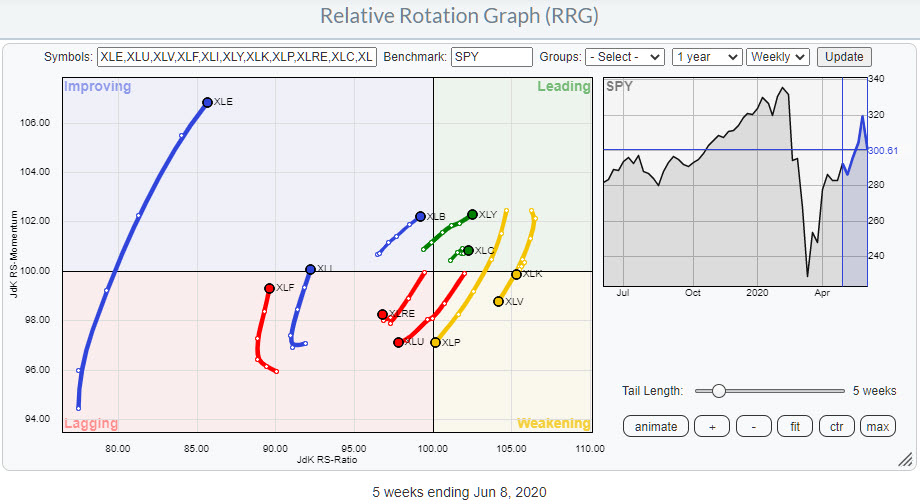 On the weekly RRG no significant changes in rotation are visible yet and with a sharp, sudden, decline like yesterday that is to be expected.

RRG tries to find and pick up relative trends in a universe so there must be a “trend” before something can be picked up. One move, even as it is as big and as sudden as yesterday will not change or turn around an existing trend.

Some trends that are “in play” on the weekly time frame. 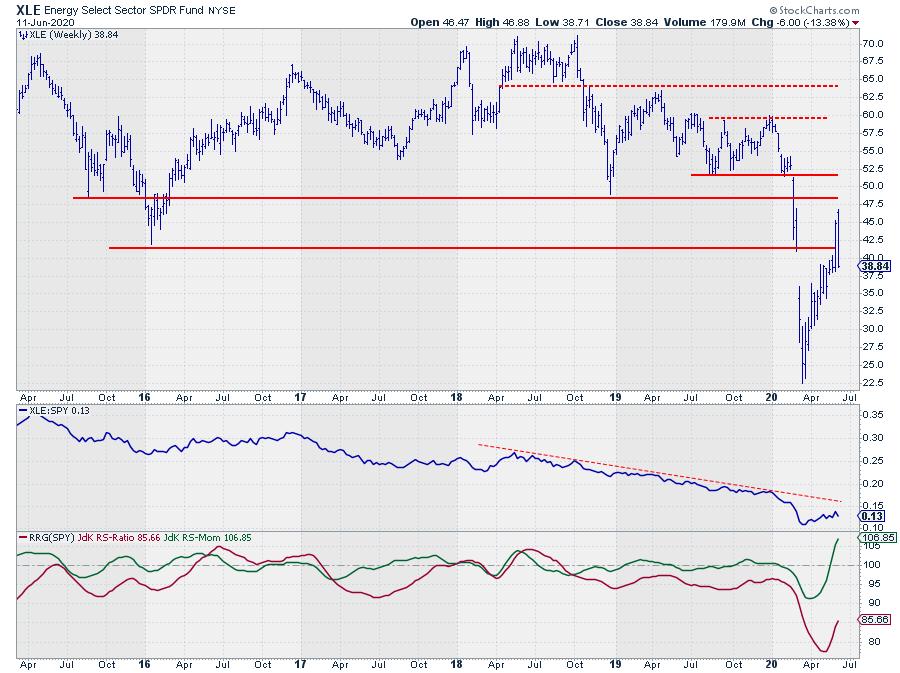 By far the longest tail on the RRG. The highest JdK RS-Momentum value but at the same time the lowest JdK RS-Ratio value. This reflects the very sharp rise that we have seen out of the March low but it looks as if the sector ran into overhead resistance on the rice chart and came down off those horizontal barriers.

As described above the daily tail for XLE reversed back into the leading quadrant again but is starting to lack upward momentum and likely to roll over again. I am looking for this weekly and daily rotation to get back in sync again which will very likely lead to a turn lower inside the improving quadrant, ie a continuation of the longer term relative downtrend in this sector. 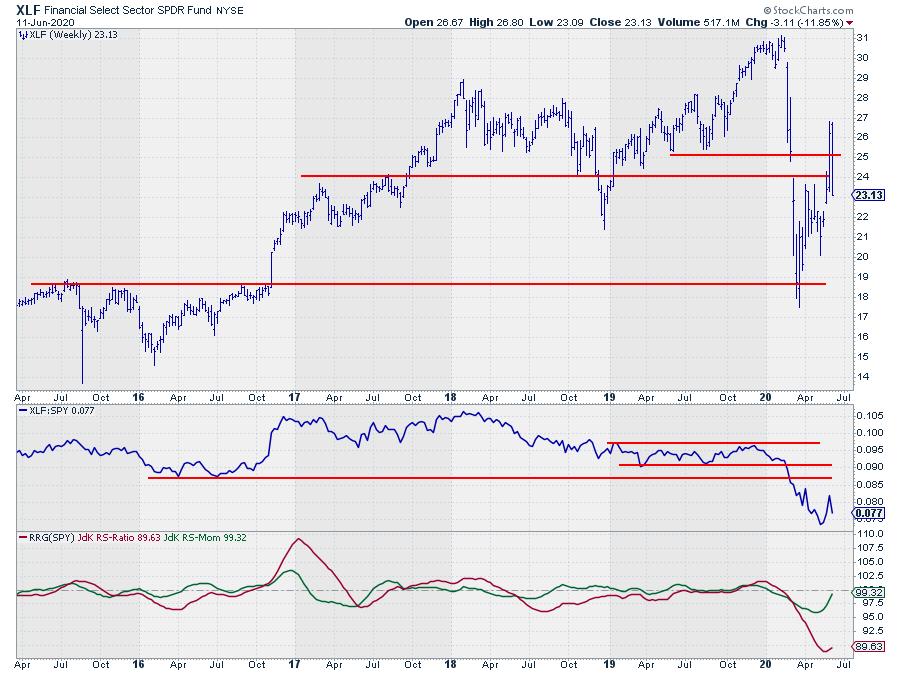 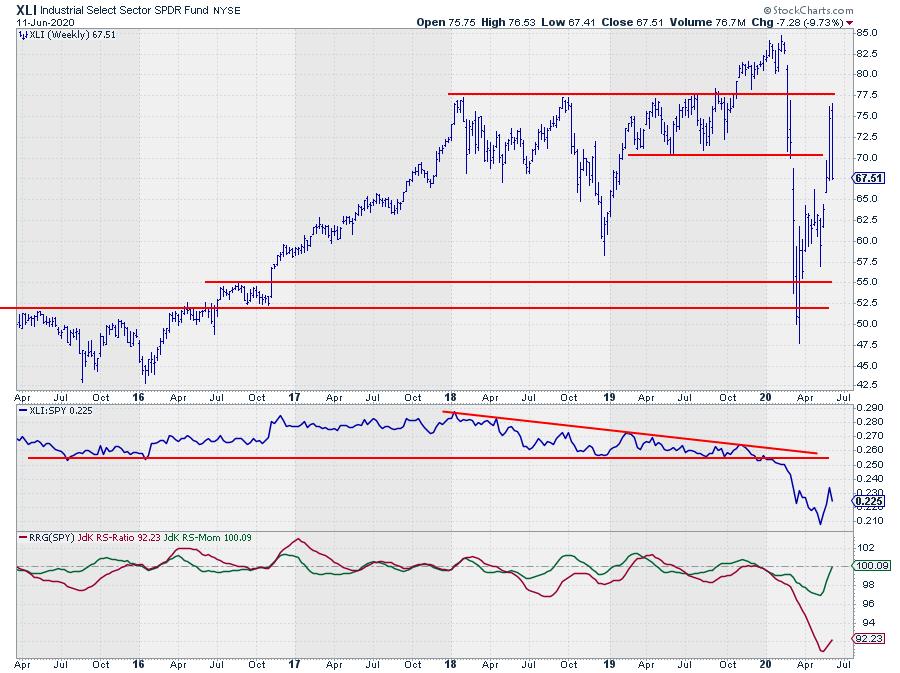 Both sectors are sharing a similar price chart and resulting tails on the daily and weekly RRGs.

On the weekly RRG the tails started to curl upward a few weeks ago while inside lagging. Despite that pick up in relative momentum they are still the second and third sector from the bottom and the gain on the RS-Ratio scale is very limited.

This uptick on the weekly RRG is seen on the daily as a full rotation through leading where both sectors are now starting to roll over.

Here also we need to find a new balance between weekly and daily rotation to see what the new dominant (relative) trend will be. With both sectors still far to the left and below 100 on the RS-Ratio scale we have to work under the assumption that they remain weak for now. 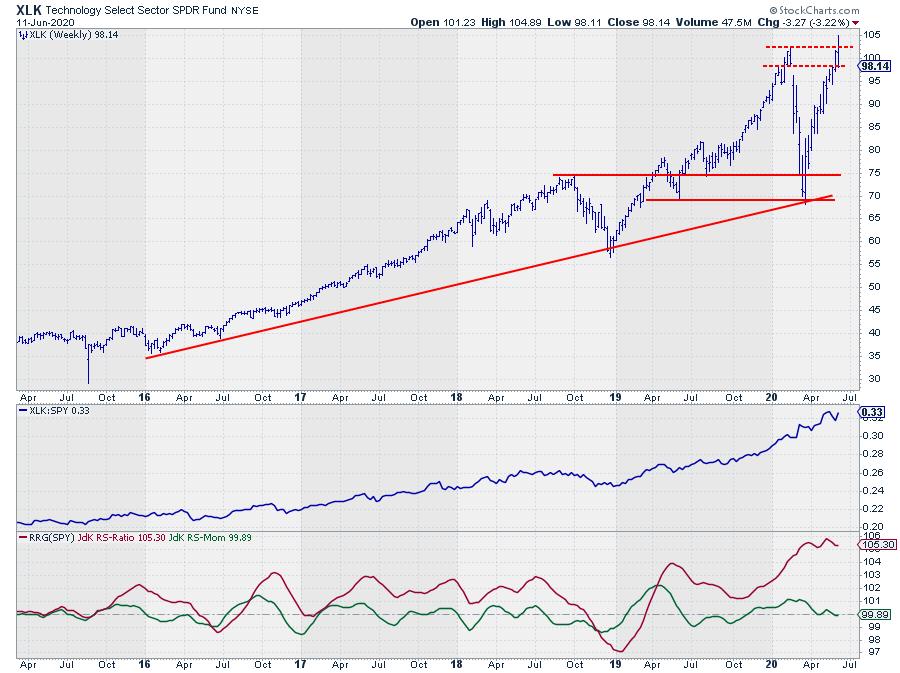 On the weekly RRG, technology is still the highest ranking sector on the RS-Ratio scale. Therefore the recent rotation lower from leading into weakening is seen as temporary and a pause in the existing relative uptrend.

This ties in well with the rotation on the daily RRG where the XLK tail is positioned inside the lagging quadrant but started to turn up this week. Keeping an eye on this tail to see it rotating further towards the leading quadrant on the daily RRG and then likely pulling the weekly tail around inside weakening and back up to leading again.

With XLK as the “new defensive sector” and a BETA below 1 !! the odds seem in favor of a rotation in favor of XLK over SPY in coming weeks.

Be careful a rotation to or inside leading does not necessarily mean a positive return for the sector. It shows an outperformance over the benchmark (SPY). 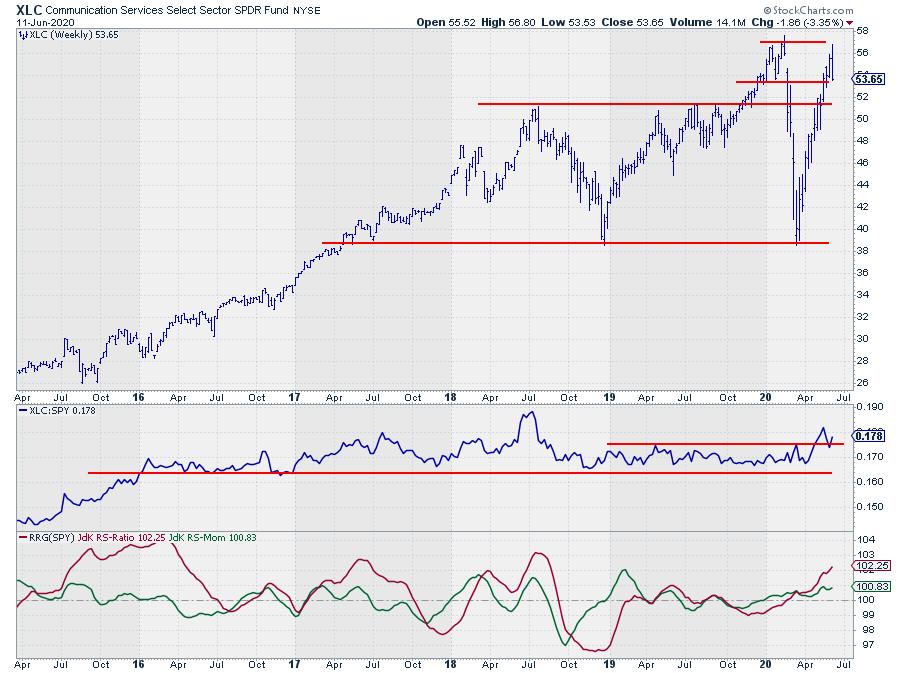 XLC is another sector to watch from a positive point of view. The tail is still inside leading on the weekly RRG at a very short tail, meaning stable.

What is interesting to see is that the relative strength line in the chart above broke out of that narrow range and now tested that former resistance level as support. If that support can hold, a further improvement for XLC and a rotation deeper into leading is in the cards.

The recent up-tick of the daily tail for XLC supports this scenario. 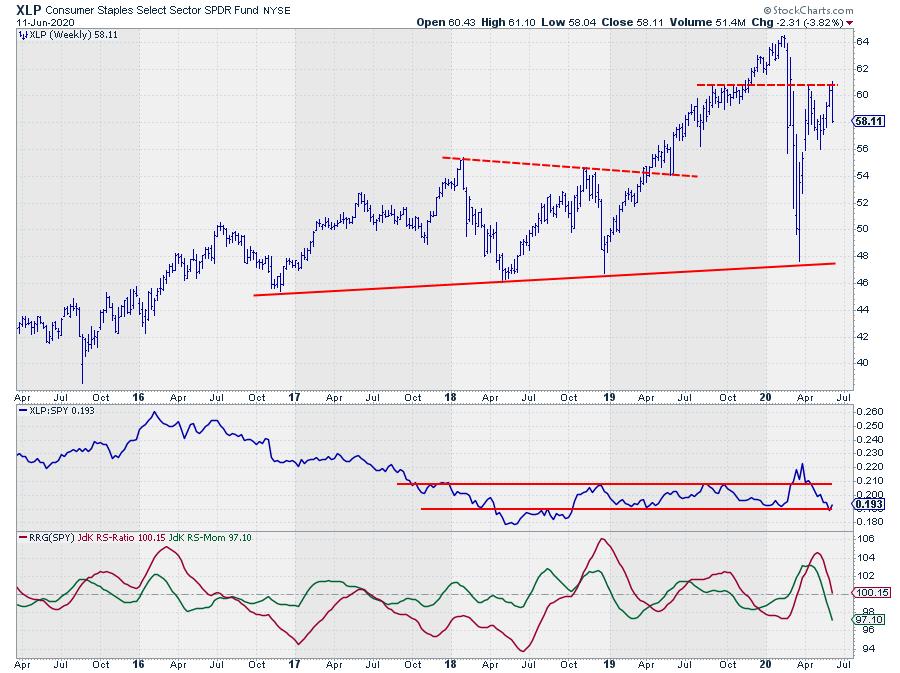 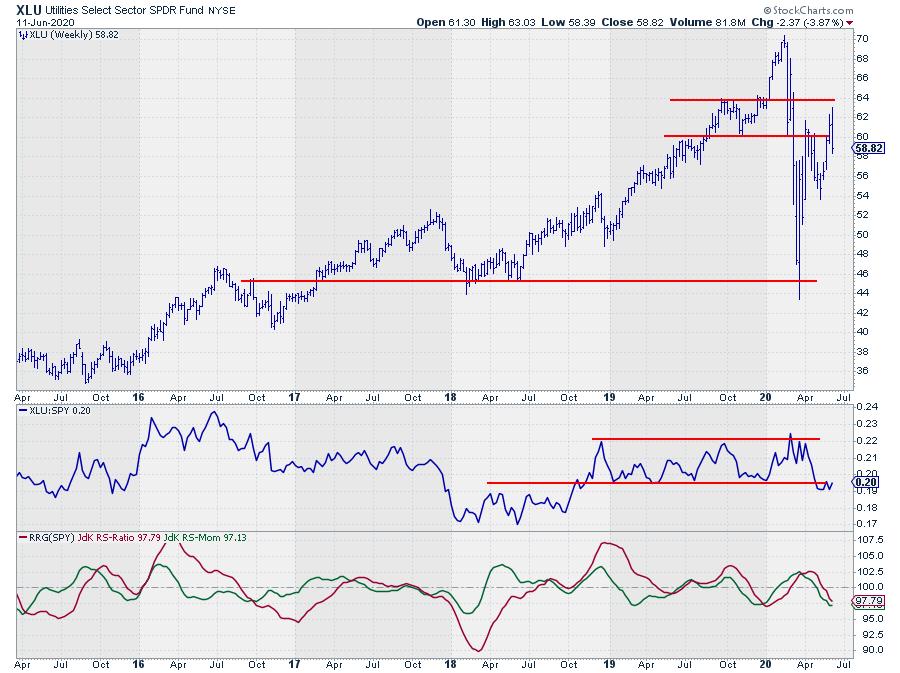 The defensive Staples and Utilities sectors are travelling at a negative RRG-Heading on the weekly chart and are likely to continue to do so.

the daily tail for XLP is far to the left, inside improving, at a very short tail which means that a turn can be made very easy. With the weekly tail heading clearly lower, a rotation down on the daily chart is more likely to bring the rotations on both time frames in sync.

On the price chart XLP found resistance at $ 61 and started to come down from that barrier while the RS-Line is threatening to break the lower boundary of its range.

The image for Utilities is slightly different as the daily XLU tail is inside improving but rolling over while the weekly tail is pushing further into the lagging quadrant.

Unless things are drastically going to change in the next few days the rotation and relative trend for Utilities remains negative. A further rolling over of the daily XLU tail inside the leading quadrant will push the weekly tail deeper into lagging.