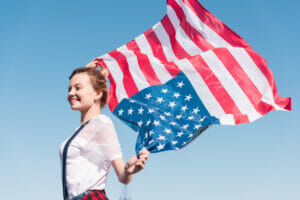 While Thanksgiving’s over, I wanted to write a short note about what America means to me—an Irishman.

I grew up in the inner city of Dublin. It was a dank place. I remember my childhood as a black-and-white movie.

Murder and drug abuse were rampant. Some folks I knew growing up were thrown in prison (or the “big house” as my grandad called it.)

Getting rich? That only happened to folks in faraway lands. Millionaires were works of fiction in my neighborhood.

I took my first trip to New York City when I was 17.

The skyscrapers entranced me… I’ve never been more inspired than when I first stared up at the Empire State Building.

I wanted to be one of those Wall Street hotshots. So I started learning everything there was to know about finance and investing.

I dropped out of high school a year early. But that trip to the Big Apple had lit a fire in me. Fast forward a couple of years, and I was working at a multibillion-dollar financial institution halfway across the world.

Wall Street is great. But honestly, corporate life sucks. That’s why our publisher Dan Steinhart and I started RiskHedge with two laptops at a coffee shop in Vermont.

And I owe it all to America.

Most of the kids I grew up with never made it out. At best, they work some boring dead-end job. Now they “live for the weekend.”

America was my way out. To learn from the smartest people in the world… then to live abroad… and now, a way to make a living and support my family.

The US is still the only country on earth where you can be whatever you want… if you’re willing to work for it.

The Most Innovative And Resilient Country In The World

Every time I turn on the TV or open a newspaper, “experts” are bashing the country. We’re told the US is falling apart at the seams. That Americans are a bunch of lazy selfish racists.

This is just plain wrong. Having lived on four continents, I can tell you America is the most innovative, resilient, and welcoming place on earth.

As an outsider, it’s still the beacon of freedom and prosperity for the rest of the world.

Or that most of the greatest inventions of the 20th century—including the internet, airplanes, computer chips, TV, nuclear power, and refrigerators—were pioneered by Americans.

Here in Europe, wealth-creating machines like Google, Microsoft, and Amazon couldn’t have existed. We’d have regulated these so-called “monopolies” out of existence.

Nowhere is perfect. But America is still by far the best country on earth if you’re willing to put your head down and work hard—by far.

That’s why the world’s best entrepreneurs still flock to the U-S-A.

Nowhere else in the world can millions of people go from “poor” to “rich” by simply working hard.

It’s sad how many take the American way of life for granted. They’re like spoiled children: They don’t know how good they have it.

As an Irishman, America holds a special place in my heart. I want to thank America for all the opportunities it’s given me and my family.

3 Breakthrough Stocks Set to Double Your Money in 2022

Get our latest report where we reveal our three favorite stocks that can hand you 100% gains as they disrupt whole industries. Get your free copy here.