This does not include the 2,226,921 initial claims for Pandemic Unemployment Assistance (PUA). 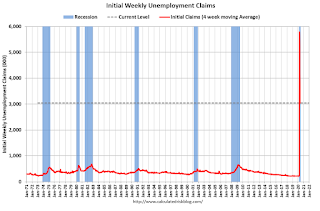 The dashed line on the graph is the current 4-week average. The four-week average of weekly unemployment claims decreased to 3,042,000.

This was close to the consensus forecast of 2.5 million. 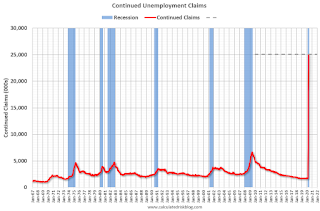 Continued claims have already increased to a new record high of 25,073,000 (SA) and will increase further over the next couple of weeks – and likely stay at a high level until the crisis abates.

Note: There are an additional 6,121,221 receiving Pandemic Unemployment Assistance (PUA). This is a special program for business owners, self-employed, independent contractors or gig workers not receiving other unemployment insurance.