Markets ended a week which continued to remain much on the expected lines, except that the volatility was much less than what was expected. Also, the markets continued to display lack of directional bias throughout the week. Despite making a sharply lower top and lower bottom for this week, the trading range also remained less wide than anticipated. The NIFTY oscillated in 371-points range over the last five days. While not taking any significantly decisive directional bias, it continued with the modest down-tick as the headline Index ended with a modest loss of 97.60 points (-1.07%) on a weekly basis. 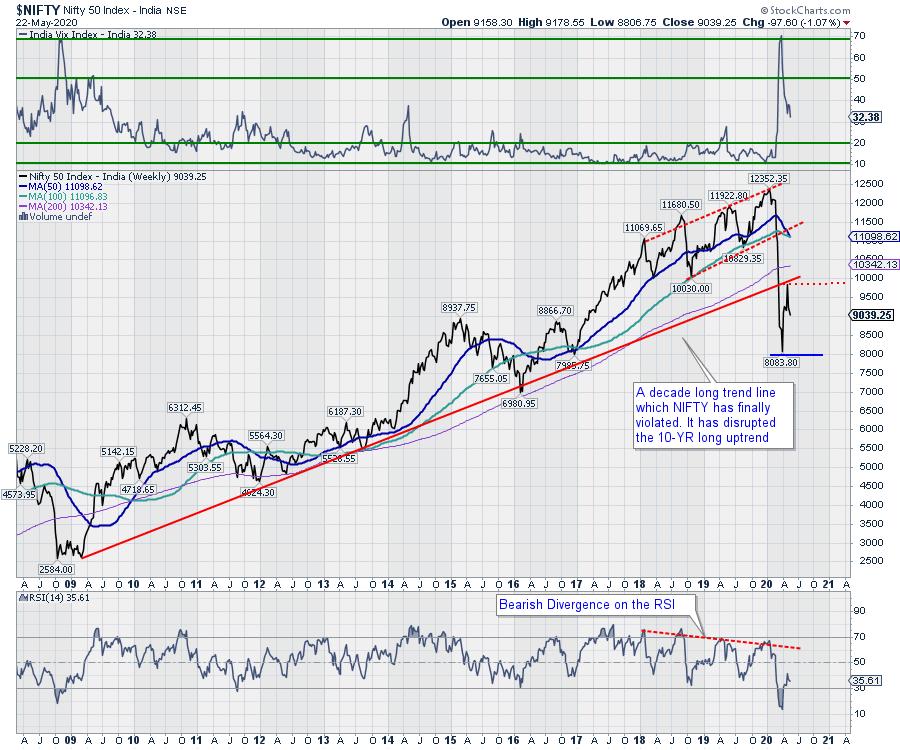 The coming week will be a short and truncated one as the Monday is a trading holiday for observance of Ramzan Id. Markets are expected to continue to exhibit tentative to bearish bias, and are unlikely to show any significant upsides from the current levels. Along with the decline in the NIFTY on a weekly basis, the volatility too declined. The India Volatility Index, INDIAVIX, came off by 14.84% to 32.38; this continues to remain a matter of concern as VIX and the Index are usually inversely related.

The Indian markets will open on Tuesday, and as they open, they will adjust to a global trade setup that will transpire on Monday. However, in any case, no significantly wild opening on the higher side is expected. The coming week will see the levels of 9162 and 9235 acting as overhead resistance points. The supports will come in at 8965 and 8800 levels. Any move on the downside is likely to make the trading range wider than usual.

The weekly RSI is 35.61; it stays neutral and does not show any divergence against the price. The pattern analysis of the indicator shows that it has not been able to penetrate the support line of a pattern which is violated a couple of weeks back. The weekly MACD is bearish; it trades below its signal line. A candle with a long lower shadow appeared on the candles. This makes a case for some resistance on the downside which makes the previous week’s low a particularly important level to watch. In the present technical setup, it may not result into any significant pullback from the current levels.

The pattern analysis reiterates the earlier setup on the weekly charts. The NIFTY has violated the 11-yr long upward rising trend line. While pulling back, it has resisted to the same trend line, and has formed a lower top near 9850 levels.

The review of Relative Rotation Graphs (RRG) shows that the IT sector has consolidated again after a minor blip a week before and keeps its relative momentum intact while staying in the leading quadrant. Along with that, the Pharma, FMCG, Consumption, Energy and Infrastructure remain comfortably placed in the leading quadrant. The Pharma, which stays at a maximum distance from the Centre point, is likely to generate maximum alpha over the benchmark NIFTY 500 Index. Collectively, these sectors are likely to outperform the broader markets on a relative basis.

The key sectors that continue to lag the broader markets include Financial Services, Services sector, Realty, PSU Banks and the Bank NIFTY indexes. Though some selling exhaustion may be observed at few places, broadly speaking, they will relatively under-perform the broader markets in the coming week.