After a strong gain of 5.86% in the week before this one, the NIFTY took a breather after rising nearly 1000 points over the past couple of days following a strong liquidity gush fueled by global risk-on environment. The past couple of days stayed volatile, especially the last trading session of the week which saw a gap down opening with the Index making up for all the gains. The markets oscillated once again in a wide 784-point range; the headline Index ended with a net loss of 169.25 points (-1.67%) on a weekly basis. 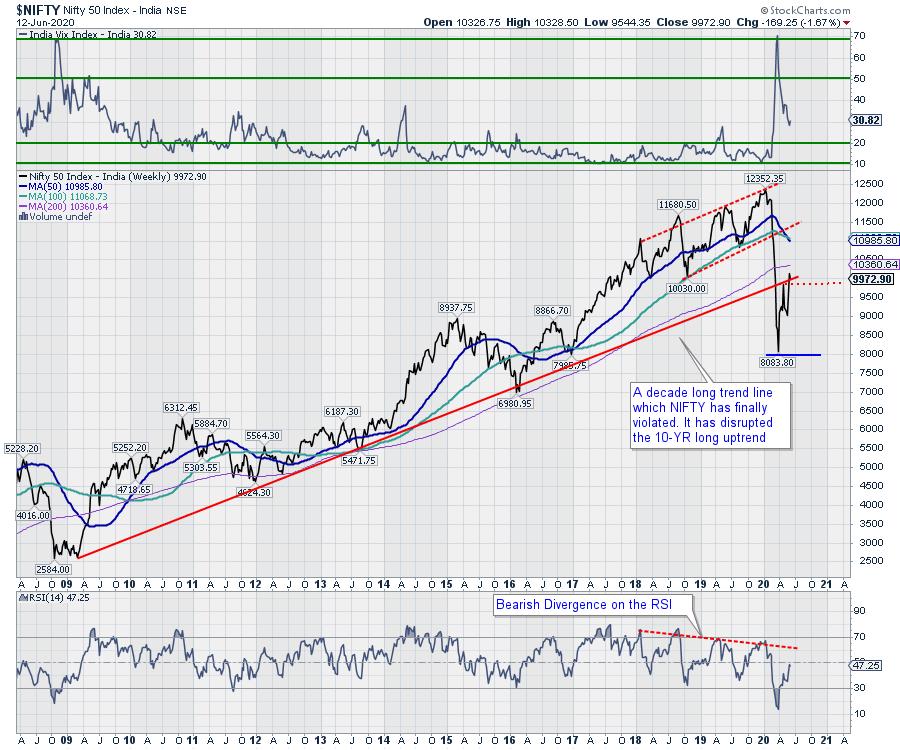 Coming week is expected to see a jittery start to the trade. The levels of 10090 and 10300 will act as resistance points. The supports will come in at 9830 and 9700. As mentioned, any corrective move will make the trading range wider-than-usual.

The weekly RSI is 47.25; it stays neutral and does not show any divergence against the price. The weekly MACD is bullish and it trades above its signal line. A black body occurred on the candles. With the black body appearing on the wide-range candle just below the resistance point, it reinforces the 100-Week MA as an important resistance over the near term.

The pattern analysis shows that the NIFTY has managed to mildly penetrate the decade-long rising trend line marginally. However, it would be important to stay above that and move past important resistance point to confirm this penetration as the internals of the markets have remained weaker than required.

The surge that we witnessed over the past couple of days should never be mistaken as a new bull market phase. What we saw was a massive short squeeze happening when the markets got oversold following the sharp declines. Also, it should be noted that bear market rallies tend to remain very sharp and equally deceptive. We reiterate approaching the markets with caution and use all future upsides to make less of new purchases and more for protecting profits at higher levels as the markets are not yet completely out of the woods. A selective approach with vigilant protection of profits at higher levels is advised for the coming week.

The review of Relative Rotation Graphs (RRG) presents some concerning developments. On one hand, there are few sectors that were leading appear to have topped out. On the other hand, there are a few sectors which are yet to bottom out. The Pharma Index remains in the leading quadrant along with the Energy group. However, both Indexes are heading lower while giving up on their relative momentum.

The Auto Index, along with Media and Metal groups is in improving quadrant. They are heading north-east, and therefore, appear to be rotating favorably while steadily building up on their relative momentum. Metal appears to be the case of worry as it is rotating sharply back towards the lagging quadrant.

Other key Indexes like Banknifty, PSU Bank and Financial Services, Services Sector and Realty Indexes have managed to halt their declines. They are improving on the relative momentum, but still remain in the lagging quadrant and they do not appear to have bottomed out completely.