I don’t have to tell you that these markets have been tough.

Last week was particularly trying, as we were seeing signs of a downtrend reversal before Thursday’s high inflation report, coupled with heightened tensions between Russia and Ukraine, pushed the markets back into a downtrend, The headfake reversal came with increased volatility and it’s enough to drive an investor to drink. Or to tobacco. Heck, even gambling at a casino sounds like a good idea about now.

In all seriousness, stocks from these areas have a history of performing well during tough market environments. The Dow Jones Gambling Index gained 63% during the first year of the Tech bubble burst in 2000, while the Dow Jones Tobacco Index gained 145% that year. Brewers gained 75% in 2000, with the stock we’re highlighting today from this group gaining even more. 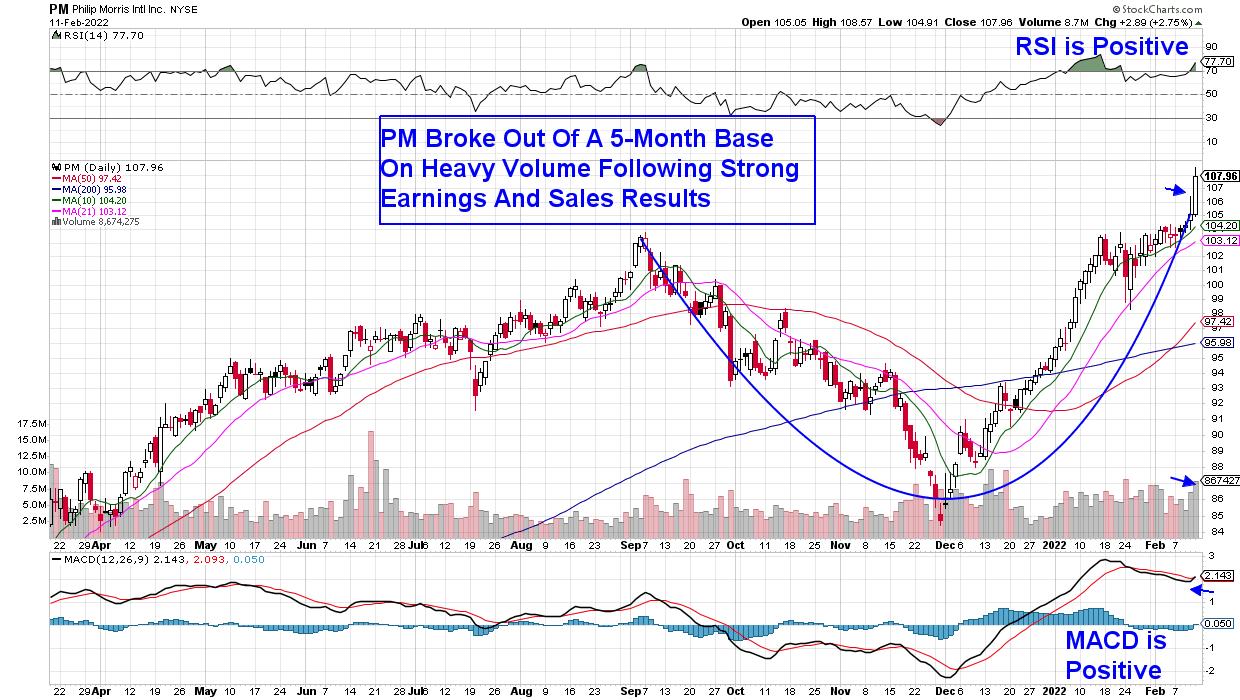 Let’s take a look at a well-known Tobacco company, Phillip Morris (PM). The company has seen growth in emerging markets, which has countered a slowdown in the U.S. and Europe. The real future for the company, however, is their heated tobacco system, which the company claims is much less harmful than traditional cigarettes. Sales of this product have surged and, yesterday, PM broke out of a 5-month base on volume after reporting strong 4th quarter results, with management guiding higher for earnings this year.

Tobacco stocks are often viewed as being protected against inflation, given the sector’s strong pricing power and ability to raise prices. Phillip Morris’s 4.9%-yield is a bonus as well, as higher-yielding stocks are known to outperform during periods of rising interest rates. 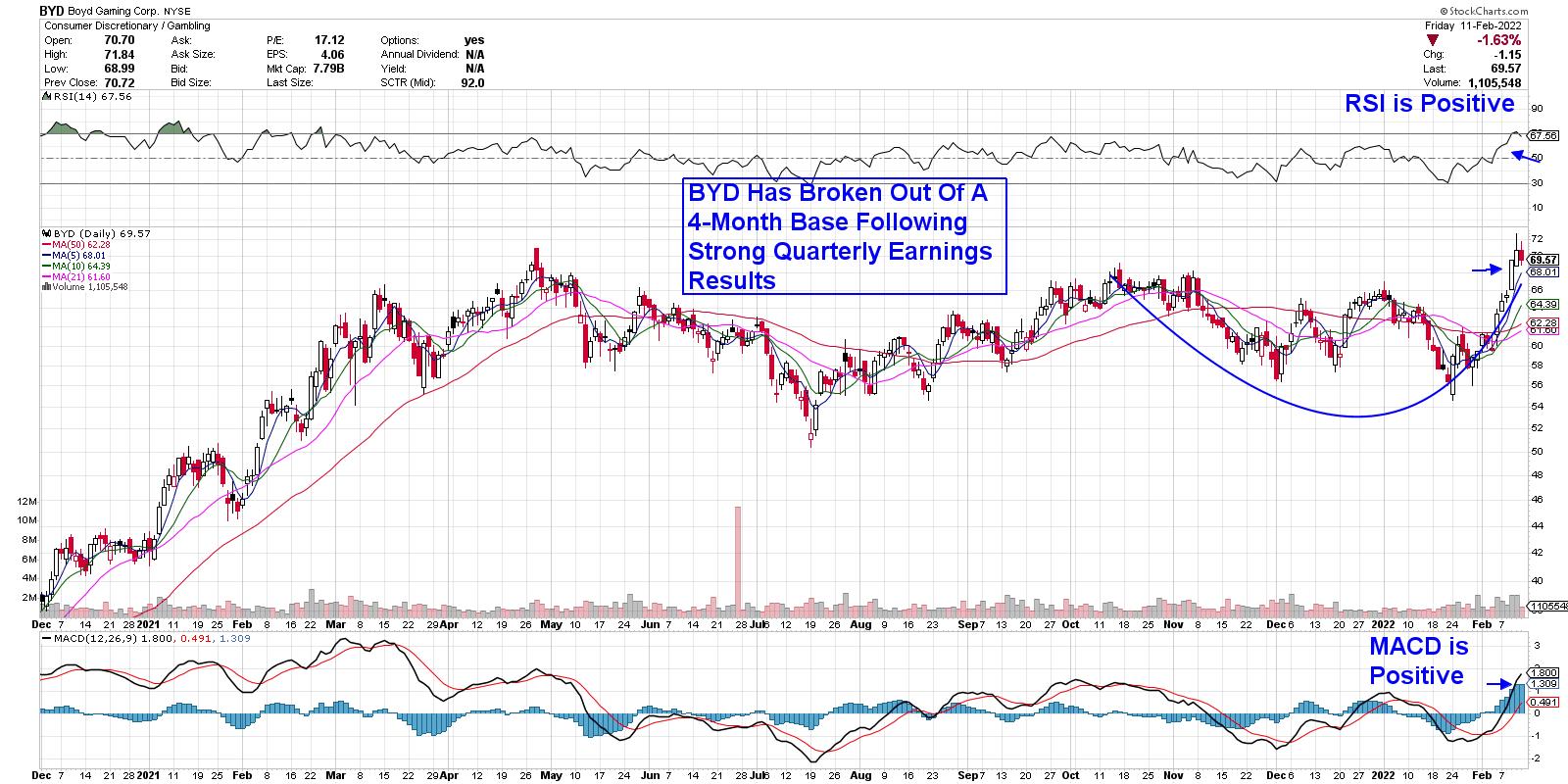 Among Gambling companies, Boyd (BYD) has been trending higher following the release of 4th-quarter results earlier this month. The company came in with earnings that were 193% above last year, as easing COVID-related restrictions have brought operations back to full capacity.

The news pushed BYD into an uptrend on above-average volume, which helped push the stock out of a 4-month base. The stock can be bought on a pullback to its 5-day moving average, as its positive RSI and MACD point to further near-term upside. 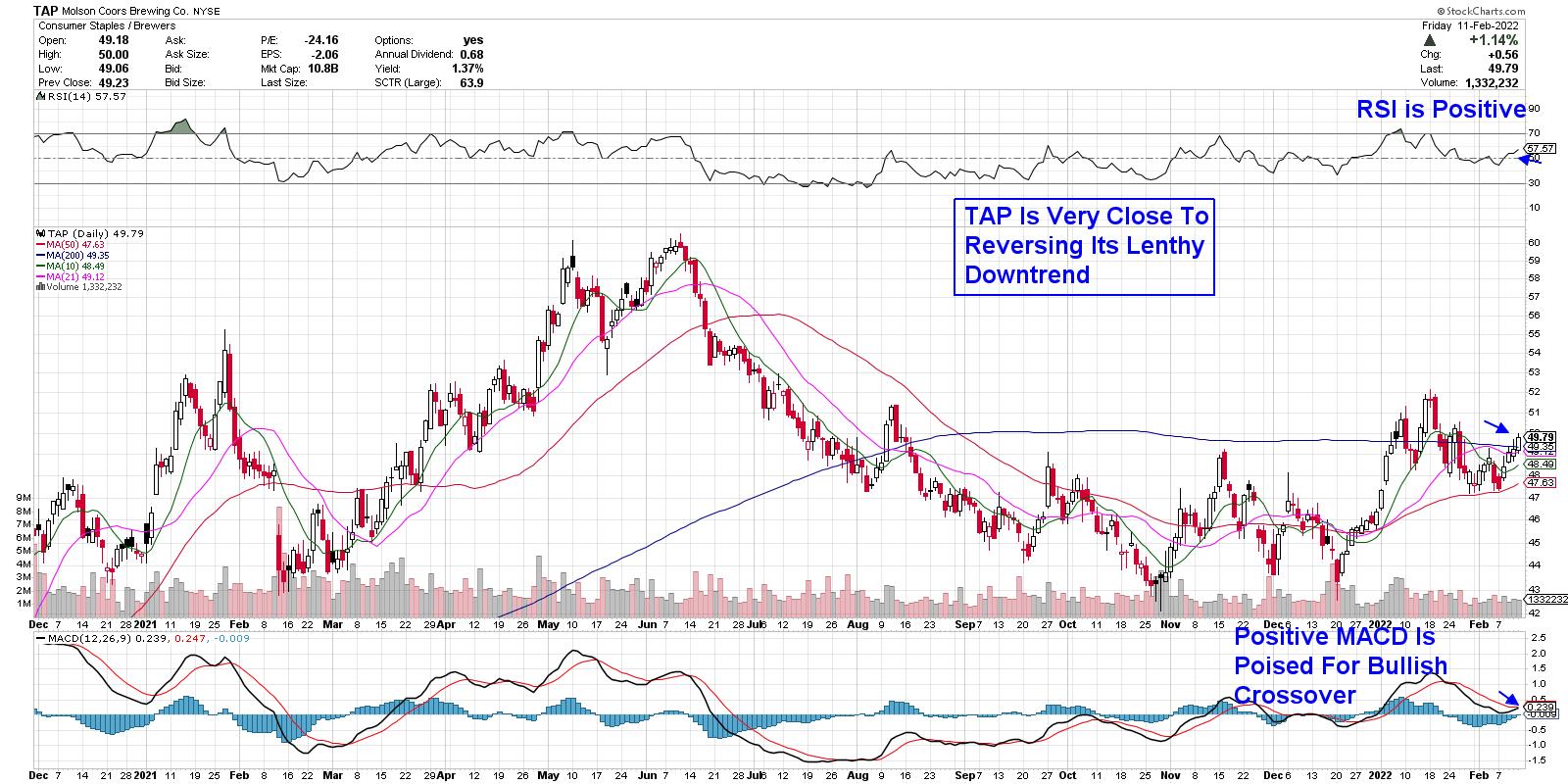 Last up is beer manufacturer Molson Coors (TAP), which is in the throes of attempting to reverse a lengthy downtrend; this has put the stock at a P/E of 13 times last year’s earnings. The company has ventured into the metaverse with their Meta Lite Bar, just in time for the Super Bowl. TAP announced a new venture with Coca-Cola (KOLA) in late January, where they’ll be launching spiked juices under the Simply brand. The Simply brand is Coca Cola’s 2nd largest in terms of revenue and the partnership should help boost Molson’s bottom line down the road.

TAP would need to move further above its 200-day moving average on volume before reversing its downtrend. The 2.7%-yielder already has a positive RSI and MACD, with a bullish crossover taking place.

As mentioned, the markets have been tough, and the currently high volatility is expected to be with us for a while as the Federal Reserve — and investors — will be focused on every economic data report in the coming months. It’s a very uncertain period and, if you’d like to be alerted to when the markets turn positive again, as well as other areas we expect to do well despite an ailing market, use this link here to trial my twice weekly MEM Edge Report for 4 weeks at a nominal fee.

Last year, this top-performing newsletter posted over 110 suggested holdings and 75% of them were winning stocks. Of the losing names, the average loss was 4%. Use this link here and you’ll gain immediate access to my most recent reports.

On this week’s edition of StockCharts TV’s The MEM Edge, I review where the markets are headed and which areas are poised to weather the increased volatility. I also share where to reduce your exposure as the Fed begins their interest rate hike cycle.