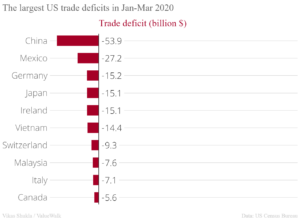 The United States is by far the biggest importer of goods in the world. But it doesn’t export as much as it imports. The result? The US runs massive trade deficits with over a dozen countries. According to data from the US Census Bureau, the country imported $2,498.5 billion worth of goods, but exported only $1,645.5 billion in goods in 2019. As a result, it incurred a trade deficit of $853 billion. Here we take a look at the top ten countries with which the US has the largest trade deficits.

The raging US-China trade tensions have brought the deficits into focus. China is one of the countries that export a lot to the US, but import very little. However, the trade volumes between the two countries dropped significantly in the first quarter of 2020 amid the COVID-19 pandemic. There are only a small number of countries with which the US enjoys a trade surplus.

We have to explore two different sets of data to understand the US trade deficits. We will be looking into data for the full-year 2019 and the January-March quarter of 2020. The coronavirus pandemic has disrupted international trade. So, we’ll get a fair picture if we look at both the Q1 2020 as well as the full-year 2019. The ranking is based on the data from the US Census Bureau. 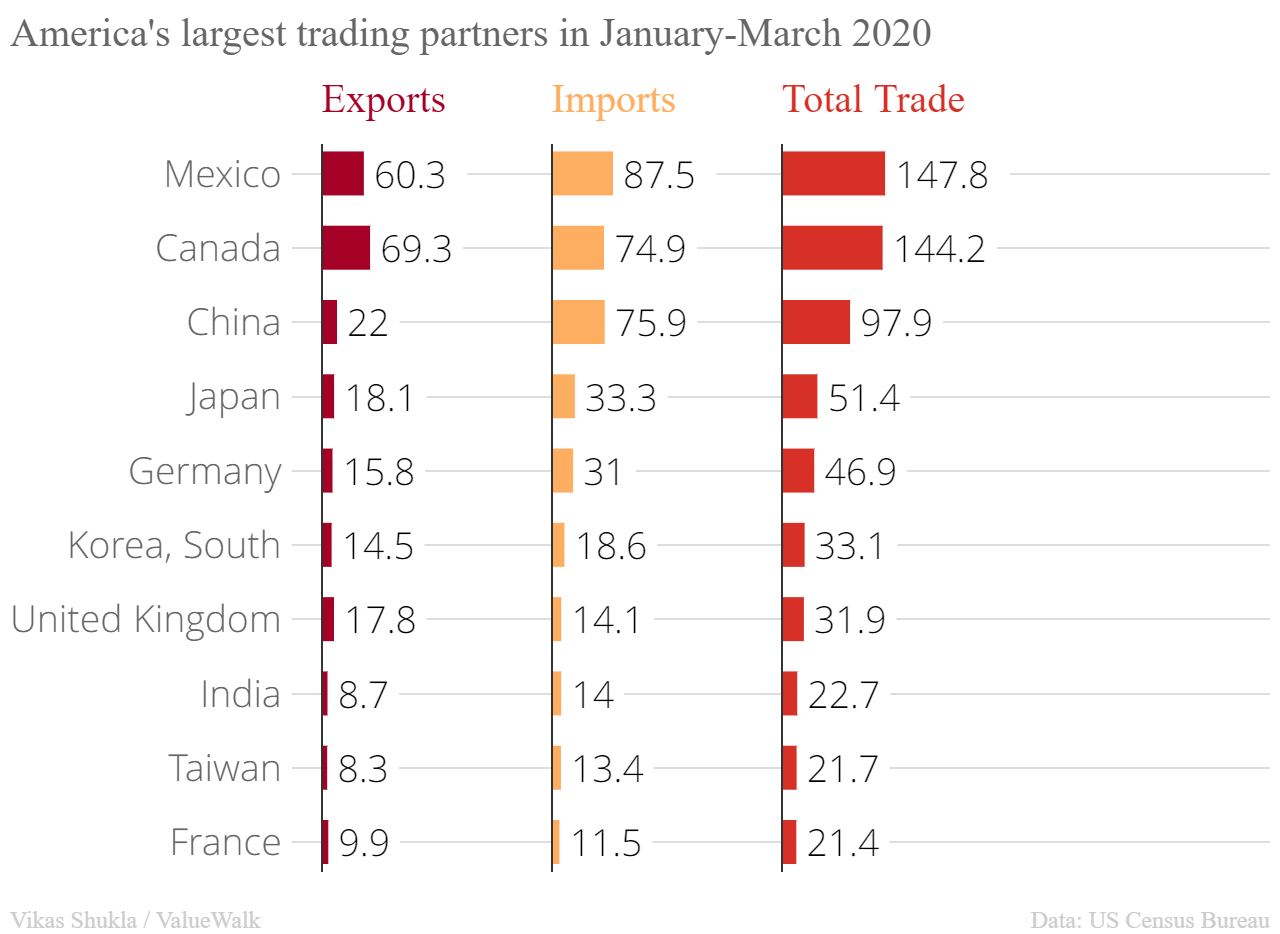 China occupied the third spot with $97.9 billion of total trade. The US exports to China dropped 14.7% during the quarter compared to the same period a year ago. The US imports from China plunged 30.1% YoY to $75.9 billion.

The decline in trade between the two of the world’s largest economies has made it difficult for Beijing to honor the initial trade deal, which pushed China to import more American goods. Under the “phase one” of the trade deal, China must buy $194 billion in US goods during 2020.

Now these were America’s largest trading partners in 2019. 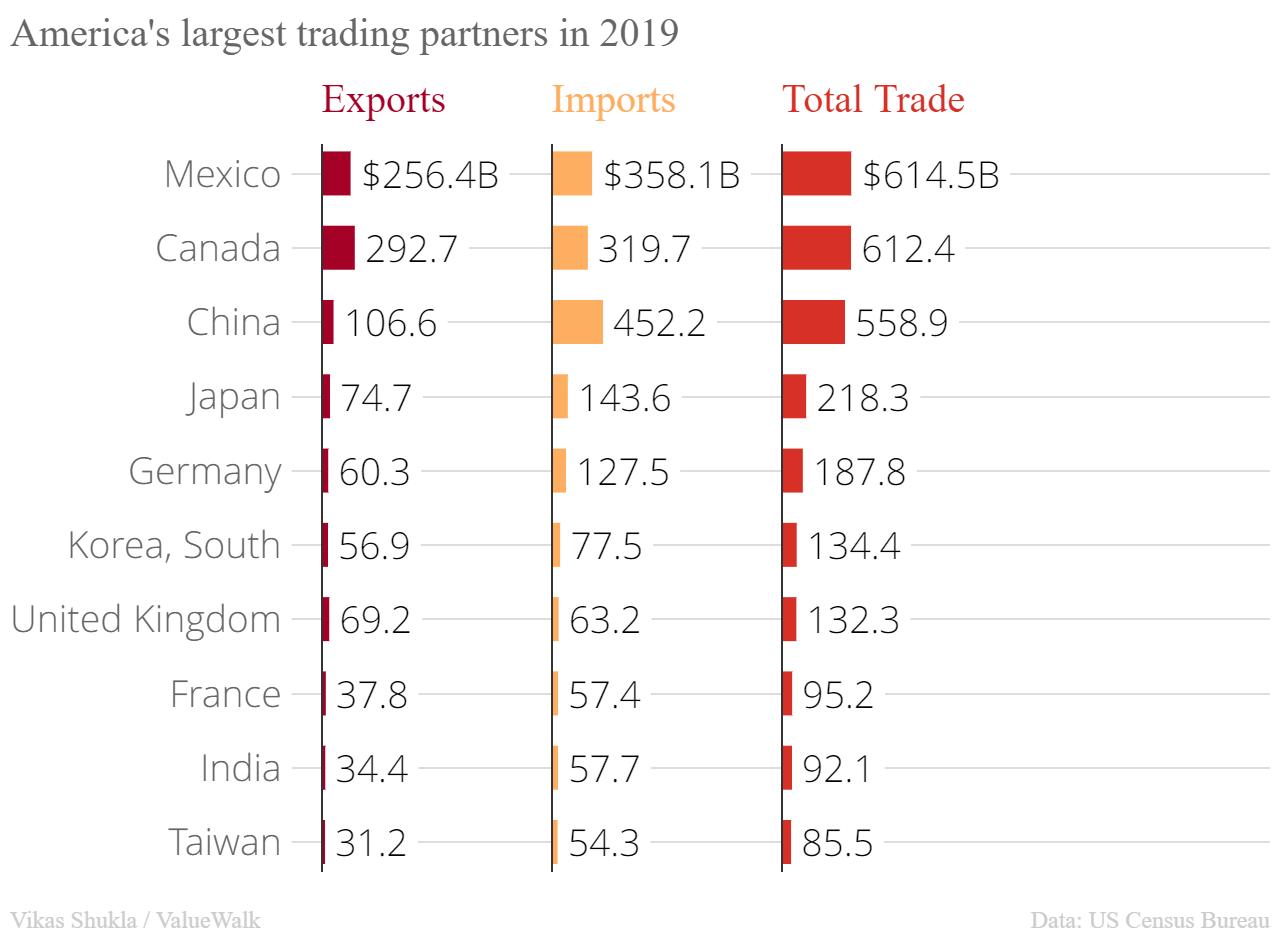 Mexico and Canada were the biggest trading partners in 2019. The US runs a trade deficit with both of them. Canada, Mexico, and the US are partners in the North American Free Trade Agreement.

China purchased only $106.6 billion in US goods last year. But the US imported a staggering $452.2 billion worth of Chinese goods. The only country on the list where the US exported more than it imported from was the United Kingdom. The US exports to the UK were $69.2 billion compared to imports of $63.2 billion.

Countries with which the US has the largest trade deficits 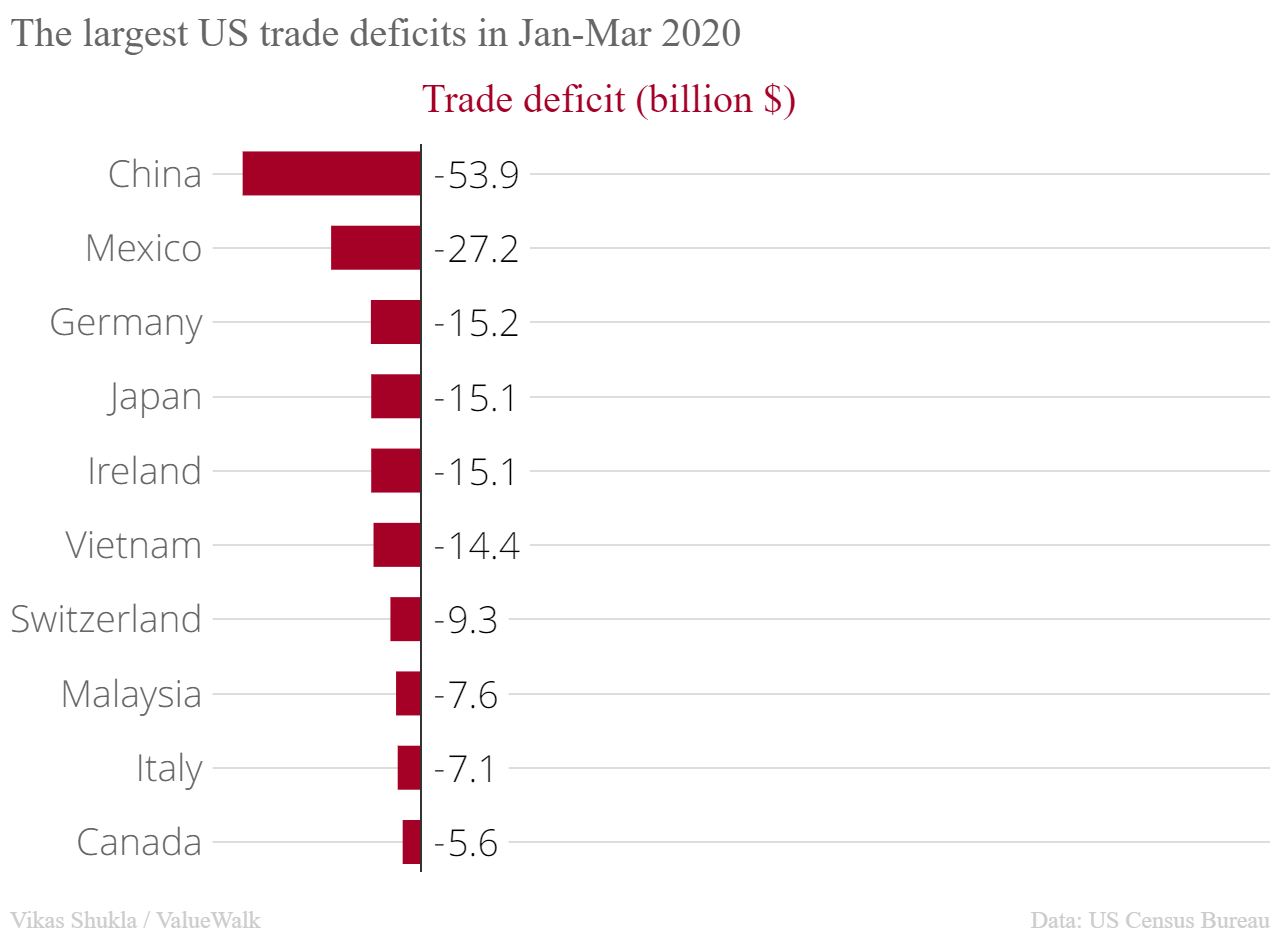 It’s no secret that the US runs a huge trade deficit with China. The US-China trade is heavily skewed in favor of Beijing, primarily because China is the world’s largest manufacturer of goods. Even American companies ship raw materials to get their products manufactured in China for cheap. And then they import the manufactured goods to the US.

The US trade deficit with Mexico was $27.2 billion in the first quarter of 2020. America also runs a steep deficit with Germany, Japan, Ireland, and Vietnam.

During 2019, America’s largest trade deficit was with China at $345.6 billion, up from just $18 billion in 1992. The US imports computers, electronics, telecom equipment, apparel, heavy machinery, chemicals, and other items from China. I dug into the US Census Bureau data all the way back to 1985, and found not one year when the US recorded a trade surplus with China. 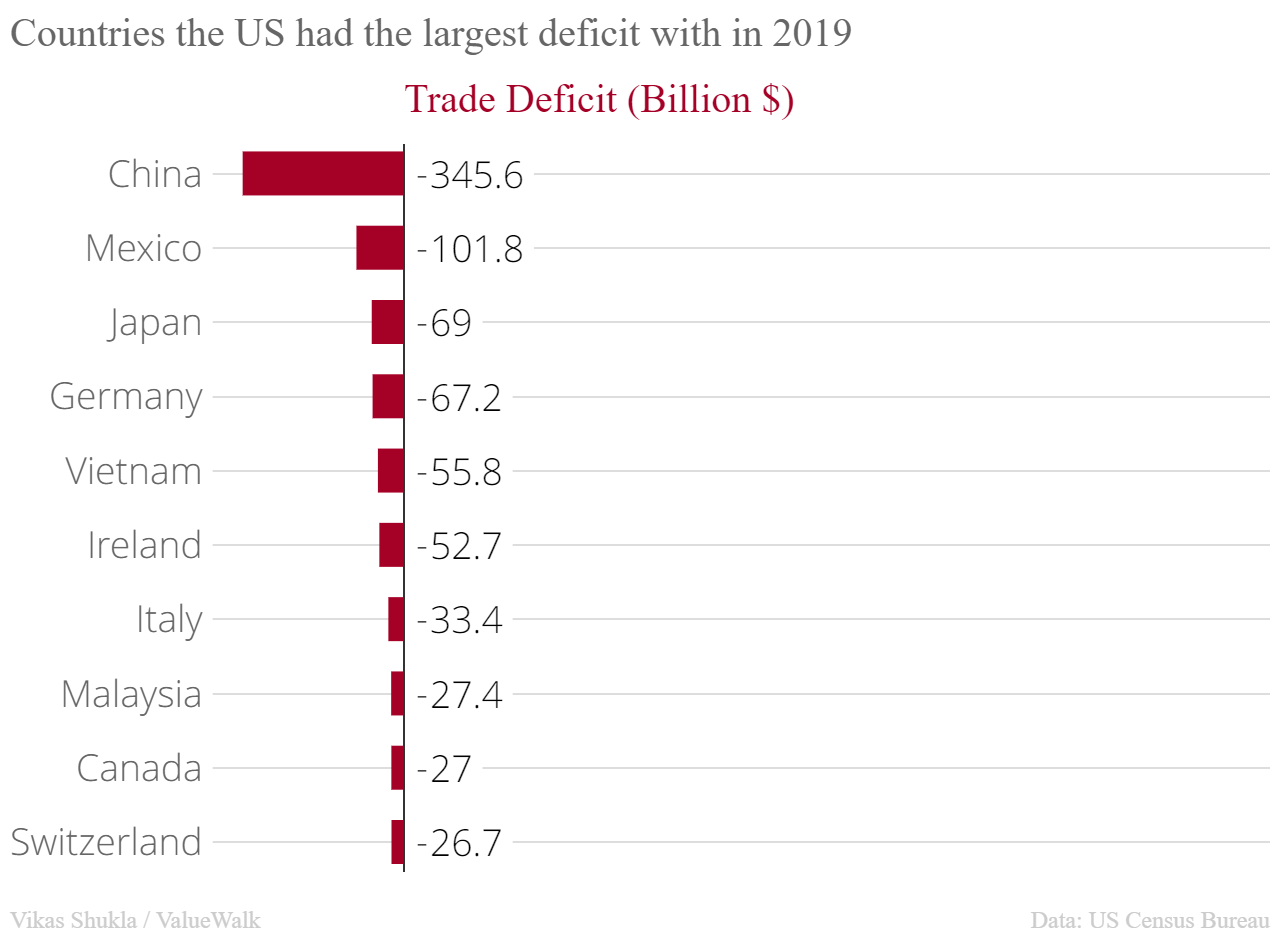 The US trade deficit with Mexico was $101.8 billion. Japan and Germany occupy the third and fourth spots, respectively. The US imports cars, automobile components, industrial machinery, and pharmaceuticals from both Japan and Germany.

Vietnam also runs a large trade surplus with the US. In fact, Vietnam and Taiwan have emerged some of the biggest winners in the US-China trade war. Hundreds of companies are relocating their manufacturing facilities from China to Vietnam or Taiwan to escape the US tariffs.

The post Top 10 countries the US has the largest trade deficits with appeared first on ValueWalk.