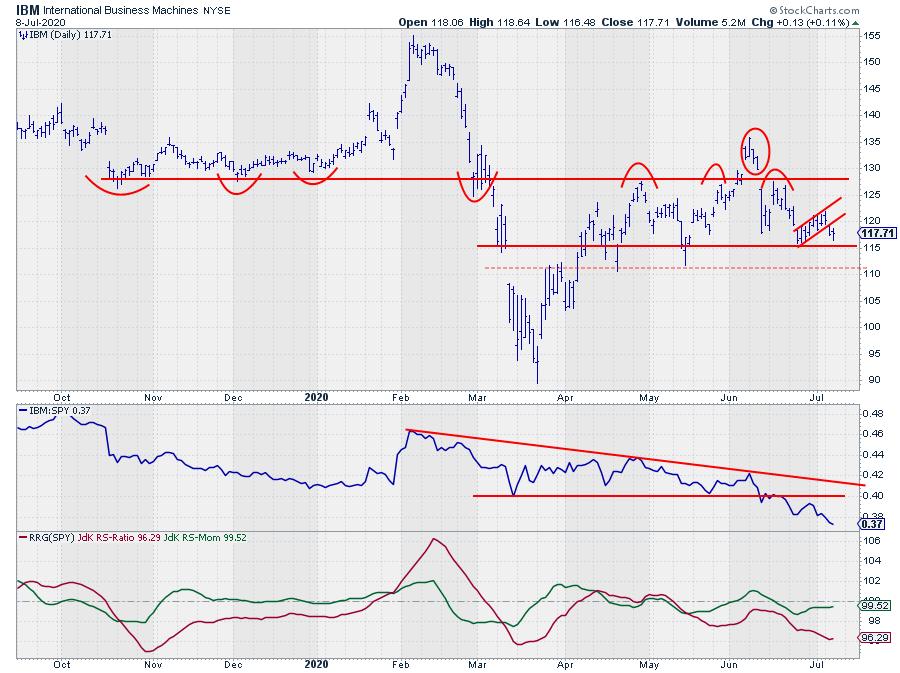 There is no doubt that the technology sector is still the strongest segment in the US stock market but in the near-term it is losing some of its relative momentum as you can see on the daily Relative Rotation Graph for US sectors.

One of the stocks in that sector with a really weak chart is IBM.

The daily chart above shows IBM since October last year. During Q4-2019 support showed up around $ 127.50 which was tested three times, followed by a rally at the start of 2020 until early February. That high was set well before Corona hit the markets.

In the decline support around $127.50 showed up once again and was able to stop the move for a few days but eventually had to give way to a further move lower that ended, for now, at the low in March around $93.

In the move out of that March low the old support area around $127.50 started to work as resistance. From 5-10 June it looked as if that hurdle was cleared but the gap down on 11 June caused a clear island formation on the daily chart and took IBM back below $127.50. That gap never got closed making the island stand out as a clear peak signalling weakness.

At the moment IBM is hovering just above support at $115 but the sequence of lower highs and lower lows is clearly visible. Below $115 the next support level (less important than $115 IMHO) is waiting.

Where price is still above support, relative strength clearly is not. The break below horizontal support in June pushed the RRG-Lines further down and caused the RS-Momentum line to drop back below a 100, this caused a rotation back to the lagging quadrant from improving which usually signals more weakness.

Watch out for a break below $115 as that will very likely be the catalyst for another acceleration lower.

My regular blog is the RRG Chartsblog. If you would like to receive a notification when a new article is published there, simply “Subscribe” with your email address.