The Greatest 50-Day Rally Ever

1) Following up on Tuesday’s e-mail on “why I’m steadily becoming more cautious,” I’d like to share more of the bull and bear cases for the market going forward…

We’re clearly in a bull market right now – in fact, by one measure, it’s the fastest, biggest bull market of all time. According to LPL Financial Research, the 39.6% gain in the S&P 500 Index in the past 50 days is the greatest 50-day rally ever, since “the modern design of the S&P 500 Index was first launched in 1957.”

As this table from LPL shows, the market has performed well after the previous seven biggest 50-day rallies – with positive returns in every case after six and 12 months:

2) Economic data are mixed, thus providing plenty of support for both the bull and bear cases.

The bears argue – correctly – that the economy is in terrible shape. The Atlanta Federal Reserve projects that second-quarter gross domestic product will decline 52.8%, as this chart from CNBC shows: 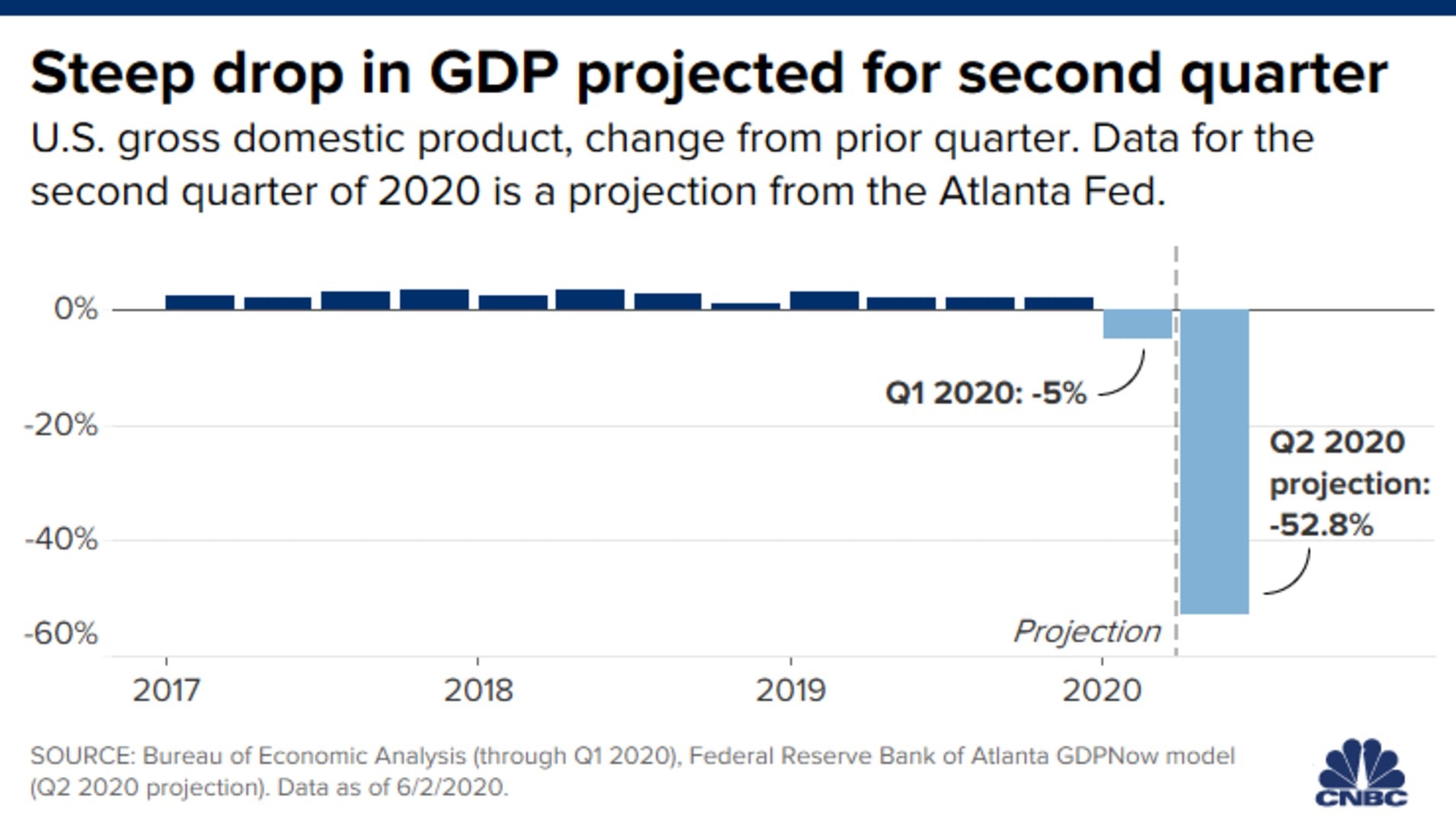 And more than 40 million people have applied for unemployment benefits during the pandemic, with roughly 21.5 million continuing to receive them.

Lastly, the Congressional Budget Office estimates that “fallout from the coronavirus pandemic will shrink the size of the U.S. economy by roughly $8 trillion over the next decade.”

Things Are Getting Better

3) In response, the bulls argue – also correctly – that things are getting better (or at least getting worse at a slower rate). Personal incomes rose 10.5% between March and April thanks to stimulus checks, and the latest Bloomberg Consumer Comfort Index, just out this morning, showed that:

Consumer sentiment improved this week for the first time since late December, with advances in Americans’ ratings of their personal finances and the buying climate reversing an historic plunge in the face of the coronavirus shutdown.

Here’s the accompanying chart from the report: 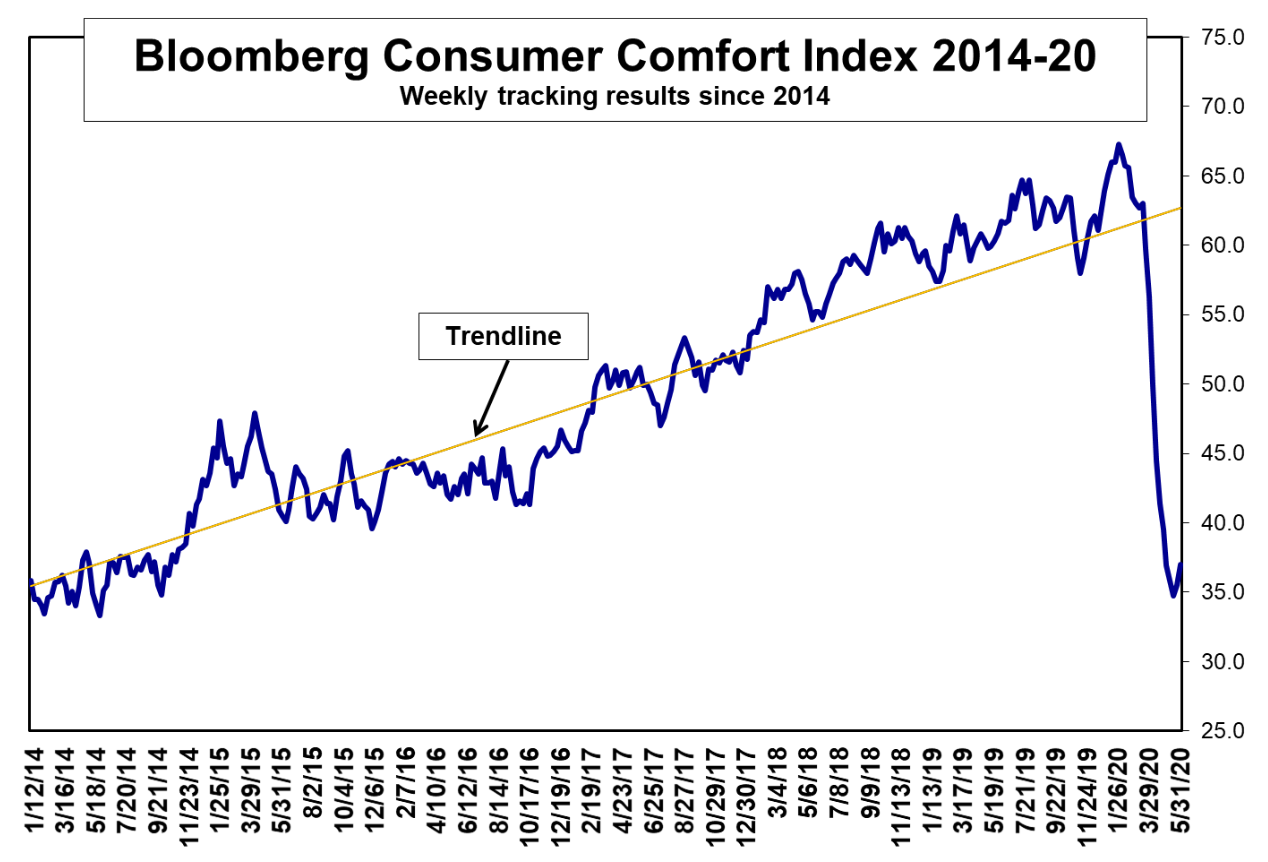 As this Wall Street Journal article notes, the Institute for Supply Management’s nonmanufacturing and manufacturing indexes rose in May after historic plunges in April. Take a look at this chart from the article: 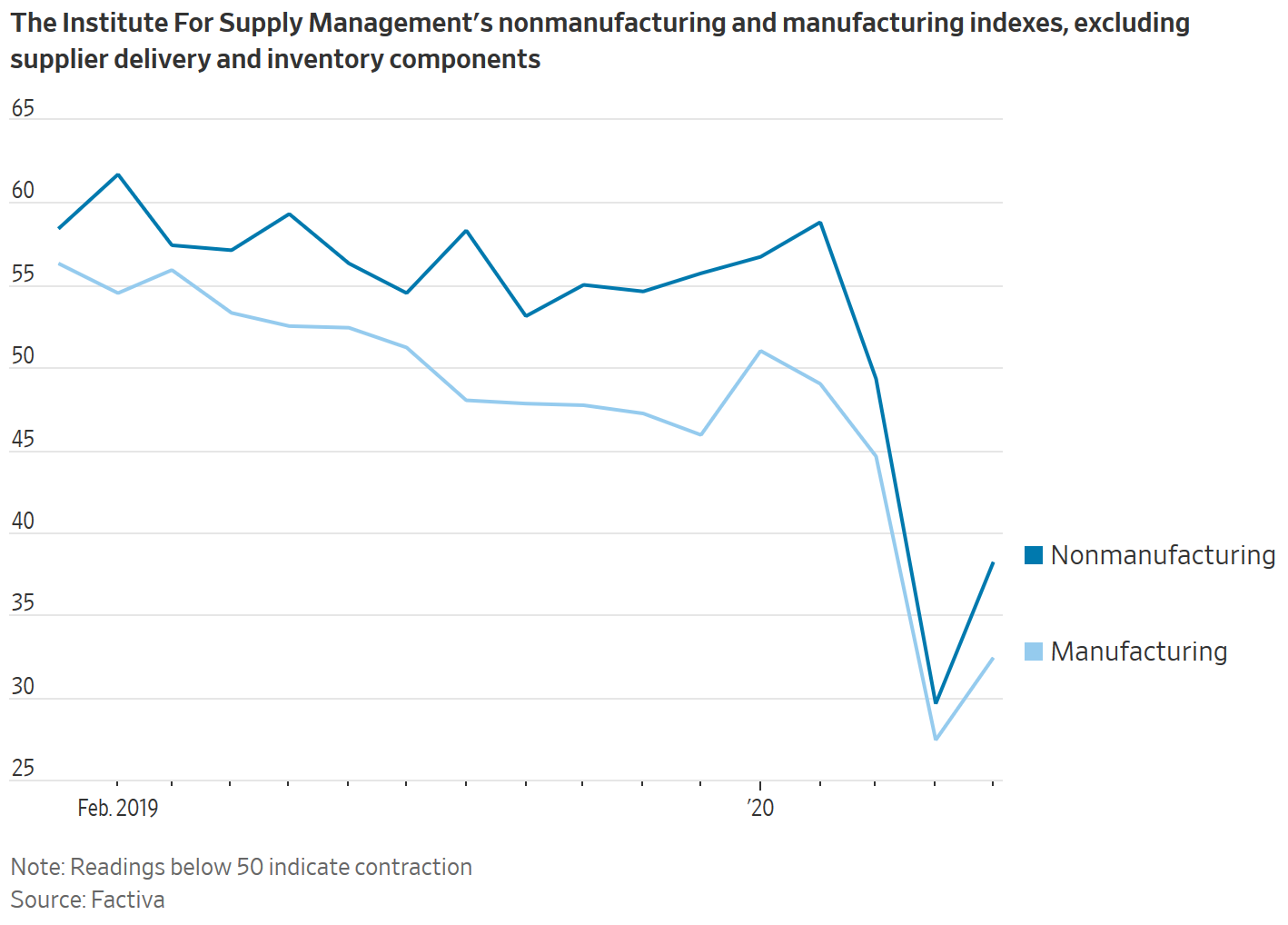 And, as this Washington Post article points out, “Unemployment claims for the last week of May were 1.9 million, the lowest since the coronavirus started spreading widely back in March, a sign that the economy may no longer be in free fall.” Here’s a chart showing the trend: 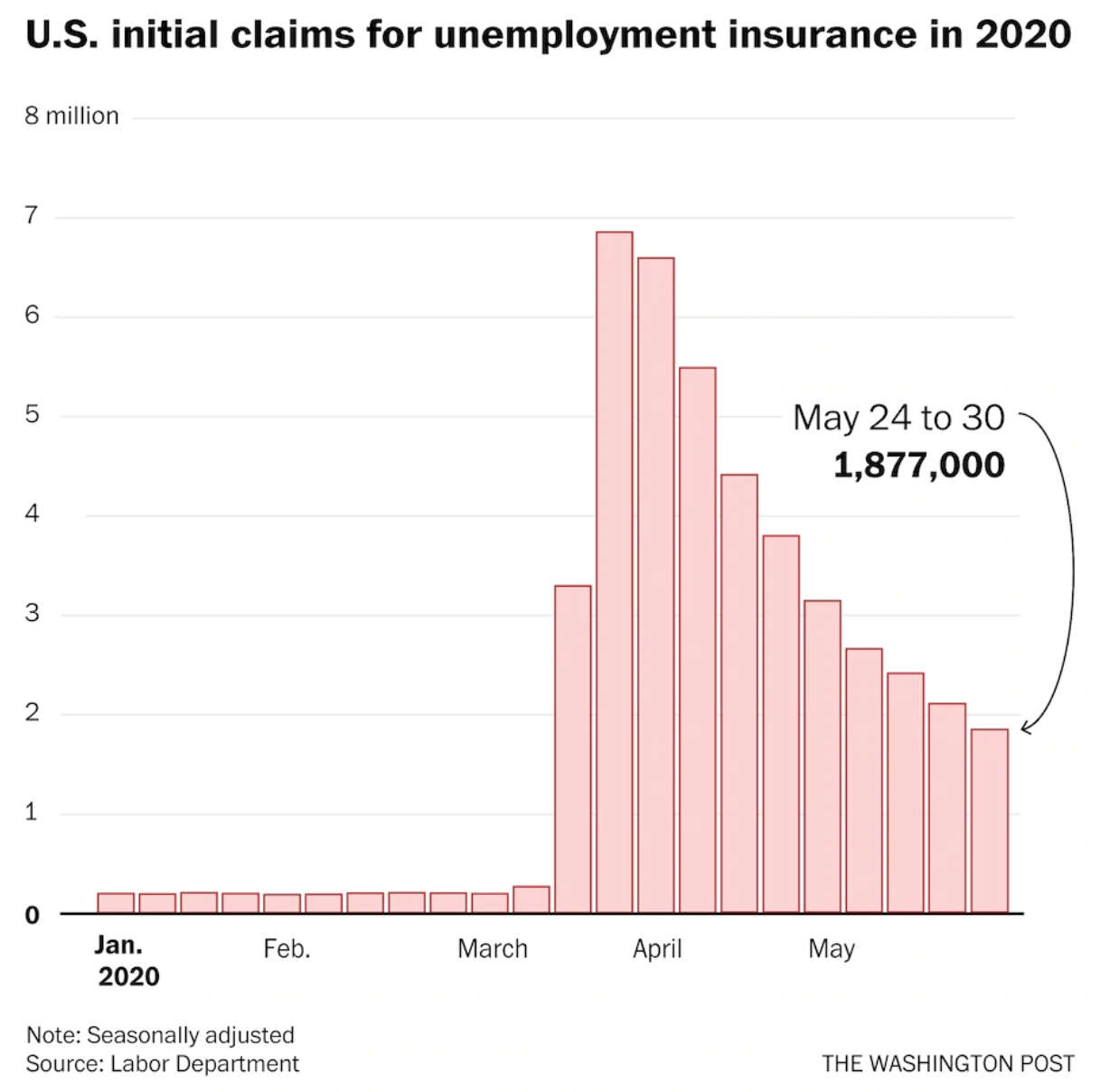 Furthering the bull case, the ADP Research Institute, following a horrific 19.6 million decrease in business payrolls in April, yesterday reported “only” a 2.76 million decline in May, less than one third of the median projection of a nine million decline. Here’s a chart from Bloomberg showing this: 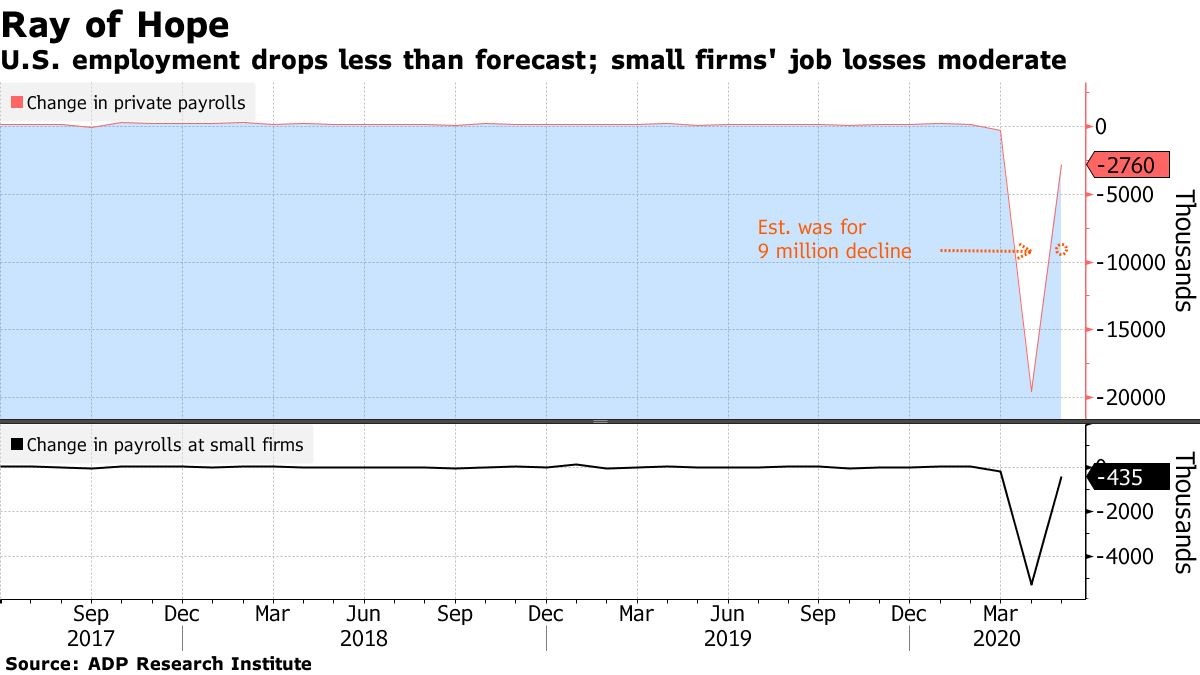 As for GDP, the steep drop in the second quarter “could point to a sharper recovery at least in the short term, said Ed Yardeni of Yardeni Research. He projects the third quarter to see a 20% rebound followed by a 5% gain in the fourth quarter.”

4) So what are investors supposed to make of all this conflicting data?

Honestly, I don’t know which is why I’m charting a “middle course” in my personal portfolio: I have 65% invested, mostly in blue-chip U.S. stocks, with 35% in cash to take advantage of any pullbacks.

For other perspectives, I turn first to this “Heard on the Street” column in today’s WSJ: The Nearly Nihilistic Market Rally. Excerpt:

So it matters a great deal, to the exclusion of almost everything else, that the rebound is indeed relatively quick. If the first stage of the rebound was about the realization that central banks would take extraordinary measures to prevent market distress and widespread defaults, the second hinges on the ability of policy makers to engineer a rapid rebound within a year or so, largely with fiscal policy.

5) My colleague Enrique Abeyta has been spot-on with his bullishness, which hasn’t wavered. As he told his readers yesterday

I’ve spent the past month or so explaining why the rally in stocks could continue. My core thesis remains the same today. It’s based on two main ideas

1. Sequential numbers will continue to improve

To support his second point, he wrote:

In the chart below, you can see the year-over-year change in M2 going back to 1960. We don’t have all the data yet for May, but through the middle of the month, it had continued to move higher 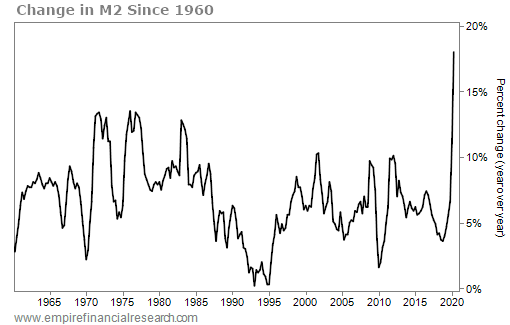 The increase in this measure is unlike anything I’ve ever seen.

Keep in mind that more money in the economy means more money to buy liquid assets like stocks.

Enrique then showed how even smaller increases in Fed-injected liquidity led to big rallies in stocks in the 1960s and during the global financial crisis, but he sees the closest comparison to the Internet bubble in 1999. He concluded:

Right now, I’m seeing a similar setup in the market through 2021.

With real analysis and an understanding of how stocks really trade, we have the opportunity to find stocks with huge upside. Today, some of the forward growth potential will likely get pulled forward into the excitement in the stock market.

Now is a great time to load up on long-term growth stocks that can turn into 5- or 10- baggers and Enrique has a nose for finding them.

In a documentary-style video, he recently “pulled back the curtain” on the unique investment strategy he uses in his brand-new Empire Elite Growth newsletter. And in a market environment like the one we’re in today the profit potential from his ideas skyrockets.

You can learn all about it by clicking here.

The post The Economic Data Supports Both Bull And Bear Cases appeared first on ValueWalk.