The markets have been able to climb a wall of worry over the past 3 months in a move that’s pushed the Nasdaq to a new high in price, with the S&P 500 within 6% of its peak reached in mid-February.

The significant rally over the past 3 months does not mean the markets are out of the woods quite yet, however, as new uncertainties surrounding the containment of COVID-19 infections is clouding economic recovery prospects. There’s also uncertainty regarding the development of a viable vaccine to combat the deadly virus, not to mention a November election that’s up for grabs. Despite the uncertainty, many startups are viewing this as an ideal time to raise capital, as higher valuations has invigorated the IPO market. In fact, ten companies went public in April, followed by 15 in May and 18 so far in June.

Of these recently listed IPOs, the average return has been 40%, which points to a strong appetite for companies that haven’t yet proven themselves. This could be because many appear to be plays on the “new ways people are operating” in the face of an unprecedented pandemic. 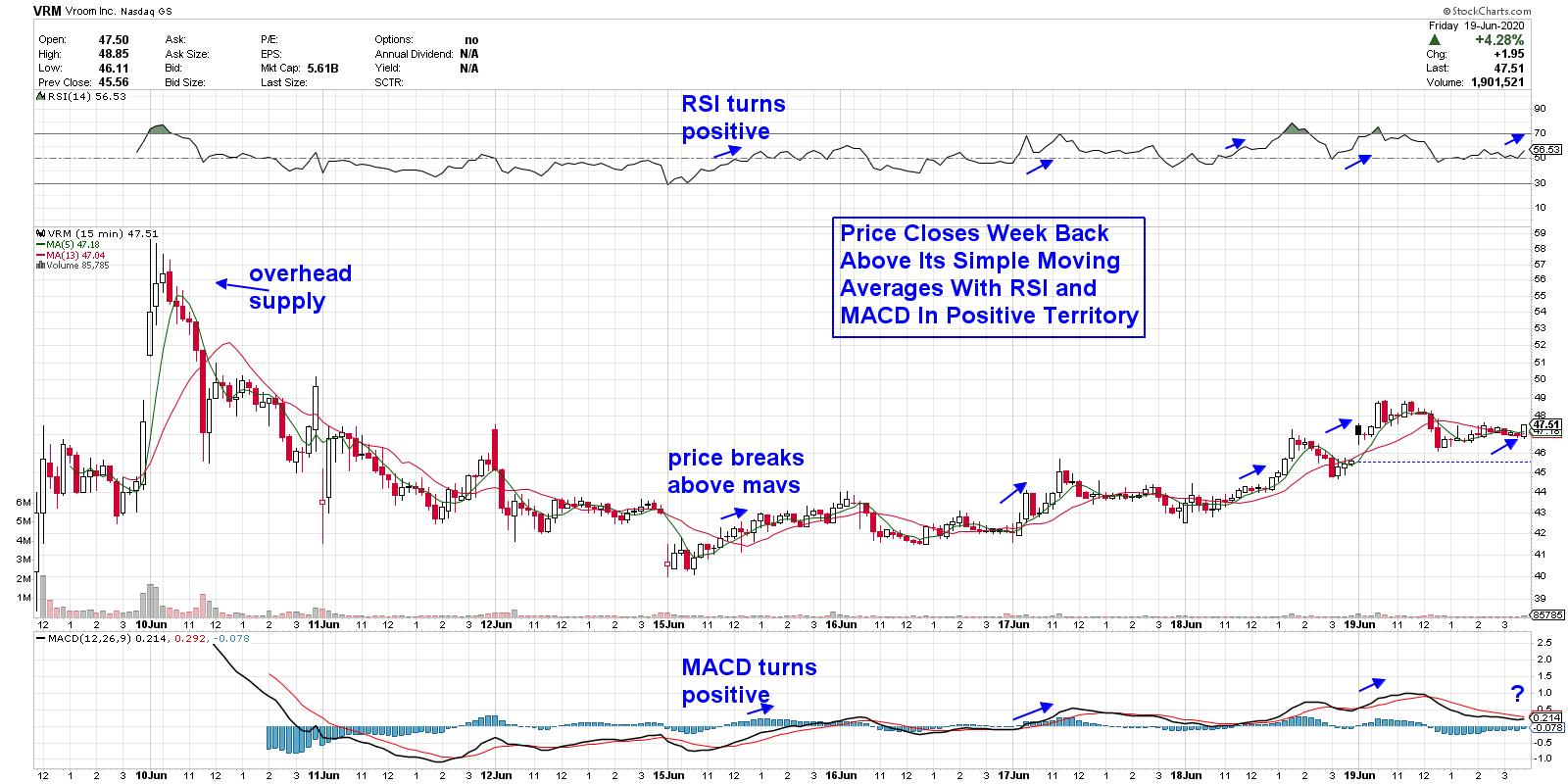 Let’s take a look at Vroom Inc. (VRM), which came public earlier this month. The company operates an e-commerce platform for buying, selling and trading-in used cars online. And while VRM is not posting earnings just yet, the company did see a 37% rise in year-over-year revenues in their first quarter.

Investors are hoping the company will replicate competitor Carvana’s (CVNA) meteoric 775% increase since coming public three years. The move points to consumers that continue to embrace shopping online, even for high-priced vehicles. In fact, CVNA hit another new high this week, despite not turning a profit after 23 consecutive quarters of triple-digit revenue increases.

With less than 2 weeks of price history, you’ll need to revert to an intraday (15-minute) chart for guidance on the near-term prospects for this stock. VRM posted a 10% gain last week that came in waves, with price breaks back above its 5 and 13 simple moving average coupled with a positive RSI and MACD as being an ideal entry point. 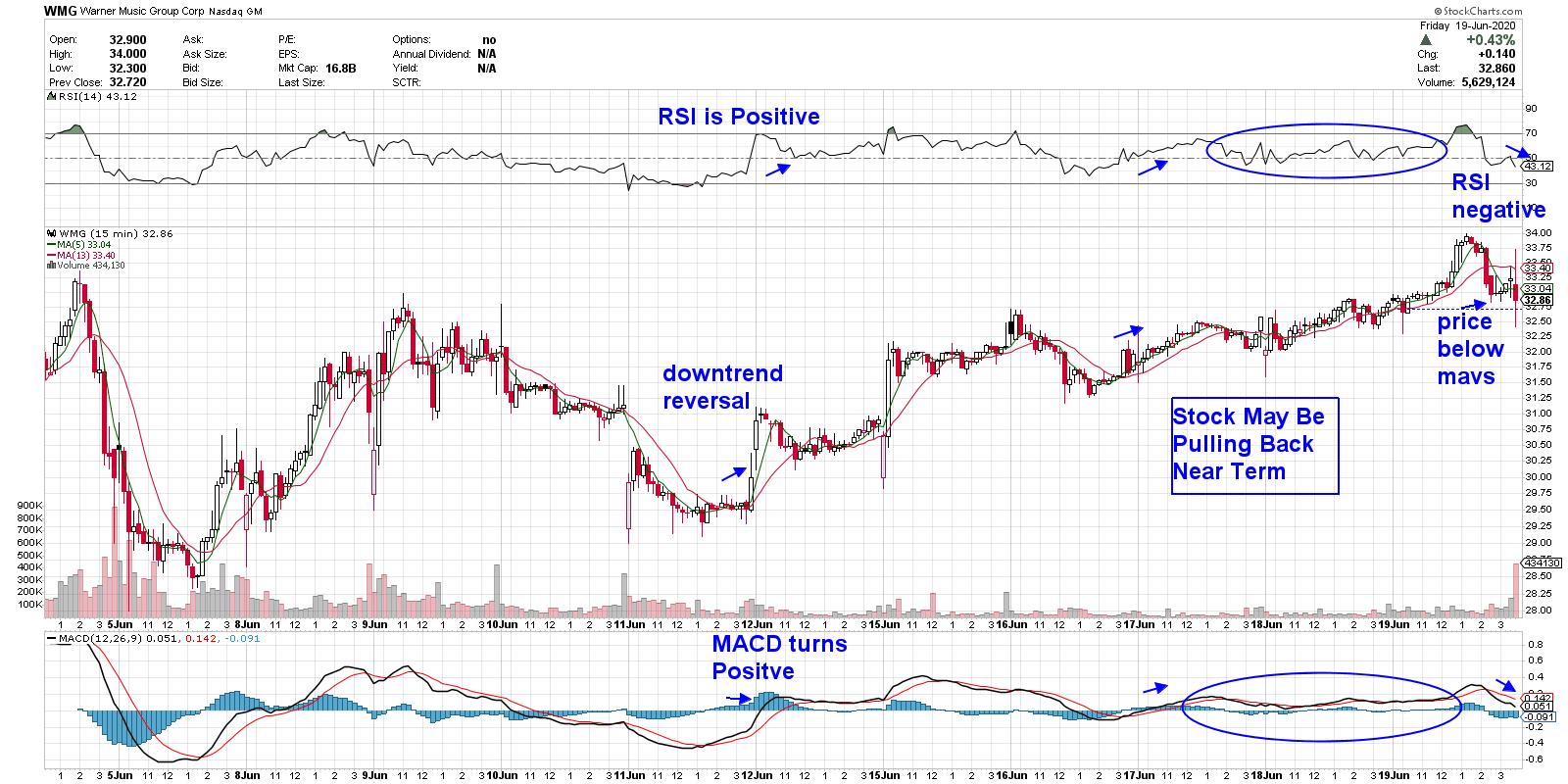 One of the largest new offerings this year is the from Warner Music Group Corp. (WMG) – the world’s 3rd largest recording label. The company posted net profits last year with a majority of revenues being generated from their recorded music catalog. Estimates for next year are calling for 0.73 earnings per share, which is a 232% increase in earnings over estimates for this year.

With consumers remaining at home more, the licensing of movie and TV content has seen a tremendous pickup in demand. A look at WMG’s intraday chart shows a similar pattern to VRM, where slight intraday pullbacks are met with an upward shift in momentum. This action points to upside bias over the near-term. 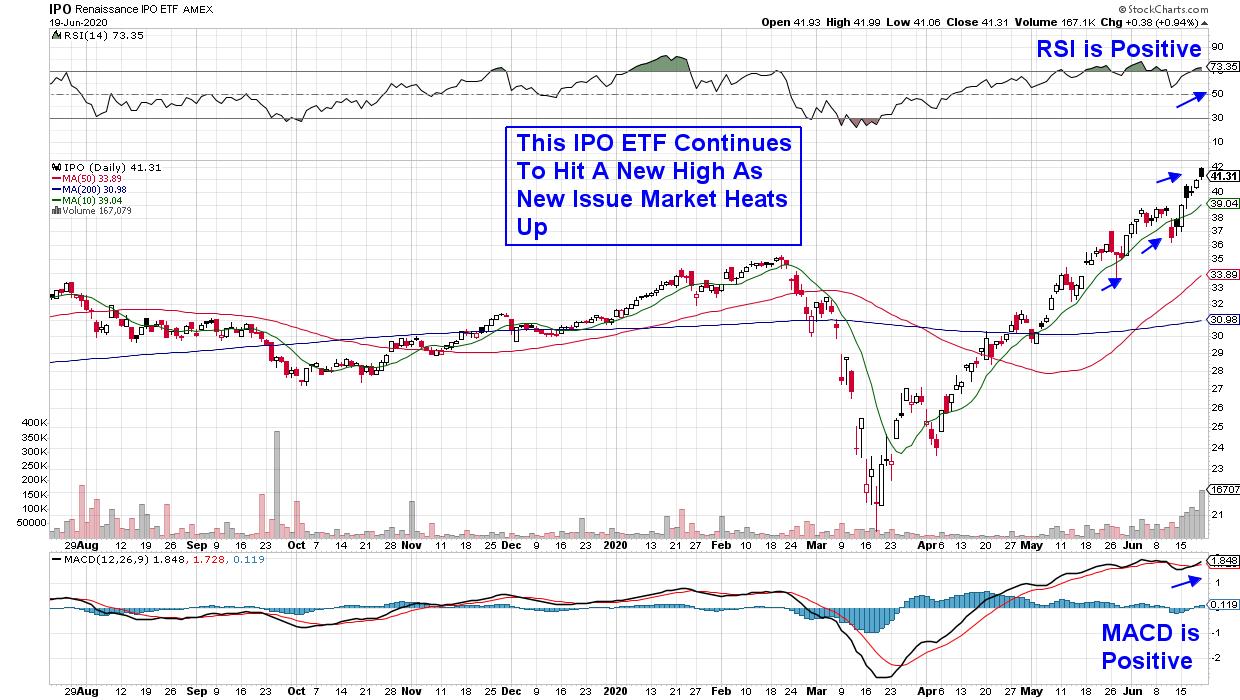 For those who would rather gain exposure to these and other newly listed companies using a diversified ETF, you may want to consider the Renaissance IPO Index (IPO). The fund currently holds 50 stocks with each accounting for less than 10.5% exposure. With Technology being their top sector, followed by Healthcare and Communication Services, this IPO has recently seen their shares charge to new highs. A close look at the daily chart above shows that a pullback to its 10-day moving average is an ideal buy point for this upward-trending ETF.

Nasdaq President Nelson Griggs sees the number of new listings continuing to ramp up into the summer months, with Healthcare, Technology and Consumer related companies dominating the calendar.

The pickup in interest in riskier IPOs points to the overall strength in the current market environment. For those who’d like to be alerted stocks poised to outperform that have solid earnings already in place, I urge you to take a trial of my top performing bi-weekly newsletter.

The MEM Edge Report not only provides precise entry points among fast moving growth stocks, but will also alert you to when that stocks uptrend has paused or ended. In addition, you’ll gain insights into market sectors that will provide you with the confidence to take advantage of the current strength in the markets. Take a look at an example here!