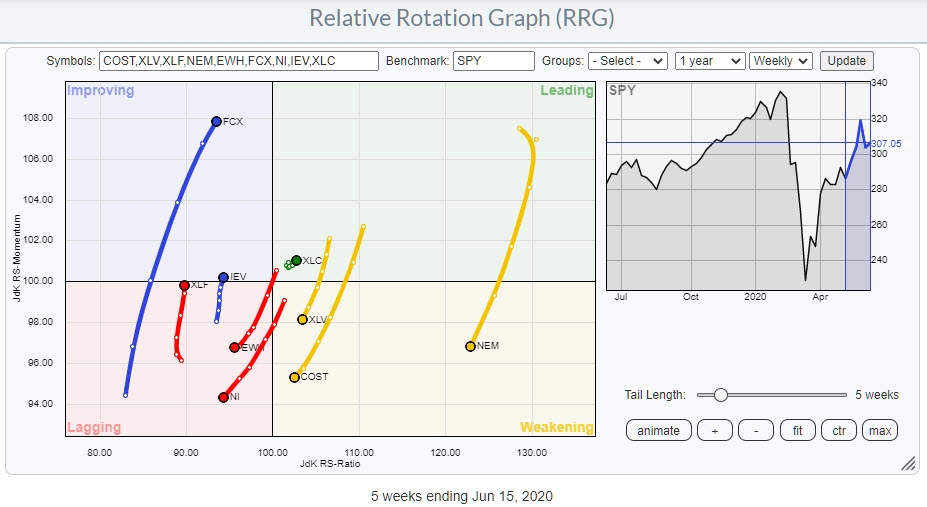 In my weekly Sector Spotlight Show on StockchartsTV, I have a segment on Pair Trading Ideas from time to time. Initially starting out as 1-1 pair trades ideas and later changed to a basket of Long ideas vs a basket of short ideas.

In the episode that I recorded yesterday (6/15) which aired today (6/16 10.30am ET) and is now available on the youtube channel. I did not have enough time to cover these baskets and some new additions so I will do that here in this article.

The last time I updated these baskets I ended with three long ideas (SPY, XLC, and XLV) and three short ideas (IEV, XLF, and EWH).

In both shows I looked at some individual stocks both from the long as well as the short side.

The RRG at the top of the article shows all stocks and ETFs that are currently in the basket including the new additions. The RRG below shows the same universe on a daily time frame. 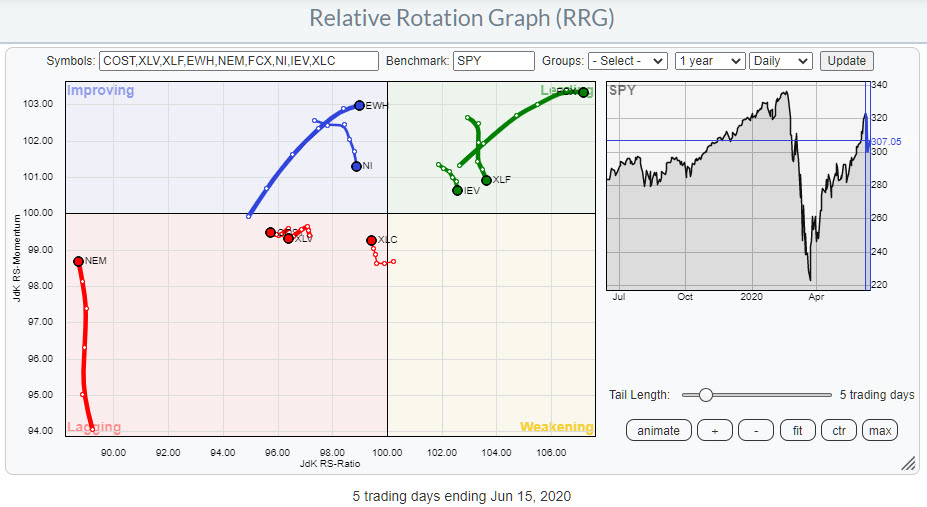 I am adding two longs and two shorts to my baskets. On the Short side COST and NI and on the Long side FCX and NEM.

Just to make sure: All these observations are for educational purposes only, showing how Relative Rotation Graphs® can be used to select sectors and stocks for both long and short positions. Nothing should be seen as a recommendation or advice to buy or sell. 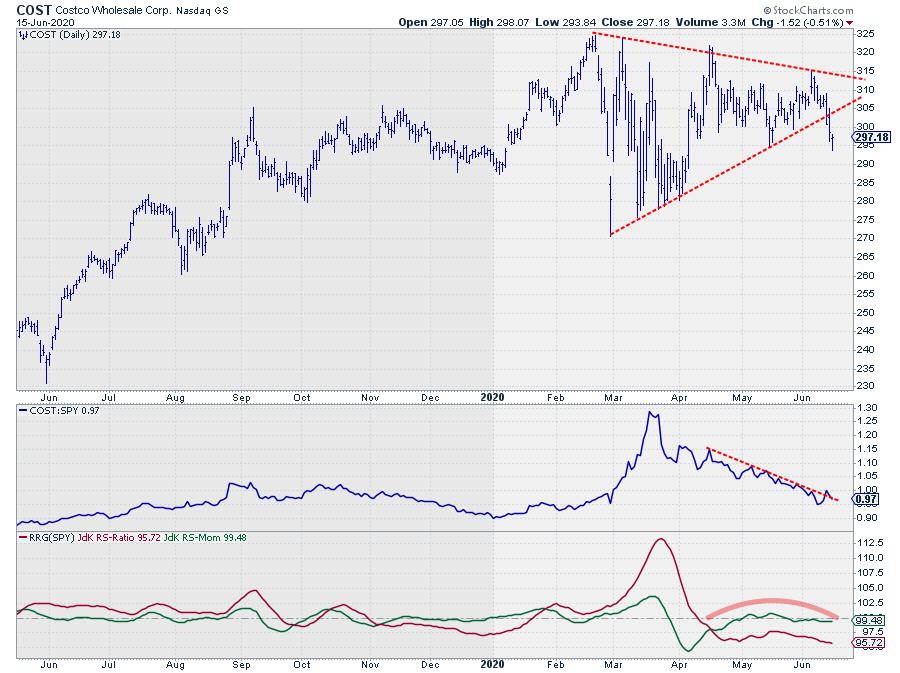 On the daily RRG for the staples sector, COST is well inside the lagging quadrant and continuing to lose relative strength.

The RRGs in this article have SPY as the benchmark and therefore position COST slightly different but still at a negative heading and in a relative downtrend.

The price chart confirms the relative weakness as COST just broke out of a large consolidation triangle in downward direction while RS-Line vs SPY put in a new lower high, confirming the existing relative downtrend. This can also be seen in the RRG-Lines where the JdK RS-Momentum line is crossing back below 100 pushing the daily tail further into the lagging quadrant.

All in all enough reason to approach this stock from the short side. 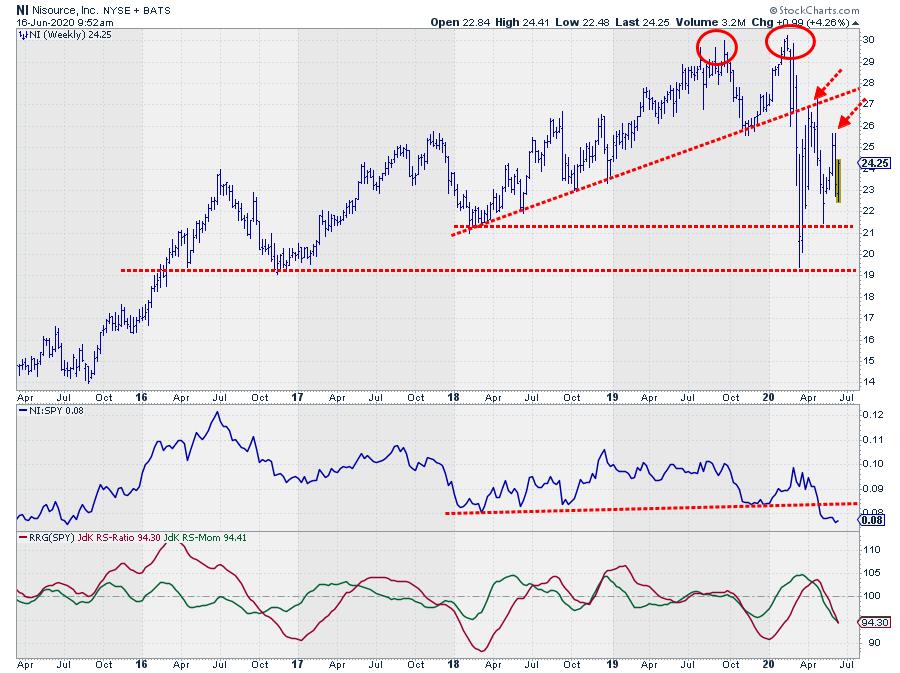 In the RRGs above, against SPY, you will find NI well inside lagging on the weekly time frame and rolling over inside improving on the daily time frame.

The weekly price chart in combination with relative strength is confirming this weakness. Price broke below an important rising support line and has now already formed two lower highs after the February peak.

The break lowe in relative strength is very convincing and it is pushing the RRG-Lines sharply lower. With limited upward potential and increasing downward risk I prefer to approach NI from the short side. 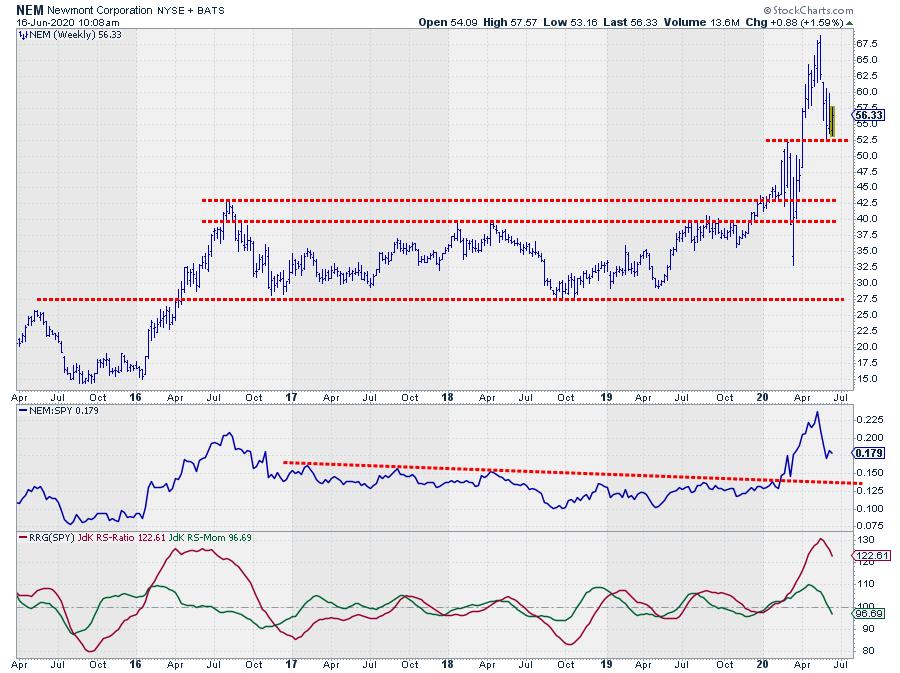 The materials sector showed a strong rotation in the past few weeks. NEM has been one of the big drivers for this improvement. When you run the RRG for all members vs XLB you will find NEM far away to the right and inside the weakening quadrant (see the high RS-Ratio level and the RS-Momentum line just below 100). On the daily RRG is inside the lagging quadrant but rising almost vertically on the JdK RS-Momentum scale.

The upward breaks that are visible on the weekly price chart are supportive of a further rise in price, especially now that the recent decline of the $ 68.84 peak has held above the previous high that now started acting as support near $ 52.50.

As long as $52.50 holds the upward potential for NEM is bigger than downside risk with strong relative strength. That makes it an interesting stock for Long positions. 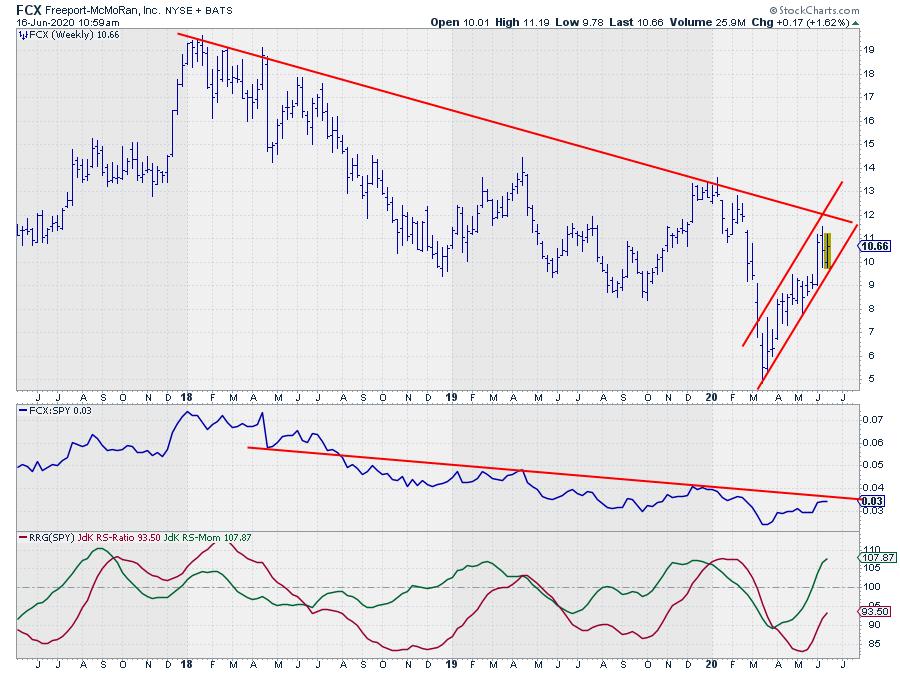 FCX is another stock in the materials sector. Where NEMhas been one of the drivers for XLB in past months, FCX was lagging and in a relative downtrend for a long time. The chart above shows that price is moving lower already since the peak at the start of 2018 and relative strength started to deteriorate a few months later.

The good news is the strong up-move in RS-Momentum, which puts the weekly tail vs SPY high up in the improving quadrant and moving towards leading. On the daily RRG FCX is already well inside the leading quadrant and currently losing a bit of momentum.

With price and RS approaching resistance I am going to assume that the current momentum will be able to push through these levels and add FCX to the basket as a long idea. A more conservative approach would be to wait for an actual break above resistance.

This leaves us with the basket as shown below at the moment. 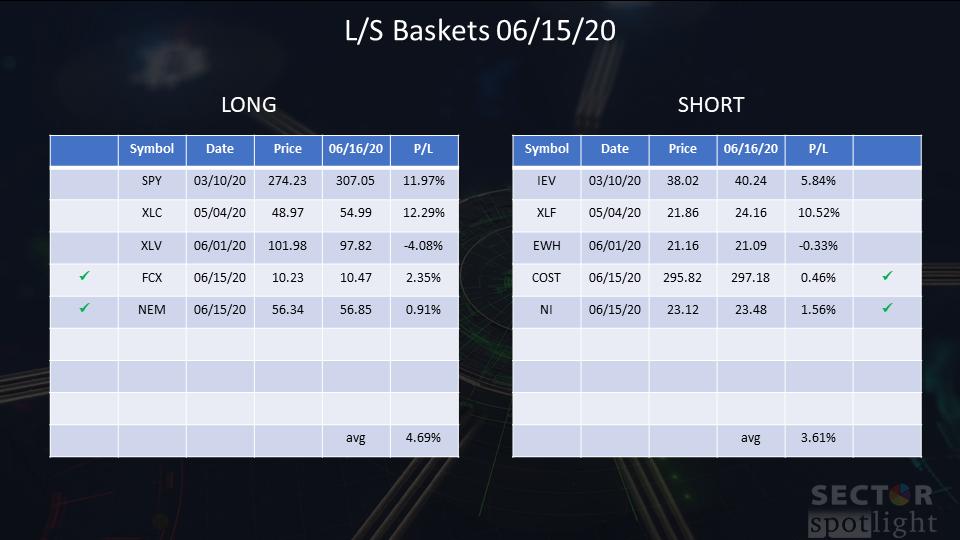