May 25, 2020 admin
These indicators are mostly for travel and entertainment – some of the sectors that will probably recover very slowly. 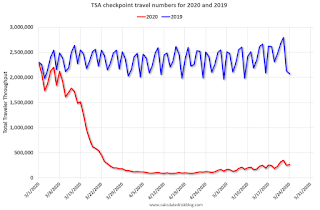 That is a decline of 87.1%. There has been some increase off the bottom, but it is pretty small compared to the normal level of travel.

The second graph shows the year-over-year change in diners as tabulated by OpenTable for the US and several selected cities. 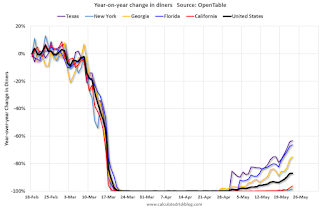 California and New York are still off 100%.

Some states – like Texas and Georgia – have started to open up. In Texas, diner traffic was only down 63% YoY. 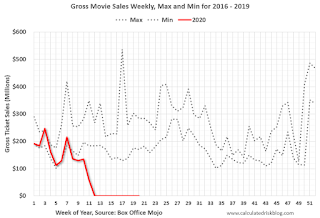 This data shows domestic box office for each week (red) and the maximum and minimum for the previous four years.  Data is from BoxOfficeMojo.

Note that the data is noisy and depends on when blockbusters are released.

Movie ticket sales have been essentially at zero for nine weeks.

Basically movie theaters are closed all across the country, and will probably reopen slowly (probably with limited seating at first). 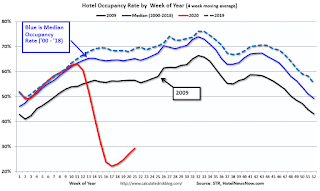 2020 was off to a solid start, however, COVID-19 has crushed hotel occupancy.

STR reported hotel occupancy was off 54.1% year-over-year last week.  Occupancy has increased slightly over the last few of weeks. 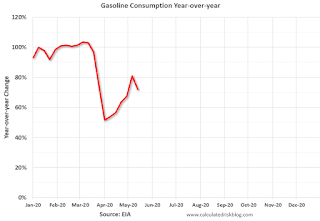 The final graph is from Apple mobility. 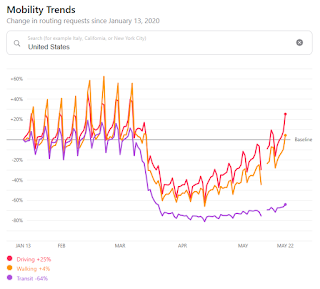 This data is through May 22nd for the United States.

According to the Apple data, driving is back to normal, walking is a somewhat below normal, but public transit is still off 64% from the pre-crisis level.