Back in 2006, my first book, Trading Time: New Methods in Technical Analysis, dedicated over 120 pages to the multitude of conclusions that can be derived by analysis of Swing Points, including how long trends can last before reactions, the strength of the trend, trend beginnings, exhaustion points and the connection between Price, Time and Space. I won’t pretend it is an easy read, and in truth I only scratched at the surface as I unearthed more and dug deeper. The reality was the book had to end somewhere and I was mentally exhausted from writing and collating it. What I didn’t realize was the Pandora’s Box I had opened, and it was actually I few years later, when someone who had read the book and taken on its theories, pointed out the prophetic nature of the final paragraph of the whole book.

“In conclusion, it can be seen that, with a very basic tool, a huge amount of information can be obtained. It enables a stop to be trailed and has the advantage over momentum indicators in that they reference pure price action. Greater depth of understanding can be achieved by adding the concepts of Range and Volume. So far as Peaks associated with Volume is concerned, my work is not complete, but the initial findings look promising.”

Hi/Lo Count provided much of the glue that knitted the concepts together. Like many of the Fourth Dimension suite of studies, that actual calculation is relatively simple. All it does is record the number of bars between changes in Swing Highs (HiCount) and Swing Lows (LoCount). The default for what defines where a Swing point is set is that that the middle bar of five is the highest or lowest point. No consideration beyond that is given to what the 4 bars on either side of the middle one have moved in relationship to each other, although further analysis showed that other patterns and signals could be used in conjunction with it.

In the process of building thousands of systems for people over the years, the use of Swing Points as a trailing stop to a trend following trade proved to be one of the most consistently reliable in terms of robustness. This applied to any market and any timeframe. The problem with it was that, when trends were strong, the Swing Point didn’t move, making its use as a trailing stop unworkable at such times, as the trailing level was simply too far away. This led to the development of Hi/Lo Count to quantify such times and then switch to a more dynamic trailing stop or exit strategy.

What I didn’t realize when doing this was the depth of relationships that the value of and subsequent resetting to zero opened up. I am not going to repeat what is in the 120 pages, but instead I’ll highlight one of the common themes that the redefinition of data and the use of a higher timeframes to the timing one (Daily) can achieve.

Looking at data first, when building short-term systems on FX, a stop would often be triggered via the breaching of a Swing Point in the middle of the night. The issue was that, as there was little activity, it would take equally little to say that the trade was over. Various ideas were muted, including redefining what the trading day actually was, Constant Volume Bars, and the use of Heiken-Ashi charts instead of traditional ones. The advantages with Heiken-Ashi were that, if the trend was up, lows would often be redefined and therefore not create a Swing Point. In the end, it took a combination of Heiken-Ashi based Constant Volume Bars to smooth the data sufficiently and remove the extraneous noise.

A basic Heiken-Ashi bar is defined as follows:

Heiken-Ashi candlesticks are a derivative of Japanese candlesticks, but, rather than using actual open, high, low and close values, this study uses recalculated values.

Whilst this means that absolute highs and lows are not what necessarily traded, the trend and, more specifically, the relation of the Open to Close can be very different. The chart below shows an example of the stock Centene (CNC) weekly, with the actual weekly data above and the redefined Heiken-Ashi below. Two things stand out: Firstly, whilst there are down weeks in the traditional sense, Heiken-Ashi is always up. This is an excellent way of understanding the strength of the trend and provides an instant partial exit strategy – that simply being, in an uptrend, wait for the first down bar. This is valid on any timeframe and any market. Secondly, there were times when the Swing Points were redefined, albeit infrequently and subtlety, but significant nonetheless if trying to stick with the trend. 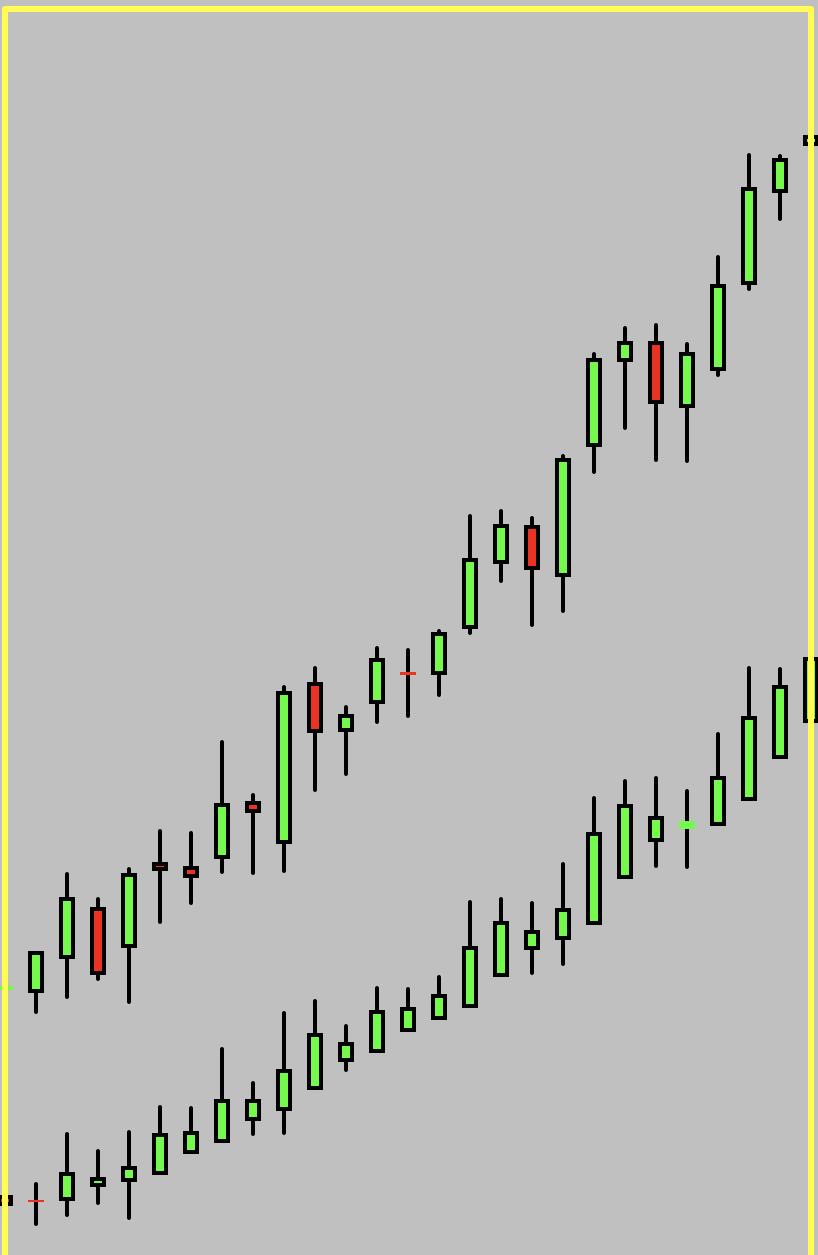 Ask any professional trader what one of the most important things to them is, and most will have timing up there near the top of list. When I pressed further and said the timing of what, I usually got a puzzled look as they said, “the timing of the entry of course.” All well and good, but only a small percentage ever said the timing of my exit and profit point, and even fewer said how long I should be in the trade. If you think about it, they are just as important, the reality being that, if you manage risk, especially volume associated with risk and leverage, in combination with sound exit strategies (that are good enough to be entry points), plus a clear understanding of how long the trade should last, the entry point becomes almost irrelevant.

Extensive testing over many years revealed consistent patterns about how long a trade should typically last, depending on how close the price was entered to the trend’s beginning. This was especially useful in short-term trading, whether it be in relationship to length between Swing Points (HiCount/LoCount) or the measuring of how long price can remain Overbought or Oversold (Stack), to how long a trend can remain in one timeframe before it must move up a timeframe in order to extend that trend (Stochastic Steps).

For HiLo Count the normalized threshold is 15 to 20 bars. Once there has ben no reset with a new Swing Point from this zone, one is due. This proved to be consistent in any market and and timeframe, except on Individual stocks on historical data. It makes sense for it to be that way, as most asset classes have an element of mean reversion, whilst stocks can trend for extended periods. Therefore, the threshold is higher, at 25 to 30. Whilst it is true that, on daily data, a period of reflection or retracement is due once price gets into this area, it does not necessarily mean that the bigger trend is over. A trend of 30 days on an individual stock is not overly long.

This meant the use of Higher Timeframe HiLo Counts than daily. The normal way to create this is to use a standard daily chart, but then modify the study to weekly and use Heiken-Ashi. The chart below is of Centene (CNC) once again. A frequent darling of the market over the years and capable of extended trends when it becomes fashionable, it enjoyed a special trend in 2018, as both the Hi and Lo Count went above and beyond the 25 weeks without creating a Swing Point. It is unusual for both counts to extend so far, but, as long as they do, the trend is up. Just after the top, both counts reset, highlighting immediately the increased risk in being long. The three circles represent UFOs and highlight the importance of connecting that pattern with other analyses. Whilst the first instance is an exit signal at the very least, the second and third represent shorting opportunities in order to have a more balanced portfolio.

The second signal occurred as price made new all time highs and reversed. News that day and an excuse for the reversal was the retirement of a senior executive.

The third signal and most significant occurred In February. In the “Quantifying Divergence” article in this blog, I talked about the ability to create divergence as a continuation pattern. This is qualified in UFO’s case by the current pattern, occurring from a lower point than the previous time it happened. Often, UFO’s are associated with news, and this signal was no exception. Centene announced its results and increased its guidance for 2019. UFO signaled a classic “Good News Bad Action” and an extended decline began.

I can be contacted at shaun.downey@aol.com to answer any questions.